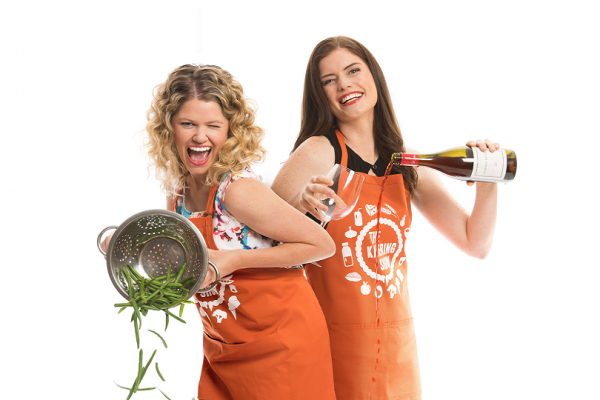 If you’re a fan of Broad City, the new Ghostbusters or anything costarring Amy Poehler and Tina Fey, have we got a web series for you. The Katering Show, which hails from Australia, is yet another example of biting satire served up by a pair of mismatched BFFs. This time around the frenemies are Kate McLennan and Kate McCartney, two talented writer-comedians making comic mincemeat of foodie culture, food intolerances, and cooking shows in general. If you worship at the altar of Top Chef and Chopped, this may not be your plat du jour. If, however, you’ve had more than your share of artisanal peanut butter and free range ganders, then these two Kates are a delicacy worth indulging in.

As the lead host of The Katering Show, McLennan is the more upbeat of the duo. She’s out to celebrate fashionable trends like ethical eating and pop-up restaurants with a perky optimism that belie her middling culinary skills. She fails at five different ways to make ramen, prepares a questionable ragu using organic, grass-fed kangaroo meat (a “roogu”), and dives into a short-lived sugar-detox because “the best way to live forever is to quit sugar.” Uh, right. Like many a deluded foodie, McLennan needs no help sabotaging herself in the kitchen, but she has help to do this anyway. Enter the co-host.

McCartney, for her part, isn’t just allergic to the latest food fad. She’s also intolerant to many ingredients: “Doctors told me if I didn’t give up these foods, I’d probably keep shitting my pants.” She’s got nothing positive to say about gluten, dairy, fruits, nuts, and pretty much everything else that tastes good to human beings. As someone with serious food allergies myself, I personally appreciated her ability to churn comedy butter out of the painful milk of auto-immune dysfunction. (Is anyone counting the food puns here?)

Like many comedy duos, the contrast between McLennan’s joie de vivre and McCartney’s misanthropy proves the basis for laughs. But our two Kates also get a lot of mileage out of mocking food fashions. If you’re fed up with the incessant Instagramming of food, you’ll enjoy the “Food Porn” episode where the chefs make a cupcake that’s all varnish and glue. A natural birth moment invades the kitchen when the ladies (now new mommies) cook-up a “plasagna” — a lasagna made from McLennan’s actual placenta followed by breast milk ice cream. Ironically, but perhaps thankfully, the lactose-intolerant McCartney can’t enjoy the creamy treat sourced from her own bosom, a paradox the Kates ponder in the closing credits.

At seven to ten minutes per episode, The Katering Show serves up a snackable comedy indeed. For fans of offbeat, observational meta-comedy with a sharp eye for irony, there’s a smorgasbord of fun to feast on here. You can catch Season 1 for free on YouTube (link here) or stream Season 2 in the U.S. at fullscreen.com.

0 comments on “A Food Show for the Rest of Us”