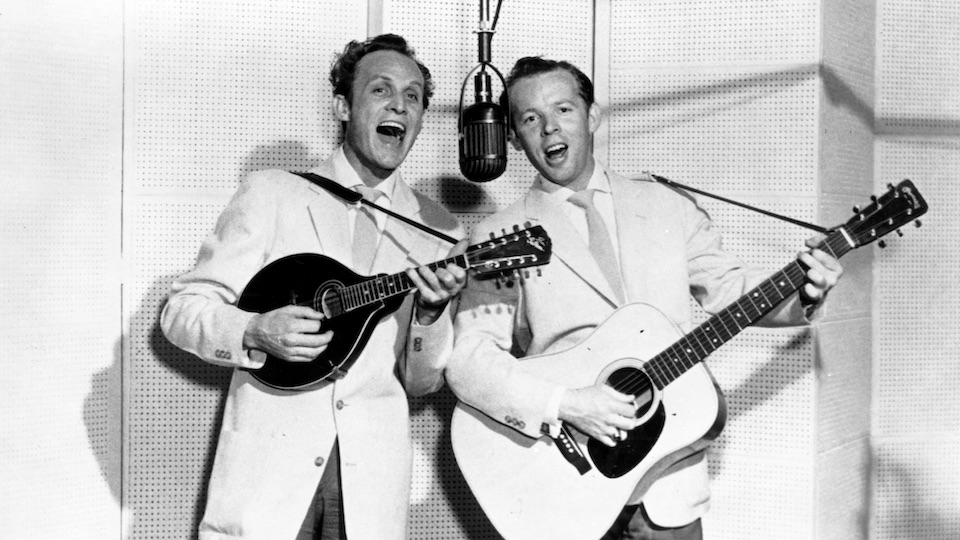 The Louvin Brothers’ recordings are an integral part of American musical history, but with the release of Love and Wealth: The Lost Demo Recordings, history has been rewritten. The songs Ira and Charlie Louvin released in the ’50s, like “I Don’t Believe You’ve Met My Baby,” “Knoxville Girl,” “Cash on the Barrelhead,” and “When I Stop Dreaming,” are an irreplaceable part of the fabric of country music, and the Louvins’ body of work was enormously influential not only on subsequent generations of country artists but on rock ‘n’ roll as well. This newly discovered treasure trove deepens our understanding of the Louvins’ legacy.

What most people didn’t know until Sundazed/Modern Harmonic unveiled the 29 tunes on Love and Wealth is that there was a secret stash of Louvin Brothers recordings hidden from sight for some six decades. Between 1951 and ’56 the Louvins recorded publishing demos of dozens of songs they had no plans to release themselves. The duo was enormously prolific during that period, and after laying down these tunes to be pitched to other artists, they seemingly had no qualms about moving on from them.

“Most publishers from back in the day kept tape copies of demos,” explains the album’s producer, Jay Millar, “comprised of the various compositions they were acquiring, whether they were released or unreleased. Very often these publishing reels would contain various artists and various compositions on a single reel.” Sundazed/Modern Harmonic president Bob Irwin has been working with the Masters International catalog (now under the umbrella of Sony/ATV Publishing) for some time, and he had the opportunity to do some spelunking through their archives that led to an astounding discovery.

“Several years ago, Masters International acquired the massive Acuff-Rose publishing company,” says Millar, “and upon doing so, simultaneously acquired hundreds upon hundreds of [publisher] Acuff-Rose’s demo reels. Bob had the privilege of being able to hand sort through these reels, culling out countless things of interest. While sorting, Bob discovered six old, brittle, poorly marked reels that simply said ‘Louvins’ on them. Bob brought them to our studio and carefully played them back. They revealed themselves to be the gorgeous, plaintive, and sparse yet fully formed demos that Ira and Charlie provided directly to Wesley Rose.”

The Louvins’ songwriting skills being what they were, the songs they cut for those publishing demos were indeed picked up by plenty of other artists, but beyond that, the Louvins left them alone. Country music king Roy Acuff recorded “Streamline Heartbreaker” and “Bald Knob, Arkansas,” for instance. Johnnie & Jack cut “Take My Ring From Your Finger.” Bluegrass star Carl Story recorded this collection’s title track. And many others artists helped themselves to the tunes offered up to them on the recordings that are released for the first time on Love and Wealth.

Hearing the Louvins’ own versions of these songs after all these decades is a revelation, not just for historical reasons, but because there’s a whole batch of recordings by one of Country’s greatest duos that we’ve been denied until now, and they sound as stunning as anything the Louvins officially released in their lifetime.

“Hearing these for the first time, Bob got goosebumps,” says Millar, “feeling like a miner that had just hit a vein of gold. Unearthing a find like this is quite exceptional; these are the things that we live for, especially 30 years into the reissue business.” A release like Love and Wealth is also the kind of thing lovers of The Louvin Brothers’ immortal catalog live for, they just never knew they’d been waiting all their lives for it until it appeared.