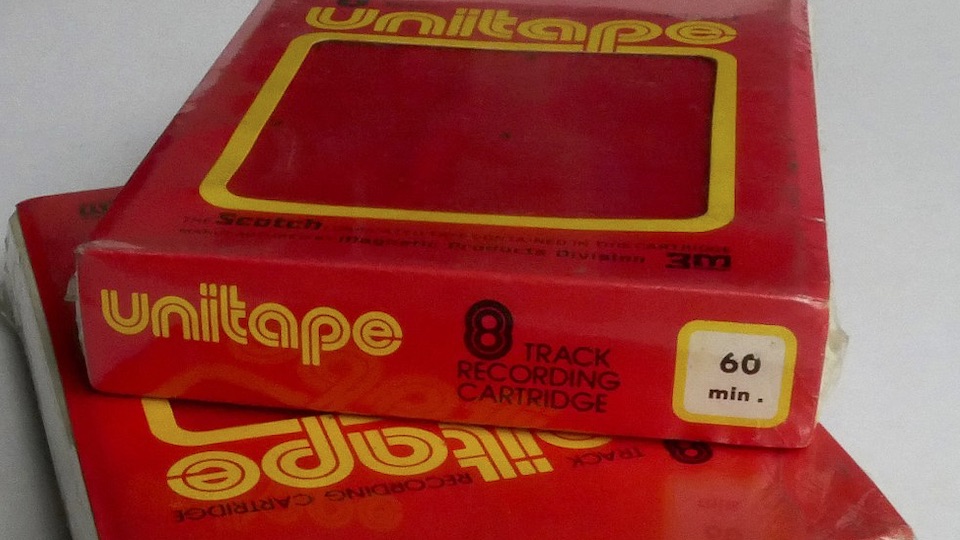 The old box of 8-track tapes sat on the closet floor, untouched and unwanted for years. When it was pulled out into the light, the contents looked more like the inside of a gumball machine than it did the music of a bygone era. Bright red, orange, blue, and florescent green cartridges were scattered among the more common black or grey. As I moved the top layer of tapes this way and that, I noticed that the box contained the type of music I’d hoped. Rock. There was the usual fare of Foghat, Styx, Rush, Clapton, and the like. But one cart caught my eye, one of those homemade jobs recorded on a blank cart. Scrawled on the spine in green letters was the word, “Beatles.”

“What do you want for the box?” I asked the guy from work that had invited me over to see if I’d be interested in taking it off his hands. He knew I collected 8-tracks.

“Nothing. Take ‘em. Nice to see someone enjoy those things.”

The relationship between old-school rock fans and the 8-track tape can be complicated. The format is wonderfully nostalgic to be sure, but problematic too. When the tracks changed in the middle of your favorite song, well, that wasn’t exactly ideal. And since the spool of tape inside of those colorful carts played from the inside-out, there was no way to rewind them. Shortcomings aside, there is no disputing that 8-track tapes provided music fans with their first widely portable format. Later, as the public moved on to cassettes, then CDs, a few hard-core devotees of the 8-track, like me, remained.

The Beatles tape was unusual. Folks that took the time to record their own 8-tracks usually printed the tracklisting neatly on the front of the cart.  Oftentimes, the person added some artwork in the margins, folk art of the times. Ordinarily, blank 8-tracks served one of two purposes. They were either used to transfer an entire album onto tape, or even better, a way to compile a group of favorite songs onto one recording, aka a “mixtape.” What was on the Beatles tape? Rubber Soul? Abbey Road? Was it a compilation of someone’s favorite Beatles tunes? In any case, I couldn’t wait to find out what songs hid inside.

Hold on, not so fast. My mystery “Beatles” cart was not playable. Not yet. Old 8-tracks are often a mess inside. The foam padding tends to rot and crumble away. Splices almost always break, and pinch rollers fill with gunk. The tape could be fixed; diehard collectors often recondition cartridges and give them new life. But cracking open an 8-track and replacing its parts is an art form, and it takes practice. And it takes lots of patience too, which I don’t possess. When my pipes break, I call a plumber. If sparks fly from one of my electrical outlets, I call an electrician. When my 8-tracks break, I call Daniel Gibson.

Daniel and Kathy Gibson opened Kate’s Track Shack in 1998. Since then, they have kept the format alive, and lately, seen it revived. Between custom orders for new artists, repairing vintage players, and running an online shop, they also repair old carts. Dan repairs around 4,000 carts a year for 8-track enthusiasts that, like me, would rather trust their slice of nostalgia to someone that knows what they’re doing. Dan got the cart in the mail, along with a few others that needed some TLC, and sent it back a couple of weeks later. All the tapes were good as new, a wonderful feeling, but none of the tapes held mystique like the blank Beatles 8-track.

What was on it? Which Beatles’ songs would you record to a blank tape?

A “Best of” collection?

Well, it was none of that. This tape was recorded off of the radio! KNUS (at the time, broadcasting out of Dallas, Texas) had apparently promoted an upcoming Beatles show, and some fan stood by at the ready with their 8-track stereo recorder. Remember doing that? Whoever recorded this show did a nice job of pausing the recorder each time the DJ spoke on air. This music fan wanted to stick to the songs, of course. Once, however, a DJ’s baritone voice burst through, perhaps by design.

Awaiting on You All, George Harrison, All Things Must Pass

I’d Have You Anytime, Harrison, All Things Must Pass

I’d Have You Anytime (concl.)

What Is Life, Harrison, All Things Must Pass

What Is Life (concl.)

How Do You Sleep, John Lennon, Imagine

The Long and Winding Road, Lennon-McCartney

From the setlist, it’s clear that the Beatles’ solo material was the focus of the broadcast. With a couple of obvious exceptions, these songs were NOT what I expected, but they pulled at me anyway. Post-Beatles work with an edge, or a mission, certainly some conflict. They were strange choices for broadcast radio at the time, but KNUS had started out as a rebel rock station and some of that attitude remained.

The last song on the tape, The Long and Winding Road, was released as a single in May of 1970, a month after the Beatles called it quits. Ironically, my magical mystery tape ends before the song finishes, and it left me wanting more. It left me wanting more just like every Beatles fan back in 1970 who stared in disbelief as Let It Be spun slowly on their turntables.

I thought about adding the tracklist to the cart label, but decided to wait, for now. This 8-track tape is very likely the only surviving recording of this particular radio show. Music transmitted during the golden age of FM radio, caught by a young fan, and forgotten for nearly half a century. For now, the long and winding road has ended for this 8-track tape. But someday I’m sure, it will end up in another cardboard box for someone else to sift through.