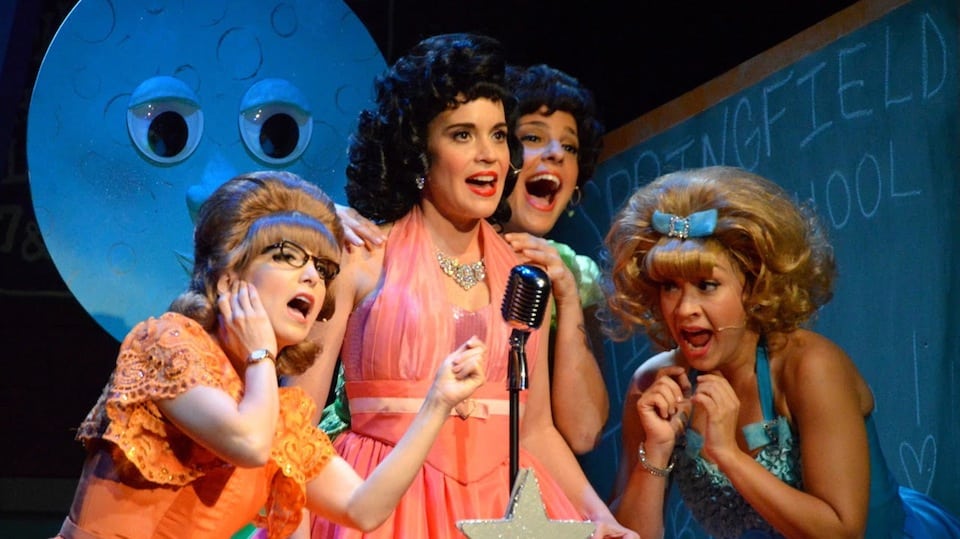 NYC has always been overflowing with more musical theater talent than Broadway could ever possibly accommodate all on its own. So where do these triple-threat performers go to sing/dance/act before landing their next — or first — gig on the Great White Way? On tour, sure. But also in smaller shows, off-Broadway. That was true in 2008 when The Marvelous Wonderettes initially premiered. And it’s equally true now with 2016’s still-running revival. Admittedly the current cast features more Broadway aspirants than stars but listening to these four women belt, croon, and harmonize their way through a medley of hits from the 1950s and 1960s, you feel pretty confident that eventually another one of them will land a role in a Tony-contending production at some point too. The question is who.

See Related: “Broadway May Have Found Its Own House Band in Sky-Pony”

Until we learn the answer, these four singer-dancer-actors are gleefully hamming it up in what feels like the quintessence of an Equity Showcase, a production for which the unionized talent clearly outsizes the 99-seat theatre and the intentionally low-rent set on which they perform. There’s not much of a plot to The Marvelous Wonderettes, mind you. Act 1 finds the four members of a beauty shop quartet performing — sometimes together, sometimes competitively — as the main entertainment at their own “super senior” prom circa 1958. Act 2 takes place at their 10-year reunion during which they basically reconcile any longstanding differences. The drama around who’ll take home the tiara and whether two rivals can make up and be “best friends forever” is minimal; ultimately, every plot point is simply a way to set-up another song.

A jukebox musical set during the jukebox’s Golden Age, The Marvelous Wonderettes is an homage to vintage bubblegum pop with iconic earworms like “Mr. Sandman,” and “Respect,” novelty songs like “The Lollipop Song” and “Mr. Lee,” and chart-topping singles that had equally impressive second lives like Cher’s “The Shoop Shoop Song (It’s in His Kiss)” and Linda Ronstadt’s “Heatwave” in the decades which followed. Sometimes, it feels like American Idol in taffeta; other times, like a cabaret act in which the autobiographical banter has been swapped out for a comedy sketch. It’s not a bad trade, frankly, and for the record, American Idol’s Season 4 runner-up Diana DeGarmo was actually in the show for a stretch.

One warning though for potential ticket buyers: Don’t sit on the aisle or in the front row unless you’re willing to go onstage. There’s a little bit of audience participation for one game theatergoer who’ll be asked to join the quartet onstage not once but twice as a stand-in for a crush-worthy teacher. For the brave one who does get picked, this candy confection may be your chance to say “I actually once shared the stage once with INSERT ACTOR’S NAME HERE before she went on to headline INSERT BROADWAY TITLE HERE.” Visiting NYC for the weekend? This could be your best shot at a brush with tomorrow’s rich and famous.

Click here for more info on — or tickets to — The Marevelous Wonderettes , currently playing at the Kirk Theatre, 410 W. 42th St. in NYC.

0 comments on “The Marvelous Wonderettes: All They Have to Do Is Dream”