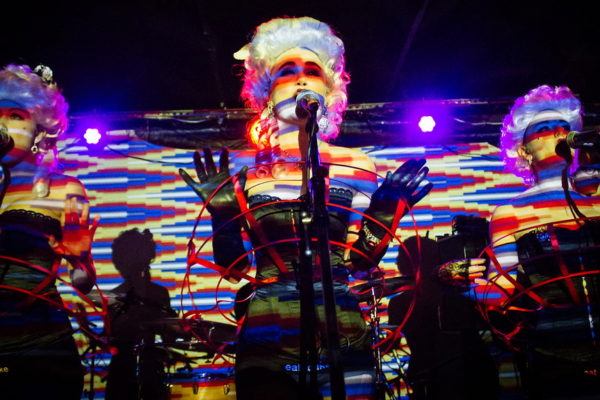 Way back in the days of Irving Berlin and George Gershwin, Cole Porter and Eubie Blake, Broadway melodies and pop tunes were not the strangers that they are today. Sure, there have been cast albums which have pushed their way into the mainstream since then (Hamilton, Hairspray… ), and the occasional ditty to chart on Billboard (“One Night in Bangkok,” “Let It Go”…) but with all due respect to The Book of Mormon, The School of Rock, and The 25th Annual Putnam County Spelling Bee, the Broadway discography of late is not exactly primed for FM radio.

And perhaps what needs to happen isn’t to turn rock stars into Tony-winning composers like Cyndi Lauper (Kinky Boots) and Duncan Sheik (Spring Awakening), but to reverse the formula. How would that work outside of the phenomenon that is Lin-Manuel Miranda? Well, one particularly entertaining experiment has manifested in Sky-Pony, a joyously irreverent pop group with a serious Broadway pedigree. Lead singer Lauren Worsham got a Drama Desk Award for A Gentleman’s Guide to Love and Murder while songwriter/keyboardist Kyle Jarrow is responsible for the very clever book of SpongeBob SquarePants: The Broadway Musical. (That they’re married simply means a better Lifetime movie if this band eventually hits it big.)

And rest easy:  there are no echoes of Ethel Merman at work here. For while Worsham has clearly crafted a highly theatrical, periodically-deranged stage persona as the band’s front-woman, she seems infinitely more likely to have found her inspiration in B-movie bad girls than this year’s nominees for the Outer Critics Circle Awards. When asked to name her favorite femme fatale, her choice is more contemporary than Sunset Boulevard’s Norma Desmond. “Nicole Kidman’s portrayal of Suzanne Stone in To Die For, hands down.” Channeling that particular sociopath works especially well when singing Sky-Pony lyrics like, “Everyone will end up with nothing and though I don’t know why that makes feel better” (“Everyone Will Die”).

Similarly, her cohort Jarrow isn’t citing Rodgers and Hammerstein as inspiration for the band. His influences are “Talking Heads, the Classic Motown sound, early Arcade Fire, and B-52s.” And those references don’t just play out in the sonics and wordplay either. At their shows, the band has a zany fashion sense that looks to be taking a page out of David Bowie and John Waters all at once. It should come as no surprise that Jarrow describes their theater piece The Wildness (2016) as “a concept album onstage.”

This overriding playfulness appeals not only to their fans but also to their Broadway cohorts: Bryce Pinkham (Holiday Inn), Jeff Kready (Les Miserables), Catherine Walker (Ragtime), Marc Kudsich (Hand to God), and Katrina Dideriksen (Hairspray) have all joined the band onstage and not just in the audience. Indeed, Caesar Samayoa (Come From Away) and Jonathan Raviv (The Band’s Visit) showed up at a recent concert at NYC’s Rockwood Music Hall and not only each took on a Sky-Pony song but did Worsham’s accompanying choreography as well.

Next up for Sky-Pony is actually something completely different: the band will be performing a selection of their tunes in accompaniment with a new piece by Nimbus Dance Works at the Brooklyn Academy of Music on Apr. 21 and 22. Choreographed by that company’s artistic director Samuel Pott, Esther will be a chance to hear Sky-Pony’s lyrics anew as lines such as “If you leave me, I’ll rip your face off” and “let’s disappear” are suddenly recontextualized by a tale from the Old Testament. We suspect God himself would approve.