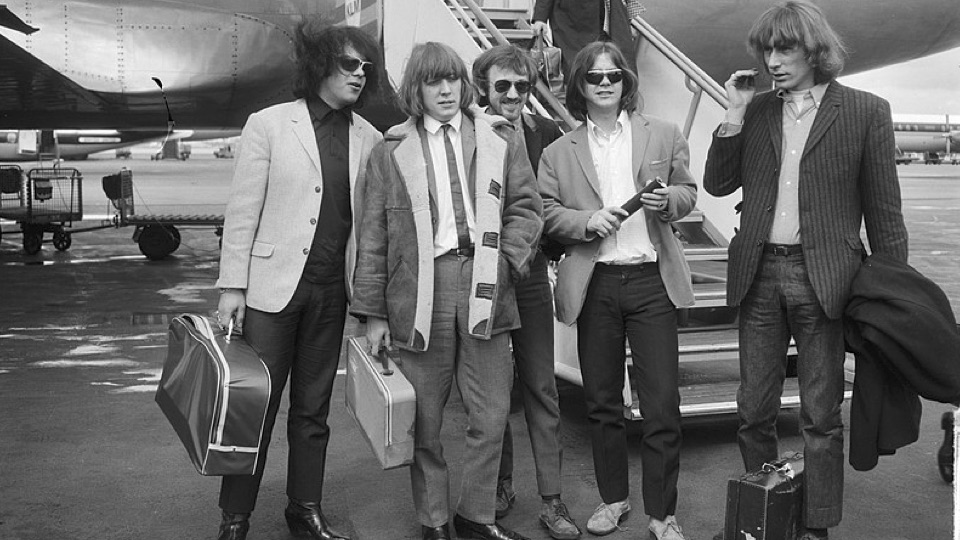 If accolades and anecdotes could be traded in for money, Phil May, lead singer of the Pretty Things who passed away in May 2020, would’ve died a multi-billionaire. David Bowie wrote “God!” beside his name in an old address book and covered two Pretty Things’ songs on his Pin-Ups album. Joey Ramone called the band “the biggest influence” on the Ramones and said they “invented garage bands.” Other super-fans included the Sex Pistols, Iggy Pop, and Nirvana.

The Pretty Things, whose lead guitarist, Dick Taylor, was in the first band Keith Richards and Mick Jagger ever played in, were also one of the first English bands that blew up their career before they were about to “blow up.” In 1965, the band was offered an American tour by promoter Sid Bernstein, who quite successfully introduced the Beatles to the States and hoped to do the same for them. But their manager felt the fee was too low and sent the lads to a slightly smaller market and country—New Zealand.

Related: “When The Beatles Moshed It Up with The Stones”

And so, it came to pass: Bad management, very bad behavior and bad press about their behavior wound up being the band’s commercial downfall.

David Gilmour of Pink Floyd summed up Mr. May and his fellow musical miscreants: “The Pretty Things made the Stones look tame.” Their “Midnight to Six Man” song, which Joe Strummer gave a shout out to by using the song’s title as the opening line in the Clash’s “(White Man) In Hammersmith,” neatly sums up their 1960’s lives as sloppy drunks.

This ditty was preceded by their ode to L.S.D., cleverly called “L.S.D.” And, in a laughable case of a pot calling a kettle black, Led Zeppelin manager Peter Grant considered them “unmanageable;” although they later became the first band to be signed onto Zeppelin’s Swan Song label. Mr. May admittedly was a “lightweight” in comparison to the “Things’” drummer, Viv Prince. Prince, whose daily diet back in the day featured large portions of drugs and drinks, was a major influence on none other than Who drummer Keith Moon. May explained: “Keith idolized Viv. Before Viv, playing drums was quite sedentary. And through Viv, you’d suddenly realize you could be a drummer and be an extrovert. Keith realized he could be Keith. He could still play drums and let out all his lunacy through the drum kit.”

But May and the rest of the band grew tired of Viv constantly missing recording session and his pranks which included setting fires on stage and carrying around a dead crayfish on a string, and fired him after only one year of service.

Three years later, Pretty Things released in 1968 what is considered the first rock opera/concept album, S.F. Sorrow beating the Who’s Tommy by seven months. Pete Townsend has denied the album influenced him although both pieces open with the birth of the story’s hero at the beginning of the 20th century. The album wasn’t released in America on Motown’s Rare Earth label until much after Tommy was out. The “Things” were then labeled “copyists” and the album was quickly relegated to stores’ cut out bins and later, cult status.

And the rest is rock ‘n’ roll history; a history that a contented May in later years was very happy to live with; noting: “I find bucket lists laughable. Nothing is gnawing at my soul. I’ve had an interesting life.”

It certainly was a life that had so many readable and raucous rock ‘n’ roll misadventures, it’s a shame Mr. May never wrote a memoir. A chapter would’ve been devoted to May’s close friend, the late Rolling Stone, Brian Jones; which could have led off with May recalling: “He lived with us at the notorious house in Chester Street. It was weird because Brian and Viv had this love/hate relationship. I liked Brian a lot, but he was his own worst enemy, very paranoid. One night Brian came back from a gig and we were playing 12 X 5 [the Stones’ second album] and really enjoying it; everybody’s really stoned and laughing. As Brian walked in, he thought we were taking the piss out of the record. For some reason, he had this ukulele, and he ran over and smashed it over Viv’s head. Of course, Viv didn’t really notice as he was semi-unconscious anyway.

“After that Brian melted down all our records and stuck them all over the house. He did have a tough time living at our house. When the Stones weren’t around he was very friendly, but I think he felt he had to maintain this strange stance around them and us.”

When asked what he would like to have written on his tombstone, May joked, “I’ve nothing planned. I might have pissed a lot of people off along the way but hopefully, I haven’t made too many real enemies. So its tone would depend upon who writes it.”