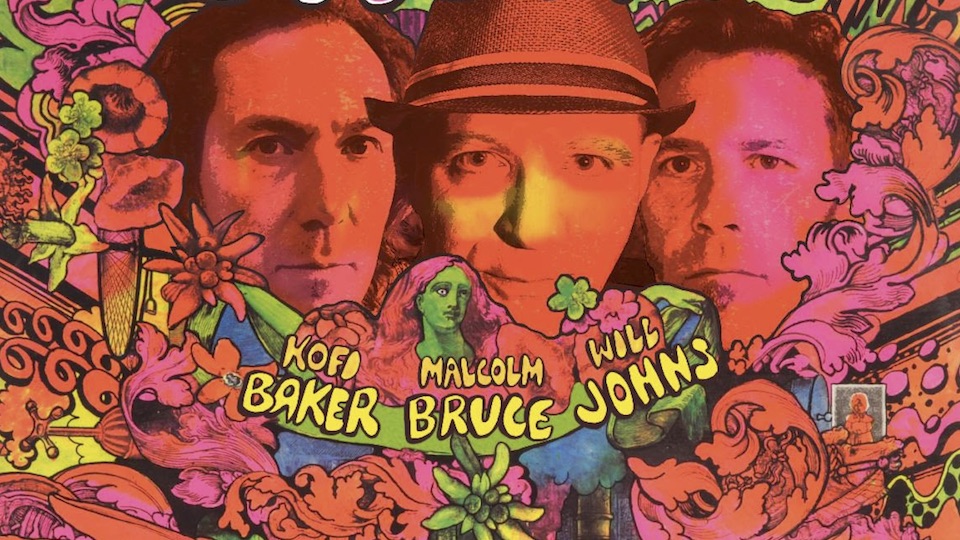 Cream is one of the most influential bands in rock history. Heavy metal, jam bands and southern rock have all been influenced by the famed power trio (check out Lynryd Skynrd’s “Crossroads,” from 1976’s One More From the Road). Yet, their time together was short-lived, forming in 1966 and disbanding in 1969. There were four albums of studio recordings, with the last two Wheels of Fire and Goodbye, Cream including live performances. Though well known for their explosive live performances like “Crossroads and “Toad,” their studio albums included a mix of their original songs, along with takes on blues standards. There was a brief reunion in 2005, with the trio playing a handful of shows in London and NYC but, to the disappointment of many fans, they did not play any other cities.

Now, Malcolm Bruce and Kofi Baker, the sons of Jack Bruce and Ginger Baker, have partnered with Will Johns, Eric Clapton’s nephew from his marriage to Patti Boyd, in forming the “Music of Cream.” The trio is touring extensively playing a generous mix of the band’s songs, highlighting Cream’s studio and live work. I saw them perform recently at the Arcada Theater 40 miles west of Chicago and any doubts about the band’s commitment or musicianship were quickly put to rest. They are creating a fresh take on Cream music while respecting its legacy.

The original Cream mixed Eric Clapton’s passionate blues playing while Bruce’s and Baker’s more experimental playing that added jazz elements with African rhythms, to the blues. It was a unique sound enhanced by Bruce’s singing and Clapton’s more traditional vocals. In the new group, Bruce and Johns trade vocals, both having a singing style similar to Jack Bruce, sticking close to the original trio’s chemistry. The show started with one of Cream’s enigmatically titled songs “N.S.U.,” one of many from Cream’s first album, Fresh Cream. The upbeat song is an excellent opener, grabbing the audience’s attention with its dynamic beat and soloing. Cream’s reputation for long improvised solos was partly inspired by the crowds they played to in San Francisco early in their career who were used to the lengthy jams of Haight Ashbury bands like the Grateful Dead and Quicksilver’s Messenger Service. They were happy to oblige, stunning the West Coast audiences with their improvisation skills.

The songs cover all of the group’s albums but they are not played chronologically, instead chosen wisely for dynamic pacing. “Outside Woman Blues,” “Politician,” as well as, “Badge” from 1969’s Goodbye Cream, all showed up early in the set. “Sleepy Time, Time” from Fresh Cream was introduced by Bruce, proudly mentioning that his mom wrote the lyrics. A powerful version of “Deserted Cities of the Heart” followed along with “SWALBR” with John’s introducing it in his mischievous manner, his stage presence in contrast to Clapton’s introspection.   The first set ended with the classic “White Room” from Wheels of Fire.

After a 15-minute break, the band returned. While the first set was quite satisfying, the second set is where they really shone, playing with an intensity and ferocity rivaling their fathers. They started with a rousing version of “I’m So Glad” and followed it with several other blues tracks including “Crossroads” with Johns sharing how his Uncle Eric showed him how to play the basic riff in the 80s but left the teen to learn the rest of it on his own. Johns proceeded to play a near note-perfect of the Robert Johnson classic. A passionate version of “Sitting on Top of the World” followed with Bruce channeling his father’s impassioned vocals. Next, it was Kofi’s turn for the spotlight, briefly sharing some stories of his tumultuous relationship with his eccentric father and then playing, “Toad,” his father’s signature song, featuring a 10 minute plus drum solo.

“World Gone Wrong” followed, a song Jack Bruce wrote reflecting on his troubles with Malcolm’s mom. It was a stunning version with Malcolm’s stirring vocals and hypnotic rhythm creating a crescendo that was one of the show’s highlights. They closed the show with the classic “Sunshine of Your Love” that begins with one of rock’s all-time great riffs.   They encored with “Spoonful” staying a little closer to the studio version from the British version of Fresh Cream than the live take from Wheels of Fire.

The “Music of Cream” plays with an impressive technique and vibrancy that, along with their unique lineage, makes for an excellent way to experience Cream’s music.

Image of Music of Cream from Wikimedia Commons

0 comments on “The Music of Cream Carries On”