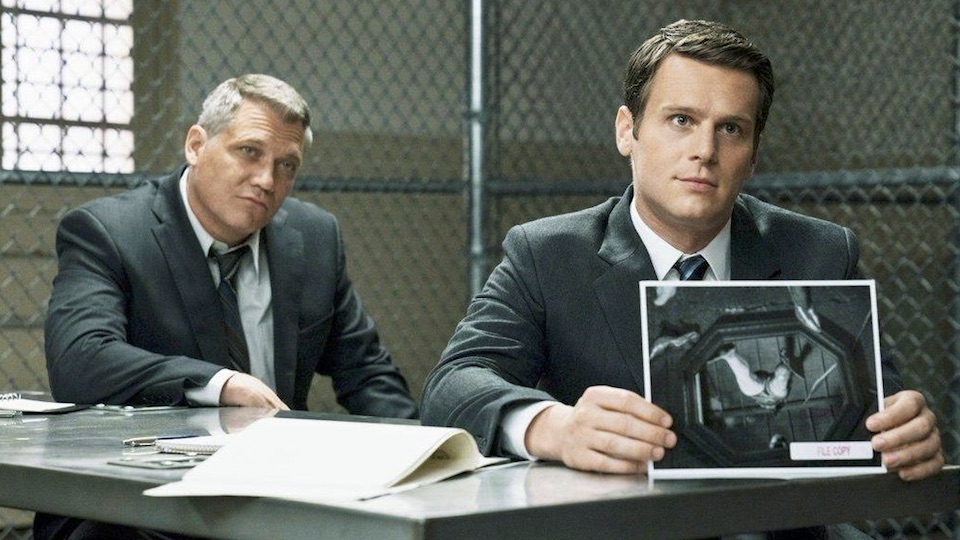 Mindhunter is Netflix’s award-winning drama created by Joe Penhall based on the book Mindhunter: Inside the FBI’s Elite Serial Crime Unit by John Douglas and Mark Olshaker. It just ended its second season. The series (like the book) is set in the 1970s and depicts the beginning of the FBI’s famously accurate serial killer profiling process. If you need a little catch-up before diving into Season 2, here ya go…

At the end of Season 1, nascent FBI profiler Holden Ford (Jonathan Groff) had just collapsed in the hallway from a panic attack after notorious serial killer Edmund Kemper suggested that he could kill him … if he wanted to. His partner Bill Tench’s (Holt McCallany) relationship with his wife Nancy (Stacey Roca) continued to degrade mainly due to his inability to understand how to communicate with his autistic son – and his embarrassment as a father as a result. When his son discovers and hides a graphic murder photo, the couple wonders what impact this has had on their child.  After Holden continues to fixate on his line of work and not on his relationship with his live-in girlfriend Debbie (Hannah Gross), she packs up and leaves. And researcher/partner Wendy Carr (Anna Torv) returns to Georgia to personally handle a case herself. In short, there’s a bit of chaos across all of the major characters and relationships. And while the two lead FBI agents have managed to use their new scientific techniques to elicit a confession from child murderer Darrell Gene Devier, there’s no question that the process has taken a toll on everyone involved.

In Season 2 of Mindhunter, David Fincher continues with this theme of the psychological impact of their profession on the characters — but mixes in some interesting commentary on profiling and even racism. Up until Season 2, Holden and Bill did not discuss their line of work with anyone except their closest partners at the FBI.  Up until the end of Season 1, Bill’s wife Nancy didn’t grasp the disturbing extent of the crimes being investigated and the effect it had on otherwise stoic Bill. But now Holden continues to quietly struggle with his feelings. And while he previously showed interest in closeted lesbian Wendy Carr (Anna Torv), the dynamics of their relationship take a solid detour. As friends and neighbors begin to understand Bill’s line of work, he seems to revel in the attention and notoriety, though struggles with the idea that he’s becoming famous due to the fascination generated by the criminals he’s profiling. It’s definitely a prelude to the movie-star admiration given to such monsters in movies like The Silence of the Lambs, No Country for Old Men and Natural Born Killers.

Of course, what also makes the series entertaining are the eerily realistic portrayals of well-known serial killers that appear throughout. In this latest season, we are “treated” to interviews with Charles Manson (Damon Herriman, Justified), more glimpses of the BTK Killer Dennis Rader (Sony Valicenti, The Post) and Son of Sam killer David Berkowitz (Oliver Cooper, Californication). The actors not only look like their real-life counterparts, they also sound like them (a great deal of the dialogue is based on actual recorded interviews and interrogations). It makes you uncomfortable.

In Season 2, there’s a prescient treatment of the investigation into the Atlanta child murders that occurred in late 1979 and early 1980s. Given that Atlanta (even at that time) had a large black population, and that the police force was predominately white, the series provides the juxtaposition that some of the police offers sworn to protect and serve also belonged to the KKK. The idea that Holden’s investigation and techniques suggest that the killer is likely black, and his blind faith devotion to that theory doesn’t sit well with a community that already suspects that the police would love to pin the whole thing on a black killer.  The sequence used to drive this point home is both haunting and jarring.

Season 2 has a new writing team and three notable directors in David Fincher (“Mindhunter”, of course, also Seven and Panic Room), Carl Franklin (Devil in a Blue Dress), and Andrew Dominik (The Assassination of Jesse James by the Coward Robert Ford). It’s difficult to upstage a successful first season without being repetitive, and generally, the writers succeed. It was nearly a full two-years between Season 1 and Season 2; Season 3 is reported to be “on hold.” Beyond the interesting analysis of what drives killers, Mindhunter has moved into a deep discussion of how  “normal” people handle being confronted with such outrageous behavior. Further, the impact on the investigators in this brutal line of work makes an entertaining and insightful study on how we often are harder on ourselves than the perpetrators. Definitely worth a binge-watch (just not alone).

0 comments on ““Mindhunter” – A New Season of Serial Killers”