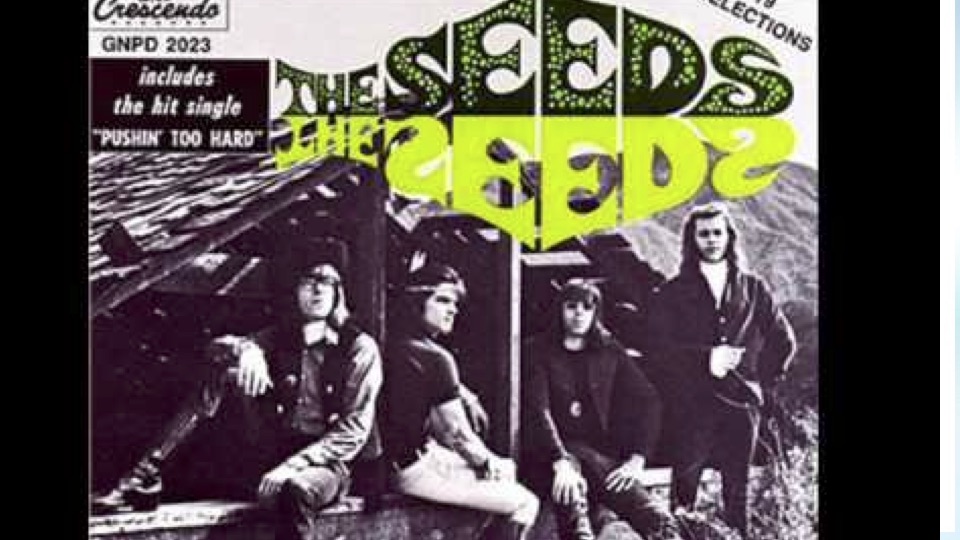 “Pushin’ Too Hard” by The Seeds is drenched in attitude from the very start. The reverberating, almost sinister keyboards of Daryl Hooper back up lead singer Sky Saxon’s raw vocals, while the rest of the band helps fill out the ragged sound of this now iconic tune. The song helped inspire countless garage bands and is often cited as a proto-punk anthem. The Seeds came together in California in 1965, when Saxon (who had earlier recorded several singles under the name Richie Marsh) met up with Hooper, guitarists Jan Savage and Jeremy Levine, as well as drummer Rick Andridge. The band started playing gigs in the Los Angeles area and gained a reputation for their raucous, high-powered live shows. Levine left the group shortly after their formation, and the band continued on as a quartet, with Saxon handling most of the songwriting.

After being signed to GNP Crescendo Records, the band began recording and eventually released their first single “Can’t Seem To Make You Mine,” which received significant airplay in California, but wasn’t a national hit until it was re-released in 1967. Their second single, “(You’re) Pushin’ Too Hard,” also didn’t find much success upon its initial release in late 1965. The group’s first album, the self-titled The Seeds, was released in April of 1966. With a slightly shortened title “Pushin’ Too Hard” was then re-issued in November of 1966. The song started gaining traction on the charts, eventually reaching number 36 on the Billboard Hot 100 in February of 1967. Daryl Hooper’s electric piano work and Jan Savage’s guitar solo, along with Sky Saxon’s anguished vocal, helped power the record, which has been variously interpreted as a “back off’ message to a possessive lover, and an anti-establishment rant.

The group performed “Pushin’ Too Hard” on several television shows, including a 1968 episode of the short-lived Eve Arden and Kaye Ballard series, The Mothers-in-Law. The group appeared as the fictional rock band, The Warts, in a story entitled “How Not To Manage A Rock Band.” That’s right, ultra-cool garage rockers The Seeds appeared on a television sitcom! Subsequent albums by the band included 1966’s A Web of Sound, which included the single “Mr. Farmer” and 1967’s Future, a disc which combined the group’s rough-hewn sound with the psychedelic style then in vogue in the wake of The Beatles Sgt. Pepper. The album’s lone single “A Thousand Shadows,” much like “Mr. Farmer” reached the lower rung of the charts, but didn’t find the success of “Pushin’ Too Hard.” The band’s final album with the original lineup, Raw & Alive, The Seeds in Concert At Merlin’s Music Box, was released in 1968.

“Pushin’ Too Hard” gained new life when it was featured on the garage rock compilation Nuggets: Original Artyfacts From The First Psychedelic Era 1965-1968, which was put together by Lenny Kaye. That seminal album was originally released on Elektra Records in 1972. The Seeds have been cited as a primary influence by many punk rockers, including The Ramones and Iggy Pop. Sky Saxon continued to record and perform in the ensuing decades. He re-formed The Seeds at various times over the years, sometimes with other original members, until his death in 2009. “Pushin’ Too Hard” has been covered by a number of bands, including Pere Ubu, The Rubinoos, and The Bangles, who performed the song as part of their 2007 concert video Return To Bangleonia. A comprehensive documentary on the band entitled The Seeds: Pushin’ Too Hard, was released in 2014.

3 comments on “The One-Hit-Wonder File: “Pushin’ Too Hard””