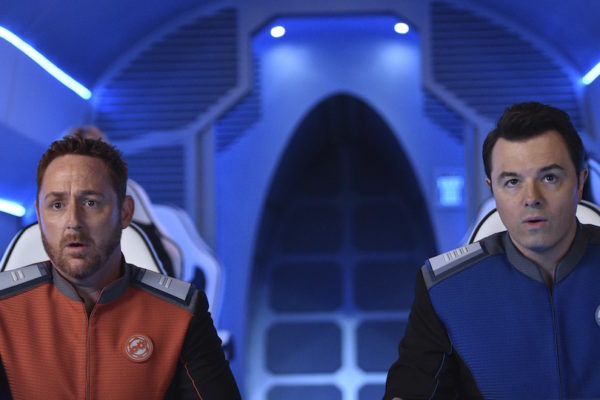 Star Trek is a huge part of our pop culture landscape, so it’s no surprise that a pair of new TV series are heavily influenced by Gene Roddenberry’s groundbreaking space saga. Both FOX’s The Orville and the CBS All Access prequel Star Trek: Discovery pay homage to Trek’s long history. Where the two shows diverge is that one honors the positive spirit of the original series, while the other forges some darker paths in that now familiar universe. While diehard Trek devotees have been vigorously debating the two shows, each has its merits.

The Orville
Seth MacFarlane is best known for the off-color humor he’s brought to shows like Family Guy and American Dad, and movies like Ted and A Million Ways to Die in the West. The Orville is something else altogether: a loving valentine to classic Star Trek, with a dash of The Next Generation thrown in for good measure. Not only did MacFarlane create the series, he stars as Ed Mercer, the captain of the title starship, a Planetary Union vessel exploring the universe in the 25th century. Along for the ride are Mercer’s ex-wife Kelly Grayson (Adrienne Palicki) who serves as the ship’s first officer, his best friend Gordon Mallow (Scott Grimes) the ship’s helmsman, and a chief medical officer named Dr. Claire Finn (played by Deep Space Nine alumna Penny Johnson Jerald). There are several alien crewmembers, including Bortus (Peter Macon), a member of a single-gender species known as the Moclans, and Alara Kitan (Halston Sage), the ship’s tough-as-nails Xelayan security officer. Guest stars so far have included Liam Neeson, Rob Lowe, and Charlize Theron who as Pria, a saavy con woman, entranced Captain Mercer in one of the most entertaining episodes aired thus far.

While there are certainly flashes of MacFarlane’s trademark lowbrow humor, the show succeeds as both a tribute and an enjoyable science-fiction outing in its own right. MacFarlane is a longtime Trekkie who’s populated the behind-the-scenes crew with series veterans such as writers-producers Brannon Braga and Andre Bormanis, from The Next Generation and former cast members Jonathan Frakes (Will Riker on The Next Generation) and Robert Duncan McNeill (Tom Paris on Voyager) who have been brought on to direct episodes, which tend to focus on Roddenberry’s optimistic view of the future.

Star Trek: Discovery
For those looking to take a trip to a different part of the Roddenberry universe, Star Trek: Discovery is available on the CBS All Access video service. The series takes place between the end of Star Trek: Enterpriseand the beginning of The Original Series. Sonequa Martin-Green heads up the cast as Michael Burnham, the first officer of the USS Shenzhou, who incites a full-scale war by ordering her ship to fire on a Klingon vessel during a tense confrontation. Burnham is court-martialed and kicked out of Starfleet, then picked up on her way to prison by Captain Gabriel Lorca (Jason Isaacs), the captain of the USS Discovery. Lorca’s ship is equipped with state-of-the-art technology and weapons. The Discovery is tasked with completing missions that fall into that gray area between doing the right thing, and doing what’s necessary to win a war. Lorca feels Burnham will be useful to him in situations where tough choices need to be made.

Creators Bryan Fuller and Alex Kurtzman clearly wanted to explore the darker side of the Star Trek universe, making Discovery perhaps the riskiest Trek outing since Deep Space Nine (which also featured a wartime setting in its later seasons). Discovery offers a wider focus than previous entries in the franchise by giving viewers the perspectives of other personnel beyond the bridge crew, like Burnham’s roommate Sylvia Tilly (Mary Wiseman) who works in engineering, and security chief Ash Tyler (Shazad Latif), a former POW who was tortured by the Klingons. Some familiar characters are also featured — Spock’s father Ambassador Sarek (James Frain) and con man Harry Mudd (Rainn Wilson) among them.

This show’s big-screen quality special effects and production values are some of the best in the Trek galaxy. It’ll be interesting to see where the show goes from here; it’s definitely not your dad’s version of Star Trek, but it’s an intriguing addition to the canon. The great news for fans is that both series have been renewed, so whatever flavor of “live long and prosper” television you choose, you’ll be able to watch it well into the near future.

Photo: Image of The Orville courtesy of Fox.

0 comments on “The Next Next Generations: The Orville and Star Trek: Discovery”