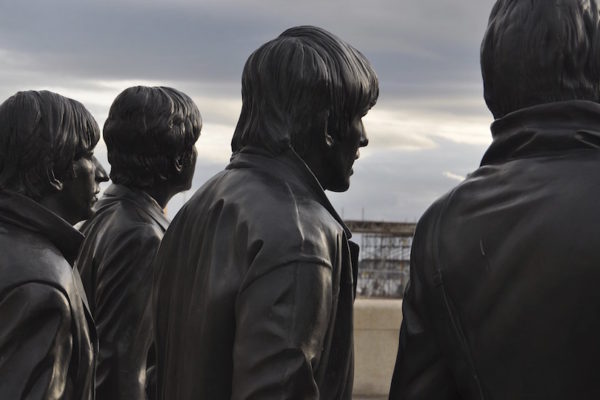 There are Beatles fans everywhere, so it makes total sense that there would be monuments to them all over the world, and that fans would make pilgrimages there. (Please note: You can’t be just a “day tripper” if you want to see them all.) Assuming that you’re already aware of the Strawberry Fields memorial with its “Imagine” mosaic in Central Park — which is really a John Lennon tribute, not a Beatles tribute — here are five artful representations of the Fab Four that are worth a look, should you be in the area. (We’ve omitted the Abbey Road tribute at that McDonald’s in Chicago since we heard that Paul McCartney was not a fan.) Okay, people: come together.

If you happen to be in Kazakhstan, you will not be the fool on the hill for wanting to take in the tranquil allure of this sculpture in Kok-Tobe park. The bronze group of statues captures the young mop-topped foursome in their original Please, Please Me look as Paul, George and Ringo surround John who’s sitting on a bench holding a guitar. The memorial is the brainchild of Almaty-native Rinat Shayakhmetov who witnessed a Lennon 60th birthday celebration in NYC and was inspired by the emotion of fellow fans to get a Beatles tribute built in his hometown. Supported by local journalist Arsen Bayanov, he secured permission from Apple Corp. then enlisted the talents of Eduard Karyan, the Kazkhstani sculptor who won the honor of designing the work.

Decades before the Berlin Wall came down, the seeds of dissent were being sown by The Beatles (“You say you want a revolution?”) whose music was taken to heart by Soviet youth. Paul McCartney may not have had “Georgia” on his mind when writing “Back in the USSR,” but he’s the lyricist of honor here as his words from “The End” accompany the outlined figures of The Fab Four on the brick wall: “The love you make is equal to the love you take.” The monument, situated along the banks of the Iset river, was conceived in 2003 by Valdamir Popov, the President of the Beatles Fan Club of the Urals, and officially opened to the public in 2009.

The Beatles at the Ridge (Walnut Ridge, Arkansas)

Take a drive down Highway 67 (a.k.a. Rock ‘n’ Roll Highway) to find one of the coolest tributes to the Beatles in the USA. Inspired by a footnote in Beatles history, this artwork commemorates a 1964 stopover by the band in Walnut Ridge which became the stuff of local legend. Lawrence County Chamber of Commerce commemorated this brief Beatles appearance by commissioning artist Danny West to create these Abbey Road cutouts in front of a large aluminum backdrop that changes throughout the day. The surrounding area, aptly named Beatles Park, now hosts an annual Beatles festival, so be sure to time your visit to get the full experience.

The Beatles in Cement (Houston, Texas)

Everything’s bigger in the Lone Star State, including these statues of John, Paul, George, and Ringo, which stand 36 feet high and are located in the backyard of 8th Wonder Brewery. Sculptor David Adickes’ art can be seen throughout Houston (including giant representations of U.S. Presidents and Texas statesmen) but his monument to The Beatles is something grander, capturing the look and vibe of the group from their Sgt. Pepper phase. Money can’t but you love, but it can buy you one of these Beatles statues — if you have $350,000 or so to spare.

The Beatles in Bronze (Liverpool, England)

If you’re only going to visit one Beatles monument before you’re 64, then you need to get yourself out to Liverpool where Chris Butler, Managing Director of Castle Fine Art Foundry LTD, came up with the idea for the statue.  At the time of its unveiling in 2015, he noted that it needed no plaque or introduction: “It’s a monument to a moment, and that moment started in Liverpool.” Sculpted by Andrew Edwards, the landmark is a 3-D recreation of a 1963 photo shoot and show the Fab Four as if they’re simply strolling to a gig. Edwards genius here is his ability to bring to life the four’s youthful curiosity and energy, at the cusp of greatness, before their musical gifts would change the world.

PS.  Do a deep-dive into some of your favorite Beatle albums.  You’ll dig it  (and not for nothing, it makes a great gift for the Beatle-geek in your life).

0 comments on “A Travel Guide for The Beatles Fan”