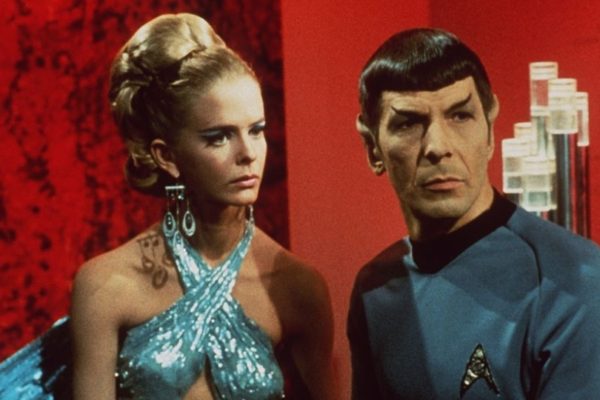 Since its introduction into American homes in the 1950s, television has been cheered and jeered alike for its ability to influence the masses and shape our culture (and, according to some of our mothers, rot our brains). As the cooler, younger sibling of film, TV is always changing with the times, introducing us to new characters and instantly quotable catchphrases that have stayed with us over the years. Narrowing down our “dy-no-miiiite” favorites to just ten was pretty tricky, and you may think like Lucy we’ve “got some ‘splainin’ to do” about our choices, but “aaaaaaaay,” with so many great shows to choose from, “that’s the way it is.” So here’s how the list shaped up (we “love it when a plan comes together”).

10. “How YOU doin’?” (Friends)
While Joey Tribbiani may have been the Central Perk gang’s resident struggling actor, he never struggled with the ladies. He used his favorite pickup line — “How YOU doin’” — frequently throughout the show’s ten seasons, bedding a bevy of beautiful women, although frankly, he always seemed to love food more. What was less expected was that this catchphrase would go on to be used repeatedly by talk show host Wendy Williams!

9. “Marcia, Marcia, Marcia!” (The Brady Bunch)
Poor Jan! She could never match her pretty, popular older sister. Jan’s signature whine, “Marcia, Marcia, Marcia,” has been parodied by Saturday Night Live, in commercials for Snickers featuring Steve Buscemi, and even in the cult movie spin-off of the show. More recently, the phrase popped up as an episode title for The People vs. O.J. Simpson, which focused largely on that case’s real-life district attorney Marcia Clark.

[amazon template=right aligned image&asin=B01936Q064]8. “Winter is coming.” (Game of Thrones)
As internet memes go, the House of Stark’s ominous motto “Winter is coming” still has legs. But it’s also been spoofed on Late Night With Seth Meyers, Saturday Night Live, and even spawned an unofficial Game of Thrones parody musical called Winter is Coming. On the actual HBO series, snow finally began to fall last season. Could this mean the malevolent White Walkers are returning to Westeros? Is a new catchy tagline ahead?

6. “What you talkin’ bout Willis?” (Diff’rent Strokes)
Precocious Arnold Jackson (Gary Coleman) scrunched up his face and asked his older brother Willis (Todd Bridges) this question any time he was befuddled. Turns out, he was befuddled a lot over eight seasons as the line evolved to be his signature catchphrase. The expression has popped up everywhere over the last 40 years from Gilmore Girls to Family Guy to The Office. No word on whether Arnold ever found out what, exactly, Willis was talking about.

5. “That’s what she said.” (The Office)
Michael Scott’s favorite lame joke retort (perfectly delivered by Steve Carrell) to his Dunder Mifflin employees turned any seemingly innocent phrase into a giggle-worthy (or groan-worthy) double entendre. Though it’s an Americanized version of a very old British joke involving an actress and a bishop, The Office re-popularized it for new audiences stateside. Who knew something so old could be so satisfying? (That’s what she said.)

[amazon template=right aligned image&asin=B00EIJTLK4]4. “Yada yada yada” (Seinfeld)
The ‘90s groundbreaker provided plenty of memorable lines (“No soup for you!” and “Hello Newman”) but the “yada yada yada” bit from Season 8 is likely the show at its best. After George’s girlfriend tells a story about her ex visiting the night before and says, “and yada yada yada I’m really tired today,” the neurotic foursome debates whether “yada yada yada” means sex or cut to the chase. The Paley Center for Television ranked “yada yada yada” number one of “TV’s 50 Funniest Phrases.”

3. “D’oh!” (The Simpsons)
TV has had no shortage of bumbling fathers, but Homer Simpson ranks pretty high on the list of dopey dads who mean well but can’t quite get it together. His signature exclamation usually happens when he does something stupid, gets injured, or right before something bad happens. “D’oh” has become so embedded in our culture, New Oxford Dictionary of English added it in 1998. Maybe Homer isn’t so stupid, after all.

2. “Live long and prosper.” (Star Trek)
Spock’s traditional Vulcan greeting (complete with alien hand gesture) is one of the most widely recognized phrases worldwide. Actor Leonard Nimoy based the greeting on an Orthodox Jewish blessing he saw as a child, so it turns out aliens, humans, and Starship Enterprise crewmen alike have been blessing one another for the last 50 years! To quote our pointy-eared science officer, “Fascinating!”

1. “Heeeeere’s Johnny!” (The Tonight Show Starring Johnny Carson)
Thanks to Ed McMahon’s signature drawn-out delivery during his 30-year tenure as Carson’s sidekick, the line “Heeeeeere’s Johnny” has been referenced everywhere from a Weird Al Yankovic song also titled “Here’s Johnny” to the infamous door scene in The Shining. Though you can debate who said it better (McMahon or Jack Nicholson), this one has lost none of its power over the years.

PS. You may also enjoy our other television-related lists: 10 Unforgettable TV Theme Songs and The Top 10 TV Shows of the ’80s.