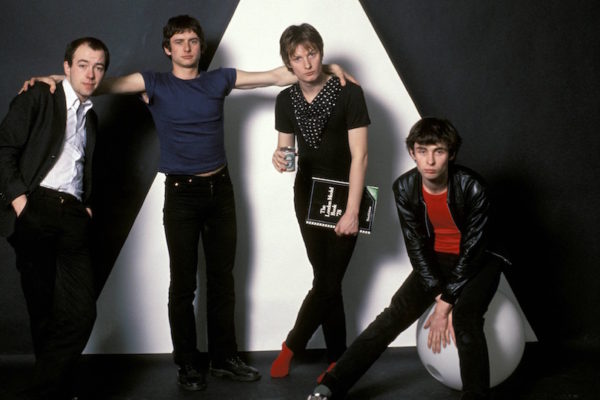 In 1986, I heard the song “Earn Enough for Us” on WLIR and felt immediately connected with the band XTC, the New Wave pop trio from Swindon, England that I now consider one of my top three artists of all time — next to Joe Jackson and Steely Dan. Here’s a list counting down my Top 10 favorite XTC songs. And while it was a challenge to pick those ten songs, it also proved to be a fun reminder as to why I fell in love with XTC in the first place.

10. “Respectable Street” (1980)
From XTC’s first fully consistent album Black Sea comes this straight-ahead rocker featuring Partridge channeling his inner Ray Davies, as he details the hypocrisy of neighborhood life by contrasting the facades people wear with who they really are. Ironically, the single was banned from the BBC because of the words “abortion,” “contraception,” “sex position,” and “retching.” Sony’s insistence that the band re-record a tamed down version as a 45 only emphasized the point being made.

9. “Seagulls Screaming Kiss Her Kiss Her” (1984)
So many of the songs on The Big Express would have benefited from subtler production, but this track works. Written about a conflicted relationship, this song displays the inner fears of acting on feelings and the paranoia of everyone already knowing the obvious. Two fun facts: It features a euphonium solo, and in 1992 a Japanese rock band named themselves after this song.

8. “No Thugs in Our House” (1982)
XTC pushed everything as far as it could go on their fifth album English Settlement. In truth, they pushed so hard that Terry Chambers would leave the band soon after. Yet his rhythms were the anchor to their sound and the band could never truly replace him. On Partridges’s tune about clueless WASP parents raising a potentially racist child who gets drunk and beats up Asian kids, the rhythmic importance is most evident, as Chambers pushes the beat forward bashing the drums so hard, you feel like you’ve been through the wringer as well.

See Related Article: “A Prediction: ‘This Is Pop’ Will Pull In New Fans for XTC”

7. “This Is Pop?” (1978)
Even though XTC was billed as a punk band, you could see right through the hiccupped vocals, jerky rhythms, and dissident keyboards that this was a band capable of writing great pop hooks. Virgin Records must have heard it too and had them rerecord this track from their debut White Music which lays out the sonic blueprint to their career.

6. “The World Is Full of Angry Young Men” (1990)
The addition of Dave Gregory in 1979 expanded XTC’s musical horizons. The band started to add jazzier elements to their songs, like this Moulding-penned tune recorded during the Mummer sessions and eventually released as a B-side to “The Loving” in 1989. I first heard it a year later on the Rag & Bone Buffet compilation. The vibe has always stuck with me as well as the message that life isn’t about being less angry but in learning the emotional intelligence to understand your anger.

5. “Jump” (1983)
After Chambers’ departure from the band and Partridge’s nervous breakdown, XTC’s sound changed dramatically as the latter began to write mellower acoustic material for the next album Mummer. My two favorite songs of this period, “Toys” and “Jump,” were left off the original LP but added on the CD reissue. The “jump” of the title refers to the leap into love (and swimming pools) and features an unusual vocal ad lib on the outro of 59th St Bridge Song & Pick A Bale Of Cotton.

4. “King For A Day” (1989)
Colin Moulding is a damn fine songwriter. He wrote XTC’s first three UK hits then ended up the band’s George Harrison as Partridge assumed both the Lennon and McCartney roles. Even so, Colin’s songs were always album standouts — no more so than on their ninth album Oranges & Lemons. Getting to watch this shoulda-been Top 40 hit on David Letterman in the Summer of 1989 was cool; hearing this randomly in a supermarket every so often is a private thrill.

3. “Easter Theatre” (1999)
Partridge’s rep as a pastoral songwriter is taken to the next level as he turns his musical “painting” into a stage play. With a chorus reminiscent of the Beatles’ “She’s Leaving Home,” the frontman buoyantly tells the story of love requited and reborn. This one still makes the hairs on my arms rise.

2. “That’s Really Super, Supergirl” (1986)
The album Skylarking was XTC’s first time recording outside of England. Settling in Woodstock at Utopia Sound Studios, producer Todd Rundgren reined in the indulgences and ripened their songs to their fullest potential. With one of Dave Gregory’s best guitar solos, Andy Partridge’s lyrics bring forth the lead man’s comic book influences in the sardonic metaphor of Supergirl while he sings the role of a cuckolded man. One of XTC’s best pop songs.

1. “Rook” (1992)
Never has the sound of impending death sounded so beautiful. With orchestral and brass arrangements by Dave Gregory, “Rook” begins with stark ominous piano chords as Andy’s melody floats above like hovering spirits showing the depths of Andy’s songwriting and how far it had matured since White Music.