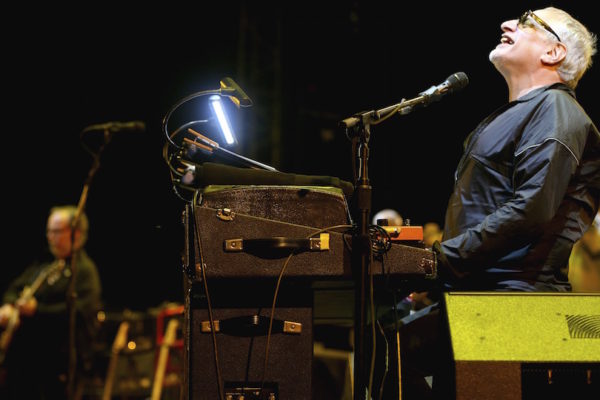 Although casual listeners may classify Steely Dan as a jazz-rock band, the group’s music demonstrates myriad musical influences well beyond those two genres. With that in mind, I’ve decided to create this top ten list with a twist. I’m choosing one song from each of their nine albums then throwing in a bonus track. While some songs will be familiar to many, others are deeper album cuts likely known only to hardcore fans. And of course, I reserve the right [amazon template=right aligned image&asin=B000002ORE]to change my mind about any of my selections; perhaps your responses will impact that.

1. “Fire in the Hole,” Can’t Buy a Thrill (1972)
Fagen’s piano is the star of this track. You can really hear him groove here with a mix of Thelonious Monk-like playing alternating with cascading, flowery choices on the bridges. Jeff ‘Skunk” Baxter’s pedal steel work provides a pad-like quality behind Fagen’s strident keyboards while his closing solo showcases how important that instrument was to Steely Dan’s early sound.

2. “The Boston Rag,” Countdown to Ecstasy (1973)
The chorus of this was primarily written by Fagen, with Becker composing most of the verses. The song’s intro is unique in that it is played over a series of intricate chord changes that are never heard again in the song, a Tin Pan Alley tradition not used frequently in the ’70s. Baxter again steals the show with a stinging guitar solo. The section begins quietly with piano and hi-hat then Baxter adds a vibrato-laden melody indebted to delay and volume manipulation. After twelve bars of this mysterious vibe, drum and bass kick in, and Baxter begins to let loose over the same chord progression. Twelve bars later all hell breaks loose as the acoustic guitar re-enters and the band preps for outro choruses.

3. “Night by Night,” Pretzel Logic (1974)
This is arguably one of the funkiest songs they ever recorded, with Becker and guitarist Dean Parks laying down a unified line over Jeff Porcaro’s syncopated drum groove and future Toto bandmate David Paich’s clavinet. Baxter steps into the spotlight for some distorted rhythm guitar before ripping into yet another fantastic solo. He returns for a second solo after the last chorus that builds to a frenzied fade out. The vocals on this tale of despair are delivered by Fagen with one exception: whenever the titular chorus is sung. On the outro, those vocal harmonies become especially dissonant, creating an apocalyptic mood behind Baxter’s frantic and furious guitar playing.

4. “Your Gold Teeth II,” Katy Lied (1975)
Many use the term “jazz” when describing Steely Dan, yet this so-called sequel is arguably the most “ jazz-like” they ever got. After a synthesizer-laden, vibraphone-heavy start, the groove settles in with a swinging waltz anchored by Jeff Porcaro’s tasteful drumming. The highlight of the song, however, is Denny Dias on guitar. His prowess is on full display with bebop licks that flow effortlessly even while revealing an intensity that is hard to match.

5. “Kid Charlemagne,” The Royal Scam (1976)
Hard to believe but the rhythm section of Bernard Purdie, Chuck Rainey, Larry Carlton, Don Grolnick, and Paul Griffin recorded “King Charlemagne” in one take. The Fender Rhodes electric piano, clavinet, and rhythm guitar dance around each while the drums and bass lay down a solid support. Although Larry Carlton’s famous guitar solo was a composite of only two takes, he had already spent close to two hours playing solos that they didn’t keep.

8. “Jack of Speed,” Two Against Nature (2000)
Here’s an unfinished reggae-ish song Becker and Fagen found on a 20-year-old cassette. When they played it on their 1996 Art Crimes tour, Becker took lead vocals. For the recorded version, Fagen sings the (altered) lyrics about characters flirting with madness then slows the whole enterprise down. A sublime hip-hop groove from Maze drummer Michael White locks in perfectly with Becker’s bubbling bass line. Fagen lays down a groovy Wurlitzer electric piano as Becker plays bluesy guitar licks that flirt with the vocals, horn section, and Fagen’s melodica.

9. “Godwhacker,” Everything Must Go (2003)
The subject matter of “Godwhacker” is at odds with its vibe but that’s nothing new for Steely Dan. The pocket is flawlessly executed by drummer Keith Carlock while three guitarists create a musical tapestry with Jon Herington laying down the devious-sounding guitar line as Hugh McCracken adds some chordal elements and Becker plays sneaky lead lines on top. Jazz pianist Bill Charlap provides the Fender Rhodes electric piano alongside Fagen’s Wurlitzer electric piano to great effect. Fagen takes the first solo, playing a synth harmonica patch, followed by Becker on guitar, marking the first time they both take solos on a Dan record!

10. “Snowbound,”Kamakiriad (1993)
This song is actually the only Becker-Fagen composition to be released on any of their solo albums. Written in 1985 but released much later, the song clocks in at over seven minutes — the second-longest tune on the album — and features Paul Griffin on Hammond B3 organ. The laid-back soul groove bounces along with a fabulous horn arrangement by Fagen and smooth background vocals supplied by the keyboard player as well. It’s more than worth a listen.

PS. We deconstruct the incredible song, “Aja.”   Plus, our jazz-fusion challenge!

7 comments on “10 Favorite Steely Dan Songs (With a Twist)”