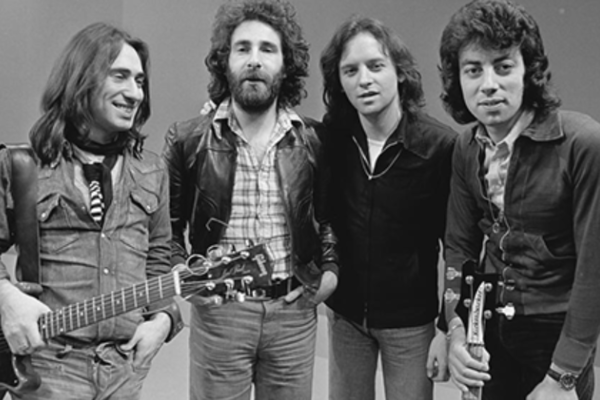 “Highbrow” and “lowbrow” are terms that seem increasingly fuzzy to me lately. But if we choose the right examples, the division is still there. Grand opera vs. Disney pop. The latest Werner Herzog film vs. Bewitched. Lucian Freud vs. the design on my cereal box. Since about the 1960s, there have been more and more cultural products that seem to defy easy sorting. Sgt. Pepper. The Sopranos. Sense8. Are they “middlebrow,” or are they new forms of high art?

But where does high art come from? The “auteur” theory emphasizes the lone creator, the genius who breaks new ground and bravely forges new paradigms. Brian Eno might disagree, if his writing on “scenius” is any indication. The term refers to the idea that great work emerges from an environment, not from one person.

Academics like the late Sol Worth, who gave movie cameras to Navajos in the ’60s to find out how their work might differ from that of other beginners, have contributed to a different way of looking at all of this. He and his team found that many of the “visual gestures” we take for granted in film – indications of the passage of time; telescoping of events to allow for brevity and pacing; even the sense of point of view – were simply ignored by Navajo filmmakers.

But where did the vocabulary of visual gesture we apparently take for granted arise? The short answer: trash. The silents and the early talkies were considered quite definitely lowbrow entertainment. The same holds true for ’60s sitcoms and procedurals. No one will argue that My Favorite Martian is high art. But those shows built up the toolkit for the auteurs of today, created our sense of how TV narrative works, and made the rules for others to stretch and break and transform. No Green Acres, no Breaking Bad.

In music it’s the same pattern. The Beatles encapsulated this within about five years. They scavenged their way through the short-half-life ecosystem of American R&B and rock, started out making brilliant but disposable love songs, and then used this sonic and performative grammar, developed by others, to create a whole new form of high art. And of course, they were not alone.

A lesser-known but I think perfect example of this is 10cc. Most of us (okay, the middle-aged among us) remember them as the band behind “I’m Not In Love,” “The Things We Do for Love,” and “Cry.” But I’m betting very few people know that before any of that, they were the creators of a virtual factory for some of the most forgettable two-minute bubblegum pop of the late ’60s, Strawberry Studios.

Kevin Godley remembers: “We did a lot of tracks in a very short time – it was really like a machine. Twenty tracks in about two weeks – a lot of crap really… We used to do the voices, everything – it saved ’em money. We even did the female backing vocals.”

Godley and Creme focus on the economics – this work allowed them to build up the gear and income they needed to do their own work. But I think it’s pretty clear from their (insanely complicated and frankly somewhat tortured) chronology: this was also a period in which they developed their working vocabulary of pop music, the colors and techniques, and gestures which they used to create some of the most sophisticated pop recordings of the 1970s and early ’80s.

I’ve always loved 10cc’s stuff. The detail, the obvious love of the craft, the effortless blend of emotional impact and cleverness, like a magic trick almost. “The Things We Do for Love” is perhaps the best illustration. It seems like a fluffy cloud that would blow away in a light breeze, all froth and sparkle. But when you really study it, or try to learn it, you find it’s a thing of crystalline beauty and subtlety. They make it sound easy, but it most definitely was not.

The “low art” made the “high(er) art” possible. No bubblegum market, no 10cc.

For me, this is a much more satisfying and compelling way of looking at our shared cultural heritage than the old dichotomy of high and low. A person could write another piece about how “high” culture influences new rounds of “low” culture (the recent Stooges doc Gimme Danger has some really interesting stuff about the influence of avant-garde classical composers on Iggy Pop). The point is: they’re not opposites, they are buddies. They rely on each other for existence. They feed each other constantly.

There’s great encouragement for me in this. Art tells us something very important about our divided society: we need each other.

PS. For other looks at pop music, check out our posts Let’s Make This Loud and Clear: Power Pop’s Alive and Well, If You Like ’80s Synth Pop…, and In Search of Perfect Pop: The Greatest Song The Cars Never Made.