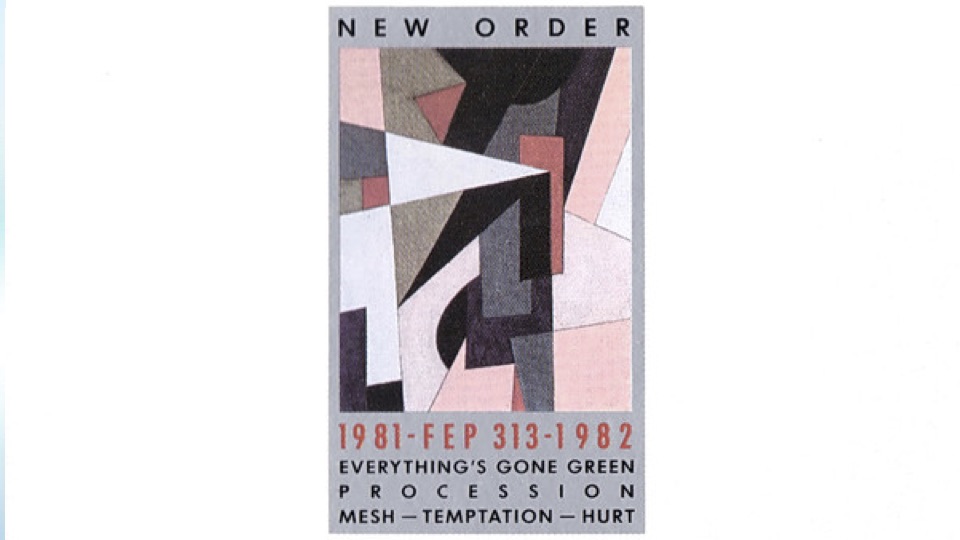 This 5-song EP was my introduction to New Order (and ultimately Joy Division, which I eased into only after being drawn in by New Order’s more approachable sound), and will always have a fond place in my heart.

It’s relatively obsolete at this point; the songs were later included on the 2008 deluxe-edition of New Order’s 1981 full-length debut Movement.  (For some inexplicable reason, last year’s latest re-re-issue of Movement included selected demos as bonus tracks but omitted the 1981-1982 EP songs.  Lame.)  And somehow this release (and the 2008 Movement edition) is not streaming on Spotify; you can find a few tracks in their EP versions (which I collected on the playlist below), but “Mesh” can be found only in its inferior demo version, and “Hurt” doesn’t stream at all.

Growing up in Chicago in the 70s and early 80s, I had to come to view anything disco-like as pure evil.  Sure, we all learned to line dance to the Bee Gees, rolling out our finest disco moves at each weekend’s Bar or Bat Mitzvah party.  But then came Chicago’s disco demolition, and anything with a dance beat was forever banished.

So it was quite a revelation when I got to college in the fall of ’84 and my buddy Chris pulled out “Temptation.”  Here was dance music that sounded more punk than disco, insanely catchy and with a slight edge.  It became something of a Friday night ritual to have a dorm room pre-party, blasting “Temptation” before heading out for the night, screaming “Oh you’ve got green eyes, oh you’ve got blue eyes, oh you’ve got grey eyes… and I’ve never seen anyone quite like you before” at the top of our lungs on the way to whatever party beckoned.  There are several other versions of the song included on various compilations, but I’m particularly partial to the original 12″ version included on the EP, though I can’t say whether this is for sentimental reasons or just because it’s better.

“Everything’s Gone Green” was similar in sound, perhaps a bit more atmospheric and lacking the killer hooks of “Temptation,” but still rocking a compelling beat and synth sound.

Related: “Take A Trip with Khruangbin”

While “Temptation” signaled the dance-oriented pop that would dominate New Order’s future singles, the balance of the EP was a little more somber and intense.  “Procession” is great, bathed in an interesting wash of synths and guitars, a bit more rocking than Movement but still a little spooky.  “Hurt” is percussive in a similar manner as “Green,” almost like a different take on the same song; while “Mesh” could be a Movement outtake, with that moody post-Joy Division darkness that pervaded the album.

It’s a brief EP at 5 songs; personally, I’d add the “Ceremony”/”In A Lonely Place” single and outtake “Cries and Whispers” and arrive at an interesting album bridging the gap from Movement to 1983’s Power, Corruption and Lies (basically the second disc from the 2008 Movement reissue).