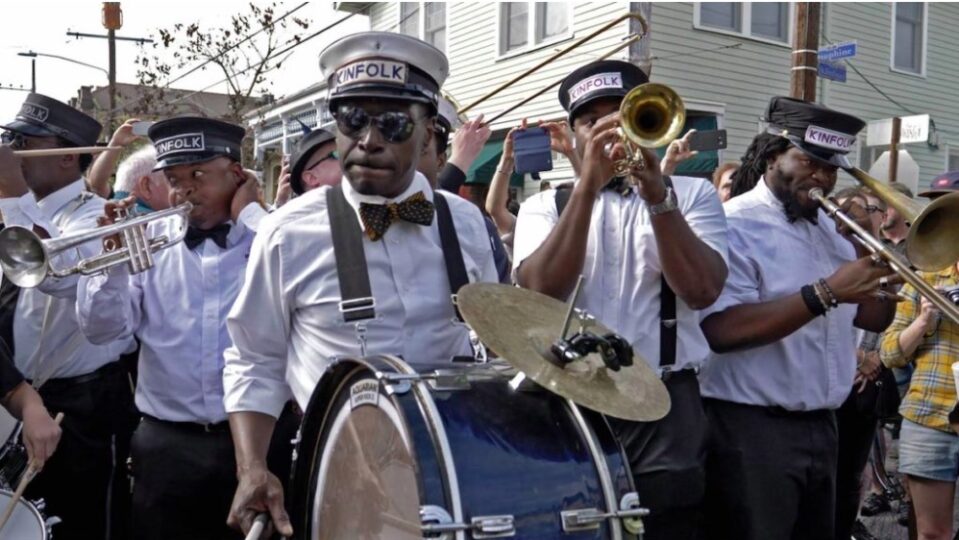 As America grapples with the ravages of COVID-19, many of us are understandably escaping to the seemingly infinite entertainment options offered online. But it would serve us well in this moment to seek out programs that remind us of what makes our nation great. America’s music, our greatest gift and export to the world, is a tapestry woven of centuries-old traditions, and many of those musical languages – jazz (in all of its subgenres and iterations), R&B, funk, rock and roll – were planted and harvested in the fertile ground of New Orleans. Up From The Streets: New Orleans: The City of Music is a stunning new documentary by Michael Murphy that studies the storied history of the Crescent City through the lens of its rich musical traditions.

Related: “The Tasty Chops of the ‘Lucky Chops'”

Legendary trumpeter Terence Blanchard serves as executive producer and host of Up From The Streets, an inspired choice as both he and director Murphy are native sons of New Orleans. Their shared reverence and respect for their hometown shines through in this film that is simultaneously an affectionate tribute and a deep scholarly document. Blanchard has stated that “The resilience of the people of New Orleans reflects the story of America,” and the film manages to provide a comprehensive overview of centuries of American music, politics, and social progress (and their inextricable binds) in just over an hour and forty minutes.

What makes Up From The Streets (and its subject) so compelling is that its musical story continues to this day. The through-line of tradition runs deep in New Orleans, and in a country where most cities willingly ignore (or forget) their own cultural history in favor of “development,” it is refreshing and inspiring to see a city that insists on maintaining its connection to the past while evolving into the future. Up From The Streets features firsthand testimony from New Orleans musical legends such as producer Cosimo Matassa, drummer Earl Palmer and songwriter Allen Toussaint, as well as authoritative commentary from luminaries like native sons Wynton Marsalis and Harry Connick Jr., but Murphy also gives a generous amount of screen time to younger New Orleans rap icons such as producer Mannie Fresh and “bounce” pioneer Big Freedia. When Freedia expertly draws the parallel between bounce and the call-and-response chants of the Mardis Gras Indians, it’s apparent that respect for the tradition looms large among New Orleans musicians regardless of age or genre.

The film also necessarily depicts the devastation wrought by Hurricane Katrina in 2005 but avoids lapsing into cheap sentiment or melodrama. Ben Jaffe, the son of Preservation Hall founders Sandra and Allan Jaffe and the Hall’s current creative director, simply declares that “You don’t understand silence unless you’re back in New Orleans without music,” and filmmaker Murphy focuses on the crucial role that music played in the Crescent City’s efforts to rebuild and revitalize. Without giving anything away, the results in that regard are moving and inspiring, and give the viewer a sense of hope for a better American tomorrow.

At one point Blanchard shares a sage remark from Herbie Hancock, who told him that “New Orleans has been the heart and soul of this country for generations…whichever direction New Orleans kinda moves, the rest of the country kinda moves.” Up From The Streets: New Orleans: The City of Music tells a rich, uniquely American story with a respect and attention to detail that will please those familiar with the subject, but also serves as an excellent primer to newcomers. The film is currently available for streaming on participating “virtual cinema” sites, with a portion of the proceeds of “virtual ticket sales” benefitting The New Orleans Jazz & Heritage Foundation’s Jazz & Heritage Music Relief Fund to support Louisiana musicians struggling during the COVID-19 pandemic. Up From The Streets: New Orleans: The City of Music could possibly be one of the definitive documents of New Orleans music, but it is also a film that serves as essential viewing in this moment in American history; it celebrates a city that has repeatedly turned dark circumstances into triumphs of the human spirit.

(Photo: publicity photo from the film)

0 comments on ““Up From The Streets”: The New Orleans Film We Need Now”