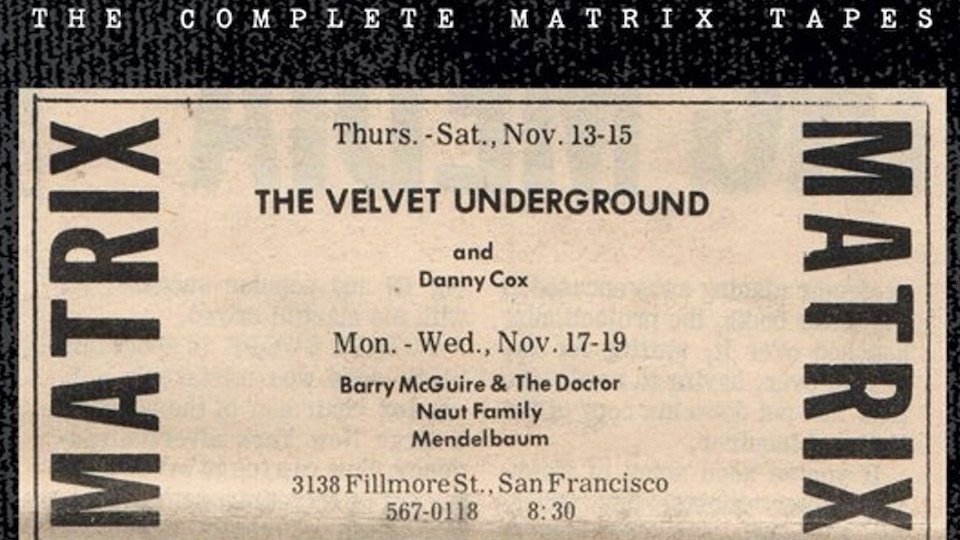 For many years, I agreed with the consensus that the Velvets were fools to let John Cale go. Individual moments, strong singles and idiosyncratic production notwithstanding, little of what the Velvets produced post-Cale could top the manic Velvet Underground & Nico or the powerful White Light/White Heat. “Pale Blue Eyes” worked with laconic charm, but who knows what wonders Cale’s viola could have brought to that piece? Then there’s The Matrix Tapes, a tapestry exploding with power-chord punch, the band exploring their live repertoire through punchy punk performances. Not only do the tapes demonstrate how good The Velvet Underground sounded live, The Matrix Tapes might be the finest album bassist Doug Yule performed on.

Related: “‘Coney Island Baby’: Another Side of Lou Reed”

Fittingly re-released on vinyl to celebrate the fiftieth anniversary, its a bare-bones rock record showcasing early singalongs “Sweet Jane,” “New Age” and “Rock & Roll” in their purest forms. Released in album form in 2015, the tapes garnered rapturous critical praise, Rolling Stone honoring them with the tasty soundbite, “a historic set of high-fidelity 1969 recordings capture the band at a pinnacle of white-hot guitar jams and streetwise poetics.” For Reed, a man who abhorred convention, pop or otherwise, these sets display the savagery he’d harness decades later homaging John Lennon with the galled “Jealous Guy” in 2001.

The Complete Matrix Tapes, recorded over two nights in San Francisco, contain 43 tracks split over 8 LPs. It showcases the virility, the passion, professionalism, and piercing qualities Lou Reed’s song catalog presents. “Well, the first two albums,” Yule admitted in 2014, “when I listen to any of that stuff I can hear the same roots in Lou, but I hear a lot of New York dark angst at the same time. The lyrics are more shocking. When you’re trying to get some attention, shock-value does go a long way. It’s understandable.” Yule, though a newcomer, fits himself nicely between Maureen Tucker’s hypnotic beat and Sterling Morrison’s bone-crunching pyrotechnics. Seemingly, he’d never played “The Black Angel’s Death Song” publicly before the gigs. Pulsating renditions of “ Venus In Furs”, ”There She Goes Again”, and “We’re Gonna Have A Real Good Time Together” demonstrate how in sync the four-piece fitted each other musically. Reed, poetic in verse and repartee, keeps the momentum flowing throughout the garage fuelled setlists. That Yule was not admitted with the band’s 1996 Rock and Roll Hall of Fame induction is an added pity.

The opener “I’m Waiting For The Man” showcases the lineage of British blues-rock bands that aped The Velvets from the eighties onwards. The deluxe edition set also includes nine previously unreleased performances, furthering the need for this vinyl to enter your collection.

The length, dexterity, and power that the eight -LP vinyl box set represents probably won’t appeal to the casual fan of the Velvets. This is a work of collective art, collecting the combined powers of the band whose fiery debut caused David Bowie and Bryan Ferry to start their own groups. It’s more Metal Machine Head than Transformer, more Sandinista! than Combat Rock, more Metal Box than Never Mind The Bollocks, more Yoko Ono Plastic Ono Band than Double Fantasy, and more Exile On Main Street than Some Girls. And it certainly shows Yule, perhaps unworthy of succeeding Reed as frontman on the regrettable Squeeze, does prove an admirable follow-up four stringer to the inimitable John Cale.