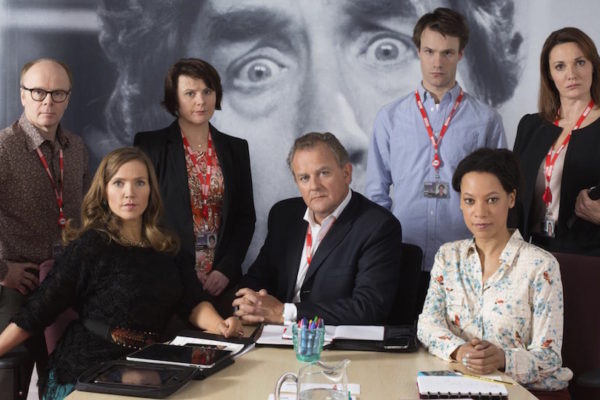 It may sound counterintuitive for the BBC to lampoon itself given its hard-earned, longstanding reputation of professionalism and integrity; however, in 2013, the British network bravely took a chance and decided to ridicule themselves with the deft comedy series W1A. A satirical portrayal of a day in the life of the British Broadcasting Company, the show took what could’ve been a lazy pitch overheard in the BBC boardrooms (and intended to promote its recently established New Broadcasting House) and turned it into one of the wittiest and most unique comedies of the past decade — blurring the line between fiction and [amazon template=right aligned image&asin=B005NHZAFK]reality, even more so than compulsively watchable hits like The Office, Parks and Recreation and Modern Family.

In truth, W1A is a spin-off of Twenty Twelve, a sly mockumentary centered around one Ian Fletcher (Hugh Bonneville of Downton Abbey fame), Head of Deliverance of the Olympic Deliverance Commission, an organization hellbent on bringing the world’s biggest sports event to London in 2012. Now at W1A, Fletcher finds himself at the helm of “Head of Values” at the BBC — basically, the Chief of Political Correctness. Unsurprisingly, Fletcher continually finds himself directing damage control for public relations SNAFUs, often taking on the responsibilities of his peers in the process.

Daily affairs range from production issues to public backlashes to scuffs with Prince Charles and Hugh Grant. Far from being a one-man show, Fletcher is surrounded by a well-balanced cast of strong personalities played by popular British stars such as comedian Jessica Hynes (Shaun of the Dead) and up-and-comers Hugh Skinner (Les Miserables and Ophelia Lovibond (Elementary). Voice over narration is provided by none other than the beloved former Doctor Who leading man David Tennant.

But good casting alone isn’t what makes this show so refined. Taking place almost exclusively at the BBC’s New Broadcasting House in Central London, W1A breaks the established sitcom formula in three very effective ways. The first and most pertinent is its fast-paced plot. While other TV comedies slow down the pace of the narrative to ensure viewer understanding, W1A provides a rapidly moving story with just as quickly executed dialogue, requiring the viewer to stay attentive. The second upending of expectation is the show’s depiction of its main character. Whereas many modern sitcoms portray the protagonist as an imperfect and hapless hero, Fletcher is — amidst the chaos which surrounds him — a model of composure, and problem-solving. The use of competency as a defining character trait is really refreshing in a medium that often celebrates the faulty and flawed. The last traditional component that W1A abandons is an ongoing romantic subplot. W1A spares the viewer of a recurring romance in favor of a series of workplace crises and while two minor “love stories” were featured in the show, they were simply there to further a larger story for comedic purposes. As such, W1A feels real, not overblown; a unique semblance that could prove innovative and set precedence for future TV comedies.

Although the show has recently ended as of October 2017, the series is available for streaming online stateside via Netflix.

PS. Making the case for the movie version of Absolutely Fabulous.  And a look at some of the best Britcoms.

Photo courtesy of the BBC

0 comments on “W1A: Self-Aware Satire from (and About) The BBC”