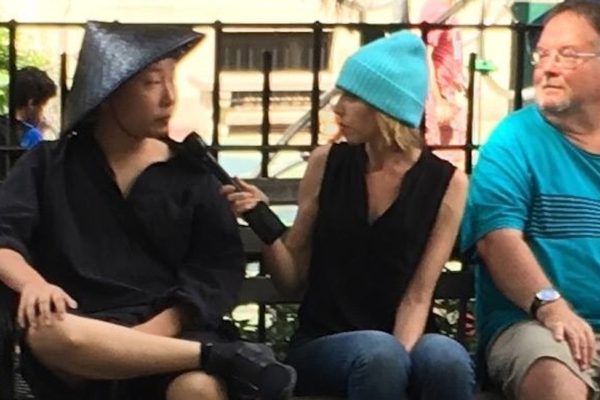 The host of CultureSonar’s new web series “Am I Too Old to…” may look very familiar to you. And for a good reason! You likely grew up with actress Maddie Corman, who had a string of early successes as a teenager [amazon template=right aligned image&asin=B00UGPGJEA]in the 1980s (Some Kind of Wonderful, Seven Minutes in Heaven, the after-school special I Want to Go Home…) and has gone on to appear on many familiar television shows since then (Girls, Curb Your Enthusiasm, Law & Order, The Good Wife, Smash). Her innate charm is on full display here.

Q: Your new web series “Am I Too Old to…” is incredibly sweet-natured. How have you maintained such self-deprecation after an acting career that dates to your adolescence?

A: Well thank you… I’m not always sweet-natured, just ask my kids! I don’t take myself too seriously and when I do, I try to catch myself and laugh at my own ridiculousness. I love doing this show and I think that on the series as in life, self-deprecation is a good way of making sure that I’m in on the joke.

Q: That first episode is all about fashion choices. But with all due respect to crop tops and torn jeans, who would be your ideal designer if you were headed to an award show this weekend?

A: Honestly… most of my clothes are from H&M, J Crew and Forever 21 (I know!) but if I were heading to an award show I would love to wear something by Maje because their dresses are incredibly fun but also flattering, unique and comfortable.  And you can wear a bra which is key for someone who nursed three babies.  Of course, I’d also wear my “Time’s Up” pin.

Q: Speaking of which, you’ve had your own #metoo experience. How has that affected your point of view?

Well, that’s a very big, very important subject that’s really too complex and nuanced to address in a simple Q&A like this. I’ve spoken about my experience at length elsewhere and would be willing to devote a separate interview to it here. For now, suffice to say that I’m hopeful that some good things are indeed coming out of these many, many deeply painful experiences.

Speaking out was not an easy decision for me but I’ve received so much love and support which is truly heartening. That’s actually one of the reasons I’m excited about “Am I Too Old to….” So much of our national dialog these days is polarized and fraught. It’s nice to remember that, for the most part, we are generally very good to each other. For example, the folks on the street treated me kindly — even when they thought my outfit didn’t work. Sure, it may seem silly to attach a larger meaning to an awkward crop top; but it’s not trivial to see people be civil to each other. I’m proud of that and eager to see more of it.

Q: Is there anything to which you would now say, “Well, I’m definitely too old to…”

A: Sleep in a youth hostel…but that might actually be fun…there is one thing I’m too old for but you’ll have to watch the rest of the episodes to find out what that is…

Q: What role are you most recognized for today?

A: “Laura,” the little sister in Some Kind of Wonderful. When I took my kids to Disney a few years back, a guy ran up to me shouting “He’s a man for Christ’s sake!” Over and over… I tried to shield the kids from this approaching maniac and then I realized he was quoting my line from the movie… He was actually a lovely fellow. Since I did a bunch of movies and after-school specials in the ’80s, a lot of people around my age just think I went to camp with them.span

Q: Guest starring on Law & Order is a rite of passage for every New York actor. You’ve actually been on a few times. Do you have a favorite memory associated with that franchise?

A: Is James Taylor a rock band? Just kidding … kind of. I’m a big nerd when it comes to music but I love The Beatles and I’m thrilled to report that they’re pretty much the one band that my entire family can all agree is consistently amazing.

Editor’s Note: Click here to watch every episode of Am I Too Old to.. with Maddie Corman.

Photo of Maddie Corman by CultureSonar