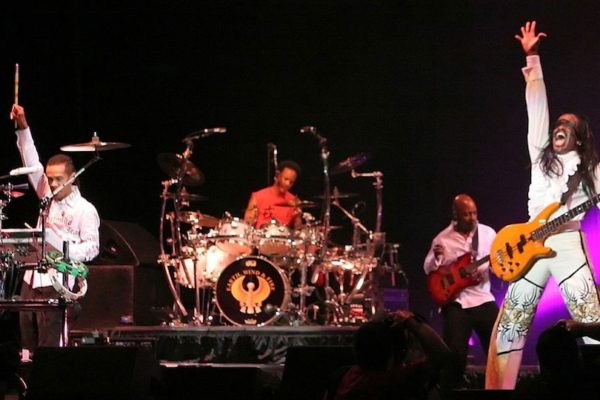 Editor’s Note: This post, originally published on 3/4/16, is one of “Our Greatest Hits” — so enjoy it again!

The 2016 passing of Maurice White proved a good time to take a closer look at the first hit single from White and his band Earth, Wind & Fire, “Shining Star.” Maurice White had begun his musical career as a session drummer for Chess Records and a former member of the Ramsey Lewis Trio. Together with his brother, Verdine, White formed Earth, Wind & Fire in 1970 as a ten-piece band with three vocalists (including White) and a three-piece horn section. White’s idea was to use this large band to blend his background in blues and jazz with the soul of Motown and Stax and the funk of James Brown and Sly & The Family Stone. Their 1971 self-titled album and a follow-up failed to garner much attention. So, White broke up the band, keeping only his brother, and recruited new musicians, including vocalist Philip Bailey.

The reformed band’s first three albums showed White still searching for the band’s sound. They showcased an eclectic blend of soft rock (a cover of Bread’s “Make It With You”), folk-rock (a cover of Pete Seeger’s “Where Have All The Flowers Gone?”), jazz/fusion (“Power,” “Spasmodic Movements”), and African music (“Rabbit Seed”). Often present alongside the three-piece horn section and Larry Dunn’s funky clavinet was White’s kalimba, an African thumb piano that would feature prominently in EW&F’s recordings.

By 1974, EWF’s albums and live concerts had built a large audience, mostly within the African American community. However, mainstream success still eluded the band.

The band’s breakthrough came with 1974’s That’s the Way of the World. White had been approached about writing the score to a film about the music business starring Harvey Keitel. The film was released in 1975 and promptly bombed. Fortunately, White had predicted the film’s failure and released his soundtrack in advance of the film.

“Shining Star,” the album’s opener, was written by White, Bailey, and Dunn. According to White, he was staring at the starry sky one night when he came up with the basic lyric for the song. Working with Dunn and Bailey, he managed to craft a perfect synthesis of everything the band had done before.

The song kicks off with a two-bar boogie-woogie, ragtime guitar figure in the key of E that could have come off of a Fats Domino record. Left-handed guitarist Al McKay manages to swing it just enough to make it funky. The pattern is repeated, this time doubled by Verdine White’s bass. When the introduction ends, a blast from the brass (0:11) announces the song’s funky groove and the vocals of Maurice White and Philip Bailey.

On World, White brought in a five-piece horn section, which he dubbed the Phenix Horns. Together with the band’s saxophonist, Andrew Woolfolk, and the arrangements of White and Charles Stepney, they created one of the most powerful and influential horn sections in rock history. Alan Light commented on this in the liner notes to the EW&F collection The Eternal Dance:

Rather than incorporate the horns primarily for emphasis or punctuation, as James Brown or the Stax bands had done, EW&F wove them into the arrangements, playing fluid secondary melodic lines and then unexpectedly leaping into the foreground. Along with the early recordings of such EW&F contemporaries as Kool and the Gang and the Commodores, this sound would spawn an entire school of horn-based R&B pre- and proto-disco groups, including Slave and Brass Construction.

White’s lyrics often reflected his positive outlook on life. In one sense, he was the perfect flower child, singing about love and dreams and spirituality. In “Shining Star,” White’s opening couplet sets the stage:

When you wish upon a star,
Your dreams will take you very far

In the six-line verse punctuated by brass stabs, the shining star is in the sky, a source of inspiration. In the chorus (0:47), White tells the listener that s/he is the shining star:

The contrast between the verse and the chorus is a key factor in the song’s success. The verses are firmly rooted in the key of E and contain one measure of vocal followed by one measure of instrumental. Tap it out, and you’ll see what I mean:

The chorus moves around the circle of fifths without consolidating around a single key. This makes the return of the verse’s E groove so satisfying. The chorus’ vocal doubles the speed of the verse by making each measure two beats of vocal and two beats of rest:

Before the verse can return, the song’s key is further obscured with an instrumental section (0:56). In the first two bars, Dunn’s electric piano ascends and descends over an E blues scale. Then, over a series of ascending brass chords (1:02), McKay plays a jazzy solo. After four bars, the instrumental comes to a hard stop.

Two brass stabs announce the return of the verse and the main groove (1:12). This time, the verse is extended to six couplets, delaying the inevitable return of the chorus. The sparseness of the groove with it’s repeated E9 chord makes the listener long for the chorus’s return. When it does (2:09), it’s repeated three times as if in consideration for making the listener wait over a minute to hear the chorus again.

The logical choice would have been to fade out the song over repeated choruses. But, the band takes a bolder and more memorable approach. All the instruments drop out (2:38), leaving nothing but handclaps and a few bass notes. White and Bailey sing:

The phrase is repeated a second time, while the claps and bass fade away. On the third and final time, the vocals are laid bare and boosted in volume while the echo is stripped away. This whole coda has the effect of moving the singers closer and closer until it seems as if they are singing directly in your ears. It’s as if the shining star has come down and been absorbed into the listener — a magnificent and memorable way to end the song.

“Shining Star” was Earth, Wind, and Fire’s first crossover hit, topping both the Billboard Hot 100 and Hot Soul Singles charts. It also earned the group the first of six Grammy Awards it would win between 1975 and 1982.

The album That’s the Way of the World would also reach the lead position on both the Pop and Black Albums charts bolstered by the other singles from the album, “Reasons” and the title track. The album was also the start of a remarkable six-year run of top 10 albums and singles for the band.

Earth, Wind & Fire were musical pioneers. Their unique blend of jazz, rock, soul, and world music along with their positive lyrics and hooky grooves influenced artists from Michael Jackson and Prince to the Red Hot Chili Peppers and Living Colour to Janelle Monae and Bruno Mars. And it all started in 1974 with “Shining Star.”

PS. For more on the making of great music, check out our posts David Bowie: Sometimes Three Years Are Better Than Five, These Guys Were REALLY Behind the Music, and With The Beatles, From the Beginning. And if you like Earth, Wind & Fire, you may also like Snarky Puppy’s latest release and the musical combinations you’ll find on NPR’s Tiny Desk Concerts.

2 comments on “What Made “Shining Star” Burn So Bright?”