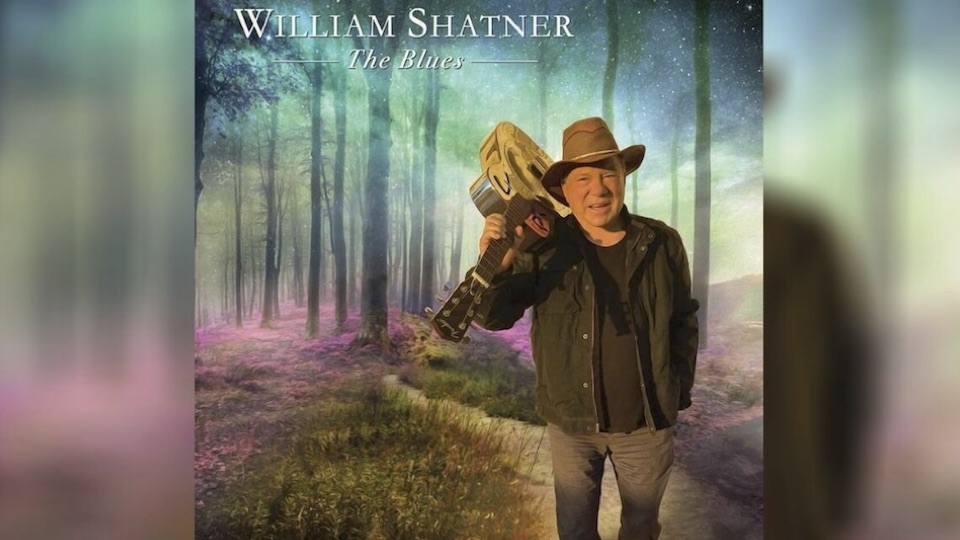 Editor’s Note: With 90-year old William Shatner set to blast off this week aboard Jeff Bezos’ Blue Origin rocket, we thought it appropriate to revisit an interview we did with him last year.

In addition to his iconic role as James T. Kirk on Star Trek, William Shatner has appeared in a host of movies and television series, including the title role on T.J. Hooker, as Denny Crane on Boston Legal, and in memorable episodes of The Twilight Zone, Thriller and The Outer Limits. He also has a long-standing career as a recording artist. Shatner released his debut album, The Transformed Man, in 1968, which featured idealized performances of spoken word pieces and songs such as “Lucy In The Sky With Diamonds.”

In 2018, the renowned actor released Shatner Claus, a Christmas album featuring Iggy Pop, Henry Rollins, and Judy Collins. For his latest release, The Blues, Shatner tackles one of the most beloved musical genres of the rock and roll era. The album features a collection of classic blues and R&B tunes such as “Crossroads” and “Mannish Boy,” all interpreted by Shatner in his own inimitable style. The all-star line-up of musicians who appear with him on the record includes Ritchie Blackmore, Steve Cropper, Albert Lee, and Jeff “Skunk” Baxter. I recently spent some time talking to Bill about the record, and his approach to recording these quintessential songs.

Q: What made you decide to take on the blues for your latest album?

A: I had done a Christmas album for Cleopatra Records, which had sold well for the label, and they approached me about doing another project. We discussed doing a blues album. Since I didn’t have much exposure to the genre as a young man growing up in Ottawa, I decided to do some research and really study the blues before going forward with the project. I had a lot of help from people like Billy Gibbons, who helped immerse me in the music, and gave me a lot of background on the genre.

Q: Your performances on the album are rooted in your unique style, and you throw yourself into them with a great deal of gusto. What was your process like for recording these beloved and well-known songs?

A: If you’re going to do something you should do it with gusto, right? As for the songs, I needed to find my own approach to performing them. Each song we chose for the album carried with it the tradition of those great voices that had originated them. They became classics because of the uniqueness of those artists. I wasn’t even going to try to compete with someone like B.B. King. I approached every one of the songs as an actor, and I looked at it as a scene I was given to perform. For example, the scene is “The Thrill Is Gone,” and you’re talking how sad you are that the passion has left your relationship. I wanted to convey that sense of loss and disappointment you felt with yourself, and in your life, when you’re talking about a love that’s no longer there.

Q: You have a phenomenal line-up of musicians backing you on The Blues. What was it like working with legends like Ritchie Blackmore, James Burton, and Sonny Landreth?

A: Some of these guys, like Ritchie Blackmore, had worked on other albums of mine, and when we asked them to come back, they did. I half expected them to say “I’m never gonna play with that guy again,” but a number them returned for this project, and some others jumped at the opportunity to work on it. That was the most signal honor of all. There is a list on this album of some of the greatest musicians alive today, and they made me look good. It was an extraordinary compliment to me to be able to work with them on The Blues, and their work was a great complement to what I was trying to accomplish on the album.

Q: Now that you’ve tackled the blues, do you have any other musical projects coming up in the future?

A: I’m actually doing another album. It’s an autobiographical piece. I’m conferring with a lyricist in NYC and a composer in upstate New York, and I’m in Los Angeles. We’re working together on it now.

Q; You always manage to keep active, and work on a lot of projects. How do you do it?

A: Well, we’re here for a short time and the whole idea is to do as much as possible, whether it’s with family or friends, doing good works or creating music, art, and all the rest of it. The goal is to get as much done as possible before the curtain is drawn.

You can get more info on The Blues by visiting Cleopatra Records.