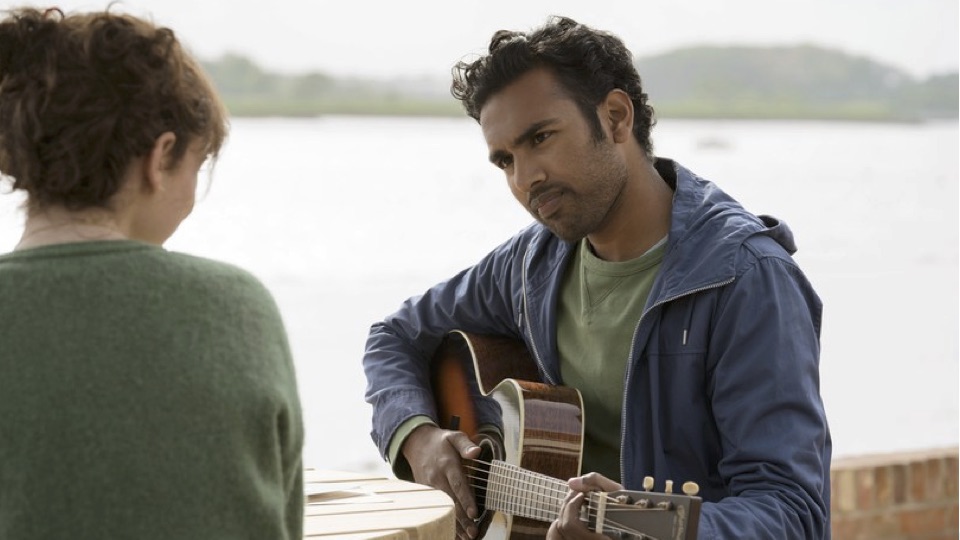 A 12-second international power outage yields a world where The Beatles have been eradicated from the earth to all but one person. That’s the absurdly frightening notion explored in the new romantic comedy, Yesterday. This British film, directed by Danny Boyle (Trainspotting, Slumdog Millionaire and Steve Jobs) and written by Richard Curtis (Four Weddings and a Funeral, Bridget Jones’ Diary and Love Actually), is a thought-provoking crowd-pleaser that takes earnest musician Jack Malik (Himesh Patel) on a bizarre spiritual journey.

Jack is an obscure young singer-songwriter from a working-class seaside town in England. He strums his guitar and sings his standard “Summer Song” in pubs, mostly to an audience of his loyal buddies, He also has a remarkably hands-on “manager” and childhood friend, Ellie (played with enormous charm by Lily James), who cares mightily about his sparse gigs and general well-being. It’s abundantly clear to everyone but Jack himself that Ellie is deeply in love, yet they seem stuck in the comfy “friend zone,” both pondering the seeming futility of his music career.

Then comes the defining moment where the whole world goes dark for 12 seconds (cleverly shown through light-to-dark-to-light arrays of recognizable global images). Jack is hit by a bus and winds up in the hospital. He’s bruised, two teeth have gone astray and Ellie is at his bedside. When he jokingly asks “Will you still need me, will you still feed me, when I’m 64?”, it’s confoundingly clear that Ellie has no idea that he is referencing a Beatles lyric.

Through other witty misunderstandings that we won’t spoil, it becomes clear that (in this alterna-world) The Beatles have been wiped from memory to all but Jack. He frantically looks them up on the internet: individual band member names yield links to Pope John Paul and King George. Inexplicably, other cultural aspects have turned to mist as well.

When his friends gift Jack with a new replacement guitar, he happily strums the McCartney classic “Yesterday” for them. It’s touchingly apparent from their faces that they’ve never heard this amazing song. He tries to explain its origin, but may as well be speaking Swahili.

If Jack wants to have any edge in his flat-lining musical career, he can internalize The Beatles’ songbook and pass them off as his own. That’s the basis of this light-hearted “what if?” fantasy: a warm movie that celebrates not only the magic of The Beatles but the appeal of quietly-quirky people doing the best they can.

Jack begins to make a (faux) name for himself as he performs Beatle tunes with élan and skill He draws feverish crowds, uneasy worship and the attention of a sharky agent Debra Hammer (Kate McKinnon), as she tries to prep him for mass marketing in the most obnoxious ways possible. He loses his confidence and mojo. Worst of all, he alienates his dear friend Ellie. Jack Malik is a basic guy with a kind heart; he may be ambitious but he’s not comfortable with the devil’s deal he’s made.

The movie is an entertaining dose of space/time continuum fantasy and poignant food for thought. There are witty in-jokes and a fun performance by singer Ed Sheeran. It’s filmed with great eye appeal and fresh graphics that keep the viewer engaged on a few levels. The romance brewing (and cooling) between Jack and Ellie isn’t all that unique, but the performers bring squirmy, sweet humanity to their dilemma.

Yesterday is a love letter to The Beatles through the lens of hypothetical loss. As Jack performs their standards to bigger, swooning crowds, we can’t help but compare his decent talent and middling stage presence to the extraordinary charisma of John, Paul, George, and Ringo. In truth, there is no comparison. But Jack’s sweet voice and guitar skills are enough to ignite this world with the excitement of the Beatles’ song catalog, the mother lode of musical joy.

While Yesterday is not a perfect movie, its heart is in the right place. You’ll walk away not only humming “Hey Jude” but thanking the heavens for the miracle of the Fab Four.

0 comments on “Yesterday: A World Without The Beatles?”