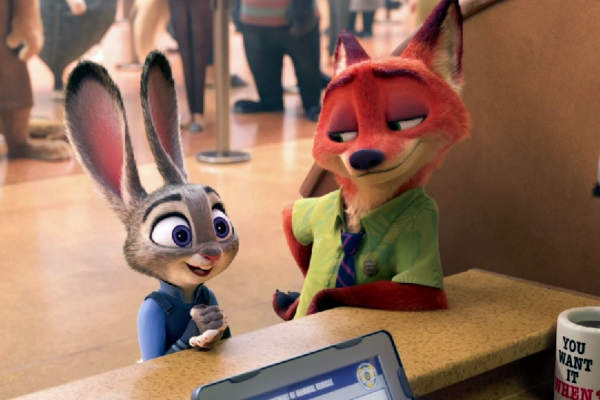 In a world where animals have evolved past their base prey and predatory instincts, Judy Hopps (Ginnifer Goodwin), a rabbit from the countryside, dreams of being a cop in the big city of Zootopia. This proves to be a bit of an uphill battle due to her small stature and how bunnies are perceived by the community at large. But through hard work, perseverance, and some government initiatives, she achieves her goal…only to get snubbed into traffic duty by her more burly and aggressive boss (Idris Elba). She comes across a con artist fox named Nick Wilde (Jason Bateman) and while they both have prejudices against each other, both get roped into the missing predators case, finding more out about each other and uncovering a plot that may tear the city apart.

Zootopia is smart, clever, funny, heartfelt, brilliant, and best of all, it tries to get a good message to children. This comes at a perfect time because I had my faith in children’s media severely damaged by learning of an awful movie that talks down to kids at an absolutely insulting level. You’ll find none of that condescension here, only stellar animation, brilliant writing, and some of the most likable characters this side of Mr. Rogers. Judy, apart from being a great role model, is fun, energetic, and has a good heart, but is also very flawed. She and her family have a severe prejudice against foxes, mostly due to their background and past experiences, but the film doesn’t make her out to be a bad person (well, animal) when it comes into play. Nick is also a great character with a smooth talker personality and he also really sells his emotional scenes. His backstory is one of the the saddest things I’ve seen all year, mostly because it’s so close to reality, but I won’t dare spoil it.

One of the strongest points of the movie is its incredibly realistic portrayal of prejudice and how it spreads. When the first trailers came out, I just nodded and said to myself, “All right, we’ve got a gender equality metaphor movie, so I know what to expect.” Imagine my surprise when I found that they were tackling both gender and race with rather apt metaphors. It captured the subtle mental scarring of being under the pressure of prejudice, touched on the accidental use of buzzwords in the media, and showed off the subconscious ways that people’s minds can be prejudiced against certain folks, even when we tell ourselves that we aren’t. People can get very defensive when they perceive themselves as being falsely accused of racism, so something that can present this issue to kids while they’re still developing isn’t just important, it’s necessary.

If I had one complaint, it was that we don’t get to see enough of the city of Zootopia. We’re told about four of the twelve environmental districts and that’s pretty much all we see. But that’s a big nitpick and the only reason I have it is because this world is so amazing that I want to see more of it. Are there swamp or mountain sectors? How about an underwater district? Do any animals other than mammals live in Zootopia? (That one in particular made me scratch my head. Something called the Mammal Inclusion Initiative helped Judy get onto the force, but all of the force are mammals of some kind, so that’s confusing.) I hope this project develops to give us a guidebook or interactive experience to learn more about this world because I can’t get enough of it.[amazon template=right aligned image&asin=1452122237]

I could honestly write an essay on why I love this film, but I’ll just leave you with this: young, old, man, woman, nonbinary, and whatever your background, there’s a place for you in the seats of Zootopia.

Fun Tidbit: Depending on where you are in the world, the newscaster animals are different. In the U.S. and Canada, it’s a moose, but it’s a panda in China, a tanuki in Japan, a koala in Australia and New Zealand, a jaguar in Brazil, and probably many others that haven’t been spotted yet. And all of them are voiced by famous news anchors of the region.

PS. For a look at some other movies we love, check out our posts An Icelandic film about two elderly brothers and their beloved sheep? Yes, please!, Discomfort and Joy, A Little Film You May Not Have Noticed, and Sundance’s Magnificent 7.

1 comment on “Zootopia: A Kids Movie With Lessons for Us All”