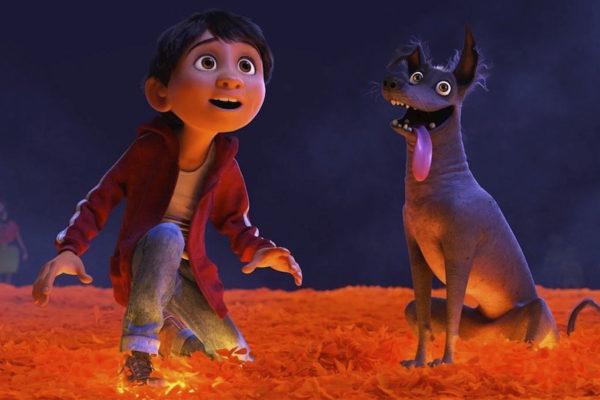 After the rousing success of Inside Out and its breathtaking ingenuity in depicting the internal workings of the mind, Pixar once again delves into the metaphysical with a glittering, family-friendly cartoon about, of all things, bereavement. Clearly, no concept is too big or too sensitive for this Disney subsidiary to tackle, and the studio has once more risen to the challenge. Nominated for this year’s Best Animated Feature Film Oscar (and having already won the Golden Globe in that same category), Coco justifies all the accolades by being enchanting, heartwarming, [amazon template=right aligned image&asin=B078TQJRRV]and somehow — despite its subject matter — unexpectedly life-affirming.

The movie’s hero is 12-year-old Miguel (Anthony Gonzalez) who fantasizes about being a famous musician like his deceased movie-star hero Ernesto de la Cruz (Benjamin Bratt). However, pursuing his dream turns out to be easier said than done once we learn that Miguel’s great-great-grandmother’s heart was broken when her musician husband abandoned her and her daughter. Since then the entire family has been banned from listening to or playing music. Miguel, who has been forced to keep his passion for guitar-playing a secret from the rest of his family, can’t bear the restriction any longer and decides to take part in his town’s annual Day of the Dead talent show. In order to do so, he steals a guitar from his idol’s tomb then suddenly finds himself transported to the Land of the Dead where he discovers that he can’t return home unless he finds a deceased family member to give him a blessing. Convinced that he’s related to his musical hero Ernesto de la Cruz, Miguel sets off with the help of Hector (Gael García Bernal), a deadbeat vagabond skeleton, in order to find his missing ancestor and get back to the Land of the Living.

Aside from its spectacular 3-D animation and toe-tapping musical numbers, Coco’s biggest success is likely its absolute commitment to depicting Mexican culture in a colorful yet sensitive manner. The vibrant richness and exquisite detail brought into play when depicting the country’s traditions and aesthetic sense means Coco feels inclusive rather than exotic, thereby negating any concerns viewers might have about cultural clichés or appropriation. Too often, Mexico is portrayed in a negative light, a place of danger and violence and drugs. In a way, Coco acts as a curative by celebrating so many things, right down to the twine around the tamales. Do you think it’s a mere coincidence that Coco has become Mexico’s highest grossing film?

While the movie sets out as a fast-paced, multi-colored escapade, the universality of themes such as creativity, love, and family make it a moving and resounding viewing experience in much the same way that its predecessor Inside Out was. Basing much of its narrative on how families honor the deceased on one national holiday, Coco provides a discerning lesson for young children on how to better understand grief. This sunny family adventure explores what it means to pass away, and how to weigh the worth of a life. Dementia and legacy are also unusual topics to tackle in a children’s movie, but Coco does so with a grace that will affect audiences both young and old. It’s sure to enchant you with its infectious charm —  and there’s no doubt it will linger with you long after the credits roll.

PS. Bizaardvark is a Disney show for tweens that parents dig, too.  And there are some other great movies coming in 2018.

0 comments on ““Coco” – A Life-Affirming Look at Death…for Kids!”