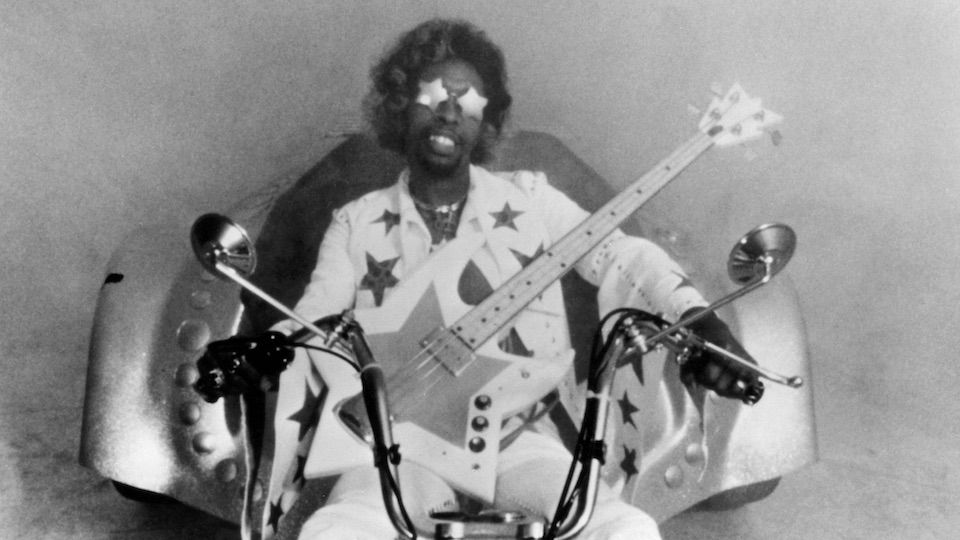 In an interview with legendary R&B/Soul radio DJ Frankie Crocker in March of 1980, Parliament-Funkadelic mastermind George Clinton was asked when did he feel that he had finally made it in the music industry. Clinton immediately responded, “When Bootsy (Collins) made it. When he made it, that’s when I felt secure”.

Bootsy’s Rubber Band, launched in 1976, originally went under the name “Bootsy’s Early Sunn.” Collins landed in the P-Funk camp in 1972 on the double album release by Funkadelic entitled America Eats Its Young. As Collins tells it, it was decided early on that through his participation in the Funkadelic and Parliament albums released in the next few years, Clinton would secure a solo deal for him and his Cincinnati-based band formerly known as Complete Strangers.

True to his word, hot off of the success of Parliament’s Mothership Connection (which featured heavy participation from Collins), Clinton snagged Collins a deal with Warner Bros. Records (along with Funkadelic and later, Eddie Hazel). Bootsy and his Rubber Band would remain on Warner Bros. for six years, churning out 6 albums and 18 singles. Bootsy’s Rubber Band became P-Funk’s most successful spin-off act and became a powerhouse Funk unit in their own right. A close examination of their period on WB tells us why.

STRETCHIN’ OUT IN BOOTSY’S RUBBER BAND

Released weeks after Parliament’s Mothership Connection, the debut album from Bootsy’s Rubber Band lives up its name. The band delivers elastic grooves with liquefied vocals from Collins and front ground vocals from Gary Mudbone Cooper and Robert P-Nut Johnson. The album’s standout track “I’d Rather Be With You” became a decent-sized radio hit that’s influenced generations of musicians. It has also been interpreted by a diverse array of artists including Beyonce’, Childish Gambino, Too Short, and Adina Howard.

Coming one year after their auspicious debut, Bootsy’s second album establishes his band as powerhouse Funk soldiers defining Funk on their own terms. Undoubtedly bolstered by their appearance on the TV series Soul Train the following month, Bootsy’s second album peaked at number one on the Billboard R&B album chart. The album’s first single “The Pinocchio Theory” becomes the band’s first top ten R&B hit.

BOOTSY! PLAYER OF THE YEAR

Bootsy’s third album officially turns the Rhinestone Rock Star into an international phenomenon. Both the album and it’s lead single “Bootzila” top the R&B album and singles charts. The album’s sales are further bolstered when the band embarks on a tour of the UK. The album’s second single “Hollywood Squares” competes with Parliament’s “Funkentelechy” for the title of “Summer Jam of 1978”. A pair of star-shaped shades were included in the original vinyl release.

THIS BOOT IS MADE FOR FONK-N!

After a year and a half wait, Rubber Fans and Funkateers embrace the fourth BRB album with immediate zeal. Embracing the conceptual side of his potent Funk stroke (similar to the approach of Parliament and Funkadelic), This Boot possesses more complex grooves than his previous albums, as exemplified in the album’s first single “Jam Fan (Hot)”. The original album release featured an unfinished comic book called…wait for it…The Almost Finished Coloring Book, drawn by P-Funk illustrator Overton Loyd.

Loosely tied in with the New Doo Review concept introduced on the Parliament album Trombipulation, Ultra Wave sees the Rubber Band inexplicably missing from the scene (apparently due to a lawsuit brought on by a country music band bearing the same name). Continuing the conceptual stroke of the previous album, Ultra Wave boasts progressive Funk statements in the form of the first single “Mug Push” (which strengthens the groove between the rock and the hard place) and the ever-brilliant “F-Encounter”.

THE ONE GIVETH, THE COUNT TAKETH AWAY

The WB era comes to a quiet climax with Bootsy returning to the “Bassics”. Some of his finest bass playing is showcased throughout this album, especially on the album’s first single “Take A Lickin’ And Keep On Kickin’”. In a unique turn of events, the track “Count Tracula (This One’s For You)” was reconfigured by two DJ’s from Philadelphia into “Body Slam”, the last single that Bootsy would release for the label (ironically released under the name Bootsy’s Rubber Band). The reconfigured track was co-written by Joel “Razor Sharp” Johnson (RIP).

Bootsy would release more albums on labels such as Columbia, 4th and Broadway, Rykodisc, P-Vine, WEA/Black Culture, the Shout Factory, and his current label Mascot. Those albums have provided Bootsy with the opportunity to work with a variety of artists outside of the P-Funk stable, as he would collaborate with diverse artists such as MC Lyte, Deee Lite, Fatboy Slim, Sheila E, Bill Laswell, George Duke, Stanley Clarke and even Color Me Badd.