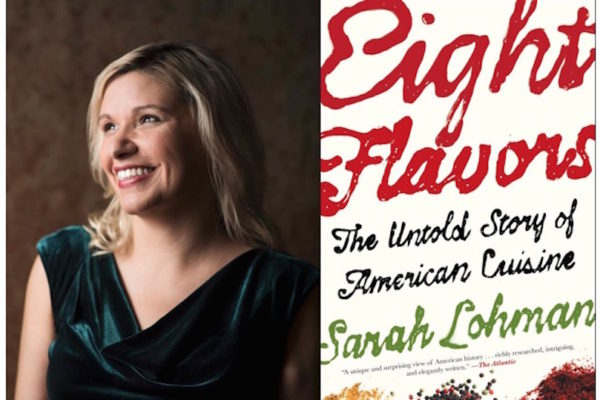 Our national menu has many international flavors—soy sauce, chili powder, garlic, even monosodium glutamate—but what lies ahead for our collective palettes? In her delightful book Eight Flavors: The Untold Story of American Cuisine, the always-entertaining food historian and blogger Sarah Lohman doesn’t merely provide the fascinating stories behind the flavors that have been the most influential to date. She also gives us a glimpse of what may be in store for us. In the excerpt below, she writes of matcha, a potential flavor we may be seeing much more of in the future. Eight Flavors is out in paperback on Nov. 14.

“It might have been in the Paris bakery of Sadaharu Aoki that matcha was first used in pastries. Aoki, a Japanese patissier who opened his first shop in the Seventh Arrondissement of Paris in 1998, became known as a quirky chef who used traditional Japanese ingredients in classic French pastries. Matcha’s bold green color appeared in his cakes, tarts, macaroons, and even croissants. As cookbook author David Lebovitz described the trend, ‘It was if someone hit the switch one day, and all of a sudden a flash of electric-green took Paris by storm. You couldn’t walk by a patisserie without seeing something sweet and shockingly green standing out among the more traditional-looking pastries in the lavish window displays.’  Matcha arrived in New York in the early 2000s, either in French or Japanese bakeries; it’s unclear. But because America has a history of emulating both of these cultures, I’m not surprised that the trend caught on.

“In 2001, Martha Stewart’s holiday cookies special issue magazine described a recipe for Green Tea Shortbread Leaves, which incorporated green tea, saying it ‘gives buttery shortbread a mild, somewhat exotic flavor, as well as a delicate tint.’  Matcha appeared by name in 2015 in Martha Stewart Living, in a recipe for Green Tea Crepe Cake, as an ingredient in the pastry-cream filling. The recipe is a blend of French techniques and Japanese ingredients, much like Aoki’s work.

“And recently, I walked past Le Pain Quotidien, a chain bakery, on the south side of Bryant Park in Manhattan. It had a sign out front that said, ‘Try Our New Matcha Muffins!’ Afterward, on a hunch, I searched ‘matcha’ on Walmart’s web page. A year ago, I got no hits. As of this writing, Walmart offers over a dozen matcha products, from the traditional green tea, to matcha caramels and matcha green tea sea salt.

“It’s likely that matcha tea’s purported health benefits have fueled the growing trend, as has increased immigration from Asia. Although matcha is a strong candidate for a ‘ninth flavor,’ it remains to be seen whether or not it becomes a universal part of American cuisine. But more than two hundred years after dumping tea into Boston Harbor, Americans seem ready to put down the coffee cup and give tea another chance.”

0 comments on “What’s the Next Big Flavor for America?”