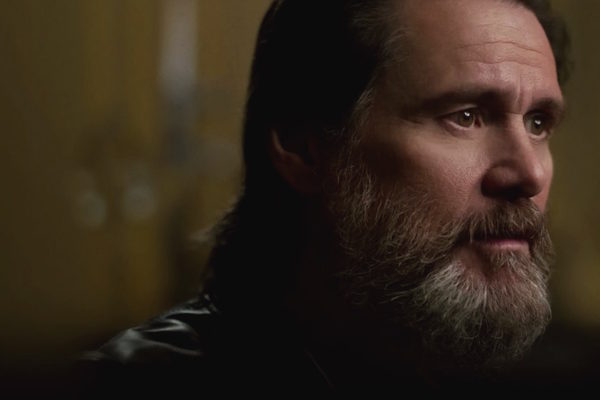 Most documentaries are made in the following manner: the filmmaker finds a subject, picks up a camera, then starts shooting the story. Pretty obvious, right? But that’s not always the sequence of events. Because sometimes that order is flipped, as material shot years (or even decades) before it is discovered by a filmmaker who then thinks “Hey, I can do something with this.” Three recent documentary finds take such recovered footage as their starting point, then use this old material to shed new light on incredibly different subjects, ranging from comic actors (Jim & Andy: The Great Beyond) to Russian roadways (The Road Movie).

Jim & Andy: The Great Beyond (Netflix)
This may be the world’s most fascinating “making of” DVD extra ever, consisting mostly of behind-the-scenes footage of Jim Carrey shot during the production of Milos Forman’s Andy Kaufman biopic Man in the Moon. But in a larger sense, Jim & Andy is something much better and much, much stranger. Even how the footage came to be is weird. For reasons that aren’t entirely clear, Carrey enlisted two of the late Kaufman’s friends to film him on set — resulting in footage that sat, unseen, in Jim Carrey’s office for 20 years until found by producer Spike Jonze. That footage reveals that Carrey was inspired (or perhaps possessed) to remain in character as Kaufman (or one of his characters) for the entirety of the shoot. As the star recounts in a present-day interview, “Andy Kaufman showed up, tapped me on the shoulder and said ‘Sit down, I’ll be doing my movie.’ What happened afterward was out of my control.” Indeed, what transpired goes way beyond mere Method acting. We see Jim-as-Andy bewilder/infuriate his director/costars, yet comfort Andy’s real family with a reunion of sorts a decade and a half after Kaufman’s death. We also see Jim as Kaufman’s acerbic alter ego Tony Clifton knock Carrey (“He’s a coward!”), much as he railed against Kaufman back in the ’80s. Man in the Moon is a fine film — Carrey won a Golden Globe for his performance — but this previously unseen off-camera performance is more true to the spirit of its subject than anything in Forman’s biopic. Is it a prank run amok? A psychological breakdown in process? Perhaps both. Either way, you’ll find it impossible to look away.

Dawson City: Frozen Time (Amazon, iTunes, Vudu)
On truly rare occasions, a documentary filmmaker finds footage in a hole in the ground—literally. In 1978, a treasure trove of lost movie reels from the 1910s and 1920s was unearthed at a construction site in Dawson City, a remote mining town in northern Canada. All of it was literally preserved in permafrost. Filmmaker Bill Morrison, with the help of local archivists, sorted through the half-million feet of recovered celluloid to create this amazing documentary. Among the jewels are scenes from some lost Douglas Fairbanks and Lon Chaney films, and a newsreel of a controversial play from the 1919 Chicago “Black Sox” World Series. To his credit, Morrison uses his material for more than mere spectacle, introducing us to fascinating characters and forgotten stories of a bygone era (including Donald Trump’s grandfather Frederick, who built his wealth with a wildly successful bar and brothel back in the day). Special note should be made of the terrific score, composed by Alex Somers, a frequent collaborator with Icelandic band Sigur Rós.

The Road Movie (In Theaters)
Dashboard cameras haven’t been widely adopted here, but are ubiquitous in Russia. YouTube is full of some of the wildest footage captured by these unblinking, unmoving eyes: forests aflame, vehicles colliding, fearsome acts of man and nature. Filmmaker Dmitrii Kalashnikov sorted through more than 1,300 YouTube clips to find the best of the best, assembling them into one of the most unusual documentaries of the last few years. The Road Movie is structured around the seasons, starting and ending in icy winter, but moment to moment, you never know what the next clip will bring. Whether it’s comedy or tragedy, sadness or spectacle, the only thing you can be sure of is that what you’re seeing — and hearing, in the subtitled, unguarded remarks of drivers and passengers — is real. There’s a voyeuristic pleasure to be had in watching what, in some cases, are likely the weirdest or worst days of someone’s life. You’ll know within the first five minutes if The Road Movie suits your taste. One thing’s for sure: once you see a bear in full gallop racing down a highway, you may rethink your road trip across Russia.

PS. These directors are still working, well into their 80s. And this recent doc sheds light on “Shadowman,” one of the leading “street artists” of New York’s downtown scene.

Photo of Jim Carrey from Jim & Andy courtesy of Netflix.

0 comments on “3 Documentary Finds Based on Found Footage”