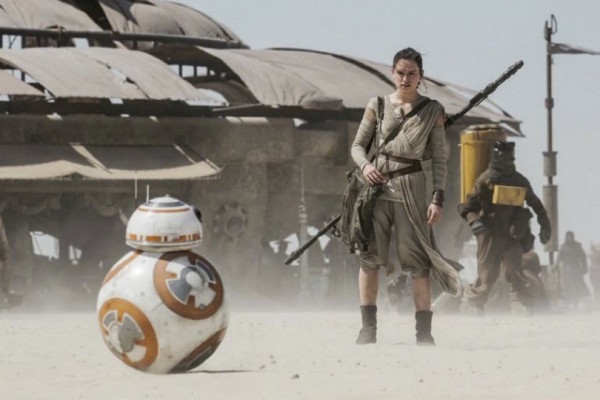 Star Wars is back, and I couldn’t be happier. Episode VII: The Force Awakens exceeded all of my expectations and then some (though the prequels certainly didn’t set the highest bar).  I won’t write a traditional review here – there are plenty of those around.  And I won’t give away any spoilers. But I will share why I think this new incarnation of Star Wars is a gift to true fans and new fans alike. It’s all about going back to basics. The Force Awakens has all of the elements that made the original trilogy so special.  There is humor and love, good versus evil and of course, lightsabers.  Let’s start with the humor.  This wasn’t the forced, silly humor of Jar Jar Binks.  Throughout the movie, there were genuine laughs from the audience, many coming courtesy of newcomer John Boyega as Finn. Harrison Ford also brought back Han Solo’s wry sense of humor. One line that stuck out – “Escape now, hug later.”

There were also the seeds of love planted in this film, just as Han and Leia’s relationship began to percolate in A New Hope. I won’t say too much, but Boyega and fellow newcomer Daisy Ridley as Rey both shine. I’m looking forward to seeing where their story leads. There was also love between human and droid.  BB-8 will surely be in everyone’s vocabulary now, as R2-D2 and C-3PO were before.

The struggle between good versus evil is far from over in The Force Awakens (a little art imitating life these days, unfortunately). The names are changed (the Empire is now the First Order), but the themes are the same. Light versus dark, right versus wrong, the small Resistance fighting the good fight against numbers much greater than their own. It may be repetitive, but it still works.

Of course, no Star Wars movie would be complete without some lightsaber duels. This installment had plenty of action sequences with blasters and lightsabers (they are still so cool).  And, as the title suggests, the Force plays a pretty big role in the film. But while the special effects were certainly impressive, they weren’t the focal point as I felt was the case in the prequels. The scenes seemed more realistic and more natural.

The one other beauty of Episode VII was the way it mixed the old with the new.  Director J.J. Abrams did a masterful job. There were so many references and allusions to the original trilogy, I’m sure I missed a ton! But it was great to see new characters with established ones (applause erupted each time a familiar character graced the screen) and the stories of old carried on and expanded.

I’d be remiss if I didn’t mention the amazing music throughout the film. John Williams is a genius and Star Wars wouldn’t be the same without his brilliant soundtracks.

As soon as I saw the words “A long time ago in a galaxy far, far away” and the powerful main theme began to play, I was flooded with memories of the original movies and how much I adore them (I actually got teary-eyed). The characters, the adventure, the world that George Lucas created was like nothing I’d ever experienced before. I loved being along for the journey, and now that joy has returned.

The Force Awakens has the potential to become a classic, same as Episodes IV, V, and VI.  It is certainly a force to be reckoned with.

1 comment on “A Little Film You May Not Have Noticed”