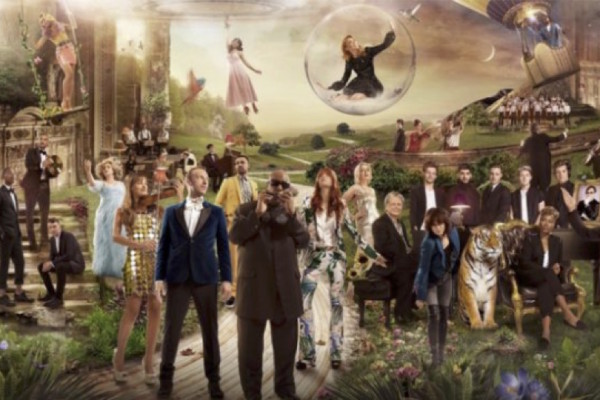 Let’s start at the beginning. “God Only Knows,” about to celebrate its 50th anniversary, is one of the most beautiful records of the of the 20th century. Written by Brian Wilson and Tony Asher, and featured on the Beach Boys’ masterpiece, Pet Sounds, it helped redefine pop music. Everything about it is sublime: the lovely melody; the elegant lyrics; Wilson’s groundbreaking arrangement (which, among other things, helped inspire Sgt. Pepper); and – of course – the mindblowing musicianship of The Wrecking Crew.

It is no surprise, then, that the BBC chose to re-imagine the song to launch its new music service last year. That may be the only unsurprising thing about the staggeringly inventive video that accompanies the song. No need to say too much about it here, since it more than speaks for itself. It begins innocently enough, with a lovely orchestral intro. But when a tuxedo-ed Pharrell Williams strides down a stairway to kick off the vocals, things take a turn.

There are too many head-turning, multi-generational cameos to mention, which is one of the reasons you’ll want to watch several times. From Lorde in angel wings to the angelic Mr. Wilson himself, dinged-by-life but still ethereal, the twists and visual treats just keep coming…

You’ll likely enjoy the “making of” featurette, too, since this was obviously a very complex undertaking.

For purists, the original 1966 video is a kick.

And while we’re on the subject, you may also appreciate our recent posts on The Wrecking Crew and Chrissie Hynde (one of the cameos). Lastly, be sure to check out Love and Mercy, 2015’s feature film depicting Brian Wilson’s genius and struggles.

As with any masterpiece, there are many facets to admire. So get started!

2 comments on “Bet You Can’t Watch Just Once”