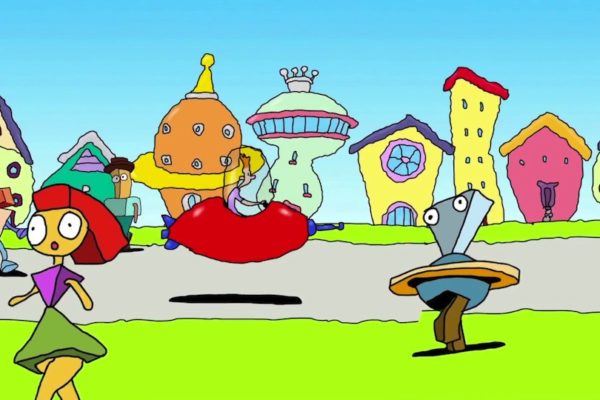 What do animator Bill Plympton and singer-songwriter Jackie Greene have in common? Well, they’re both devoted to exploring the complexities of the human condition in their individual art forms. The two also came together for a music video for Greene’s new song “Modern Lives” — which is being screened at NYC’s SVA Theatre on Mar. 28 as part of an evening of musical shorts by Plympton (including his work with Madonna, Weird Al, and Kanye West). Since Greene will be performing live at the event, we took this opportunity beforehand to check in with both artists about their recent collaboration.

Q: SVA in NYC is going to be screening an evening of Bill Plympton music videos. Is there one in particular that you’re eager to see on a big screen?

Jackie Greene: I’m excited to see anything and everything that gets shown. I’m a fan of the medium and I think Bill’s work is fantastic.

Bill Plympton: I think the short “Tupelo” is the one I’m most excited about because it’s a more subtle music video, and there’s a lot of detail in it that’s difficult to see on a small computer screen.

Q: The recent music video for “Modern Lives” visually and sonically calls to mind a youthful road trip (with a sci-fi twist). Do you have a particularly memorable road trip you took when you were younger?

BP: The first cross-country road trip I took in 1972. It was with two strange guys who also needed to travel from New York to Oregon. The problem was the driver was very drowsy and I fell asleep and drove off the road — we rolled three times — but I survived with no injuries. The other guys went to the hospital, and I took a bus for the rest of the trip.

JG: One of my first tours was opening up for B.B. King. It was just me and my tour manager Ben, who was basically my best friend from high school. Anyway, Ben and I followed B.B. King all summer in a rented Subaru. Pretty sure the A.C. was shot. Sometimes the drives between shows were over ten hours. I’d have to get up there and play to an audience that doesn’t necessarily give a shit about me and try and convince them to go to the merch table and pick up my debut CD. I think we used to get like, 200 bucks a night, or so. Somehow, we made that work, even if involved pulling over and sleeping in the car. The cheapest motel we could find was often still too expensive…

Q: What’s your favorite music video of all time?

JG: If I answer honestly, I’d probably have to say “Devil Inside” by INXS. Mainly because I was obsessed with that song when I was a kid. For pure epic ridiculousness, I’d say “November Rain.” I mean come on — Slash doing yoga poses, mid-solo, in the middle of a desert? In front of an abandoned church?? That shit is epic. There’s not a rock and roll guitar player on earth that doesn’t know that scene.

BP: My favorite music video is actually an extended music video. It’s The Beatles’ “Yellow Submarine” — What a perfect union of great imagery by Heinz Edelmann and great music by The Beatles.

Q: If you two were to collaborate again on a music video that was based on a classic rock track, what might that song be?

BP: I would love to do something for The Eagles’ “Hotel California” and I’d love to see what Jackie could do with that song.

JG: Something psychedelic would be great. Maybe something off of Anthem of the Sun… It’d be cool to try to write music for an animated feature-length at some point.

Q: Jackie, was there a specific animated work by Plympton that made you want to collaborate with him on this music video?

JG: I’ve been a fan of Bill’s for awhile, so probably not one work, in particular. “The Date” is pretty damn funny. “Footprints” is very thought-provoking and symbolic. “The Kiss” is hilarious and works really well all stripped down and without much color. I really like Bill’s style and the subtle shifts within his style. It’s like peeking into a very active and unpredictable imagination.

Q: Bill, You’ve done a handful of music videos in the past: Parson Brown’s “Mexican Standoff,” Kanye West’s “Heard ‘Em Say,” and Weird Al’s “TMZ”. What was it about “Modern Lives” that inspired you?

BP: I’ve turned down a lot of music video offers so what attracted me to his music was the blend of old-time blues and modern poetic lyrics. I was interested in this kind of format. It’s really rare to find a 30-minute long music video. It brings to mind Pink Floyd‘s The Wall which is very political and powerful, but I prefer the music of Jackie and I feel so lucky I was able to be a part of the project.

PS. Going to be in NYC on Mar. 28? Get tickets to the Bill Plympton Music Video Extravaganza at SVA.