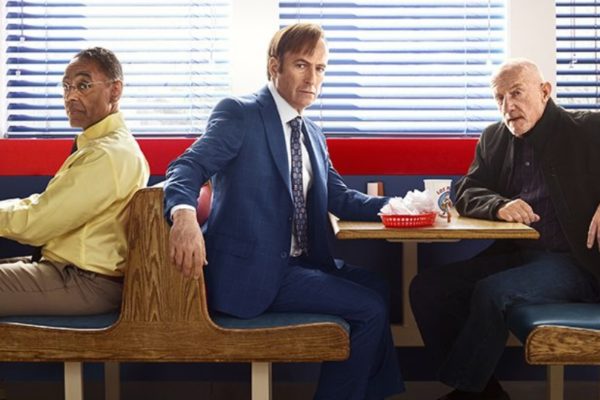 Breaking Bad fans or “Baddicts” as they liked to call themselves have been getting an unexpectedly rich experience from its fun romp of a spin-off Better Call Saul which, now in its third season, continues to reveal just how the lovable scamp Jimmy McGill (Bob Odenkirk) became the amoral lawyer Saul Goodman. As in earlier seasons, Jimmy is still trying to make things right for his partner in the law and in life Kim Wexler (an underrated Rhea Seehorn), but the rivalries and the accompanying vendettas grow more intense with each passing season. A prequel that’s must-see TV? It happened on AMC. And contrary to what you might expect, the show has done this by constantly playing up associations with the original material instead of moving away from it. For example…

The Downward Slide
Jimmy’s older brother Chuck (Michael McKean) betrayed him in the past so when Jimmy helps Kim land a big client behind his brother’s back, retribution comes with a cost. In fact, the elder sibling is dead-set on justice, Jimmy’s career be damned. And every subsequent well-meaning move gone wrong, every shortcut that’s morally compromised contributes to our understanding of how a good-hearted schmuck like Jimmy became a corrupt narcissist like Saul.

Breaking Bad Cameos
Jonathan Banks’ Mike Ehrmantraut has been with the show from the start with his own nefarious business dealings. Baddicts also have had the pleasure of witnessing Saul’s meeting with Gus (Giancarlo Esposito) and the resurfacing of familiar faces like former henchman Victor (Jeremiah Bitsui), crazed drug dealer Tuco Salamanca (Raymond Cruz), and a much less twitchy corporate crook Lydia (Laura Fraser). Hardcore devotees may also recognize Francesca (Tina Parker) and Huell (Lavell Crawford). Spotting these crossovers just adds to the fun.

The Hector Vs. Gus Fring Backstory
Better Call Saul gives a rewarding backstory on Breaking Bad’s rivalry between Hector “Tio” Salamanca (Mark Margolis) and Gus Fring. Anyone else notice that that Nacho (Michael Mando), one of Hector’s right hand men, is the same guy Mike hires later to get rid of Tuco? Throughout this prequel, we see Gus playing a high-stakes game of chess with real-life losses. Is Gus responsible for Hector ending up paralyzed in that infamous wheelchair?  We can only hope so!

Jimmy Takes on TV
Jimmy has to hustle too after being handed a 12-month suspension for unethical behavior by the New Mexico Bar Association. Since he’s previously had great success with his own TV ads (who can forget the ones on Breaking Bad), he figures he can off the pre-paid air time by producing commercials for local business owners. His manic used-car salesman shtick is both pathetic and hysterical while his mandated community service (which includes picking up garbage) makes for some seriously kooky shenanigans. It’s also a nice way to honor one of the funnier bits we saw of Saul on the original show.

The Carryover Crew
Alongside producer-creators Vince Gilligan and Peter Gould, the writers’ room has had a good share of Breaking Bad alum including Gordon Smith, Thomas Schnauz, and Gennifer Hutchison. That goes for the music department too with composer Dave Porter and music supervisor Thomas Golubic. Film editors Kelley Dixon and Skip McDonald also traveled from one show to the next as have producers Melissa Bernstein and Mark Johnson. And that’s just skimming the surface. In short, the pedigree has been solid from the beginning ensuring this series never took the easy road. It had talent it knew it could trust behind as well as in front of the camera.