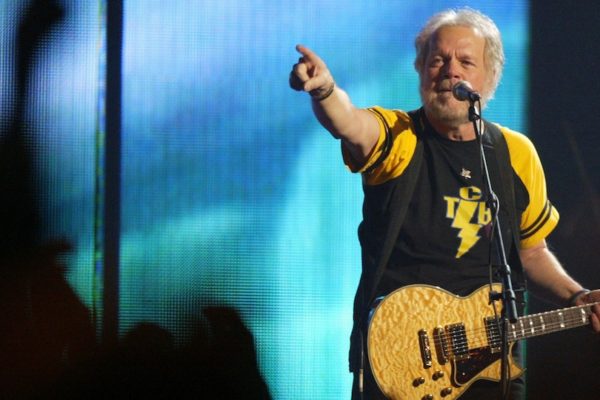 I’ve been listening to all the number one hits from Billboard’s Hot 100, starting with 1955’s “Rock Around the Clock” (the quasi-“official” beginning of the Rock Era). Along the way, I’ve scored each song from “1” to “10” in four guitar-centric categories: riffage, rhythm playing, fills, and solos. In a previous article, we looked at guitar trends among those 388 songs. Now let’s take a deeper dive and look at the outliers: the Number One hits that give us what exactly we desire most in life—guitar and lots of it! (Please note: all scores were assigned solely by the author.)

The Magnificent Seven
These seven songs — just shy of 2% of the total surveyed — are the only ones to achieve a Guitar Score of 30 or more (out of a possible 40). Feast your ears! Full marks here for Roger McGuinn and the Byrds, who broke the 30 barrier a full four years before anyone else; the arrangement and tone of McGuinn’s 12-string Rickenbacker remain breathtaking to this day. Randy Bachman of the Guess Who (“American Woman”) and Steve Miller (“The Joker”) both rack up gaudy “37s” thanks to both layering guitars on top of guitars and fantastic phrasing and arranging (with some killer tones to boot).

The Fantastic Four
These four songs feature the crème de la crème of Number One hit guitar solos, each scoring a perfect “ten.” Danny Cedrone set the gold standard in “Rock Around the Clock.” Santo Farina played a steel guitar to create a gorgeous and otherworldly solo on “Sleep Walk.” Randy Bachman basically went bananas with tone, feel and attitude on “American Woman,” and Red Shea colored “Sundown” with an understated, almost subliminal solo that serves the song to perfection.

Nearly as impressive, we have three songs with solos — by Keith Richards, George Harrison and Steve Miller — that scored “nines.” These solos were great but fell just short of my “Supreme Musical Achievement” standard for scoring a “ten.” (Fortunately, I know I won’t get a lot of pushback on this topic since guitar players generally agree on everything, right?)

The Super Seventeen
Some riffs are single-note; others are chord-based. Some are clean; some are fuzzed-out. Some occur only at the song’s beginning; others continue throughout. What the riffs below all share is priceless: instant recognition of the song being played. Here are the 17 songs that scored a perfect “ten” for riffage.