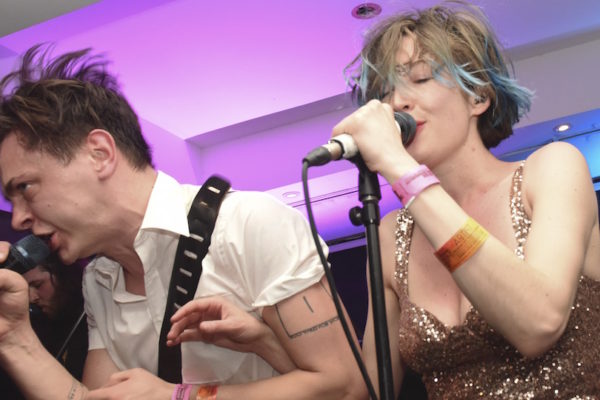 Canadian musicians have always ranked highly with me. Hell, some of my favorite acts are Canadians: Joni Mitchell, Neil Young, and Leonard Cohen come to mind, as do lesser-known artists like A.C. Newman and the Broken Social [amazon template=right aligned image&asin=B078TQJRRV]Scene. I’m guessing that the reason there’s never been a “Canadian Invasion”  (you know, like the British one?) is that they’ve always sort of been part of our scene. With that in mind, here are two Canadian acts who have achieved acclaim up North that deserve to be celebrated far and wide – including here in the US of A. Give them a listen and see if you agree.

July Talk
Last year at Artpark, a performing arts venue near Niagara Falls, I went to a July Talk concert, in search of nothing more than a general feel-good groove. Two songs into the third band’s set, something happened: the bluesy skronk of the band’s “Summer Dress” wormed its way into my brain, just as the hypnotic drum beat and erotic chemistry between singers Peter Dreimanis and Leah Fay seduced the rest of me. As the group churned through infectious songs like “Guns & Ammunition” and “Beck & Call,” all I could think about was: Where had I seen her before? A quick google provided the answer: Leah Fay Goldstein — as she was billed — stars in the quirky 2015 indie flick Diamond Tongues; she landed the role shortly after that film’s co-directors caught July Talk at a TIFF party in the band’s native Toronto. (Interestingly, Dreimanis signed on as DiamondTongues’ cinematographer). Seeing her tickle and taunt and tease that night at Artpark, I totally understood why her performance could work as an effective audition. For while everyone else in July Talk plays with a desperate intensity, Goldstein holds the stage as if she were assuming a major role in every one of our lives.

Patrick Watson
My history with Patrick Watson goes even further back. Several summers ago, I hopped in my car and drove 300-plus miles to Burlington, Vermont — ostensibly to escape the oppressive heat of NYC and drink some craft beer in cooler climes. Truth be told, I’d made the trek with one goal in mind: to see this Montreal native perform at the promisingly named WSYWIG Festival. Watson had become my obsession, and no expanse of highway could keep me from him. I’d stumbled on his music a few months earlier when a Soundcloud listener told me that my songs sounded like his. Beyond flattered, I spent the next few weeks in a Watsonian K-hole. I  played his transcendent “Lighthouse” on a loop, and told friends and family that the song was a “beacon of hope in a bleak world.” When I got to the concert, it was clear that more than a few in the front row were equally hip to his charms. I don’t remember all the songs that were played that night — “Lighthouse,” “Quiet Crowd” and “Step Out For a While” were certainly among them — but when the power went out towards the end of their set, the band simply shrugged and switched to acoustic thereby making lemons into lemonade. In the process, Watson and company brought a somewhat scattered festival crowd even closer to the stage, as if we were huddling around a campfire to hear a few friends share intimate reminisces. Who wouldn’t want to be in on his secret?