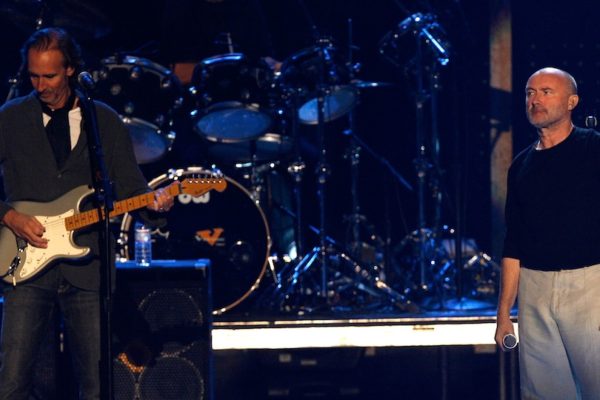 What’s most striking about Genesis’ 1976 album A Trick of the Tail is how comfortable Phil Collins sounds as their lead singer. For someone who by all accounts was very reluctant to step into that role, his performance is supremely confident. Whatever one’s opinions about post-Abacab Genesis or Collins’ solo work, four decades of perspective have rendered the idea that his aptitude as a frontman was ever in doubt rather alien. Both that perception and the underlying reality owe a great deal to this particular album, whose content and reception set the stage for the band’s future popularity.

Though 1978’s album And Then There Were Three and the hit single “Follow You Follow Me” are generally viewed as the band’s turning point, A Trick of the Tail was actually their first album to reach the Top 40 in the US. Some of this was likely a carry-over from the years spent building their reputation and audience with Peter Gabriel as the lead singer. Their final album with Gabriel, The Lamb Lies Down on Broadway, remains popular among fans and itself just missed the top 40 the year before. At the time, however, the departure of such a distinctive lead-singer had many predicting the band’s collapse.

The remaining quartet of Collins, keyboardist Tony Banks, and guitarists Mike Rutherford and Steve Hackett spent much of 1975 looking for a new lead singer in what Collins described as “a leisurely manner.” In addition to fielding demos from unknown singers, the group was even approached by Todd Rundgren. Despite his obvious talent and the prog-rock leanings later displayed with the band Utopia, it’s hard to imagine the musically restless Rundgren having been a good long-term — or even short-term — fit.

Yes‘ recruitment of Trevor Horn and Geoff Downes from the Buggles to replace Jon Anderson and Rick Wakeman for their 1980 album Drama serves as a retrospective cautionary tale: it shows how wise Genesis was to draw from within the group rather than attempt to assimilate an outside ego and musical sensibility. Even when touring necessitated hiring another drummer, the band picked someone who described Collins as a “soul mate” in the form of Yes veteran Bill Bruford.

Of course, this would all be beside the point if the music that came out of this period weren’t worthwhile. With only two songs credited to the entire group and two to Banks individually, the songwriting credits on A Trick of the Tail are more fragmented than its predecessor where all songs were credited to the five members. However, they reflect the band’s overall personality better than the prior album’s stricter demarcation between Gabriel (lyrics )and the other four (writing the music). It’s also noteworthy that despite the individual songs generally being longer than those on The Lamb Lies Down On Broadway, this later record feels much better paced.

The standout — and arguably the one that most clearly pointed to their future — is the title song. The only song on the album that runs less than six-minutes, its mix of jaunty melody and literature-inspired lyrics makes it a textbook example of accessible progressive rock. As such it points the way to later favorites like “Home by the Sea” and the title song from Abacab. In a similar vein, “Entangled” foreshadows intricate ballads to come while “Robbery, Assault and Battery” establishes Collins’ ability to handle character-based work.

In broader pop-music terms, Collins’ later solo success makes his emergence as a singer A Trick of the Tail’s most obvious triumph. Looking at the album itself, though, the real achievement belongs to Tony Banks, sole writer of the title song and the only member to contribute to every tune. In a later interview, Banks encapsulated the appeal of the album by saying, “I think people who had found Peter a bit difficult maybe preferred the album because it was a little bit less dense.”

A decade or so later, their efforts to balance progressive and pop would hit a platinum-lined dead-end. Middle-of-the-road (and often unimaginative) work in both solo and group projects has somewhat obscured how successfully Genesis negotiated a creative path between those approaches. Anyone wanting to appreciate that journey would do well to start with A Trick of the Tail

2 comments on “Genesis’ Turning Point: “A Trick of the Tail””