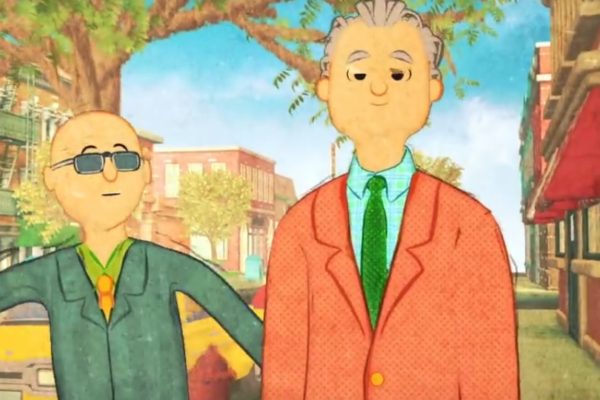 A delightful animated short has recently surfaced pairing ‘70s late night legends Bill Murray and Paul Shaffer. You might wonder: What do Saturday Night Live‘s most elusive alum and David Letterman’s smart-aleck bandleader have in common? Well, as it turns out, a few things. To start, Canadian-born Shaffer, who was once the musical director of a Toronto production of Godspell starring some future SNL vets, helmed the house band for a “new” sketch comedy show called Saturday Night Live which Murray joined shortly thereafter. Then, once they were both on board, the two made magic when Shaffer memorably accompanied Murray for a recurring character, Nick the Lounge Singer. A bond was formed.

[amazon template=right aligned image&asin=B01MY4O98A]Coincidentally or not, both left the show in 1980: Murray went on to do Tootsie, Stripes, and Groundhog Day; Shaffer went on to lead “The World’s Most Dangerous Band” for David Letterman. (We’re guessing Bill also helped Paul land that bit part in Scrooged!) Now, their careers converge again. At the start of Jay Marks’ Yellow Submarine-style romp “Happy Street,” Paul tries to catch up with Bill who’s briskly walking around town. Singing as he goes, Bill sounds as smooth as ever; his voice bearing the supernatural power to make the residents of Happy Street overlook any threat of danger, the pain of a bike accident, or the filth of a roach-infested bar. As the swinging tune progresses, everyone from cops to graffiti artists to stray dogs join in for a lyrical fantasy with no room for negatives. Hey, life’s all about your attitude, right?

The music video has the added benefit of being riddled with Easter eggs that reference Bill Murray films like Ghostbusters, Scrooged, and Caddyshack, and Shaffer career highlights like his gigs with Letterman and The CBS Orchestra. There are also nods to their other achievements of course, but you’ll have to watch the short and figure out the rest on your own.

“Happy Street” is the first release from the new self-titled LP by Paul and “The World’s Most Dangerous Band.” The album also features guest appearances from Dion, Darius Rucker, Shaggy, and Valerie Simpson.

PS. For some other fun music videos that you’ll definitely be watching more than once, check out our post on the group OK Go and our post on the re-imagined version of “God Only Knows.”