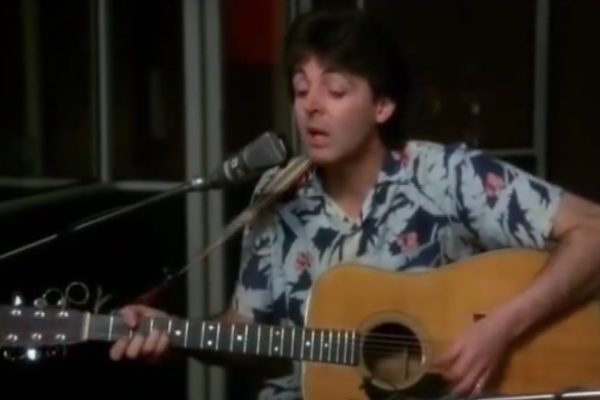 Paul McCartney’s 1984 film Give My Regards to Broad Street is mainly remembered as a bomb, the title alone generating eye-rolls from even the most die-hard Beatles and McCartney fans. Released alongside Prince’s Purple Rain and Talking Heads’ Stop Making Sense, the movie faced strong competition. But three decades later, the top-notch McCartney score and bold MTV-era visuals of Broad Street deserve a second look. In truth, for all its faults, the film looks, sounds, and feels a thousand times better than Let It Be, the semi-documentary of The Beatles’ 1969 recording sessions.

The plot seemed intriguing enough. An ex-con named Harry (Ian Hastings) has just been released from prison, and Paul (playing himself) gives him a job as a chance to turn his life around. One of Harry’s first tasks is to deliver the master tapes for Paul’s new album to the record company. But the next morning, Harry has disappeared with the tapes, and everyone assumes he has fled the country to bootleg them. As Paul goes about a “day in the life” of a pop superstar – recording session, video shoots, band rehearsal, a BBC radio spot – he is trailed by a pair of bumbling police inspectors trying to crack the case, as well as evil bankers looking to turn the crime into an opportunity for a corporate takeover.

A seasoned co-writer might have elevated this story into something on par with Help! or A Hard Day’s Night, but McCartney insisted on writing the screenplay himself. This made Broad Street the cinematic equivalent of his more indulgent musical efforts, such as Ram or McCartney II, which isn’t altogether a bad thing. Today’s hipsters celebrate the indie spirit and unique charm of those LPs, even if they were, like Broad Street, unappreciated in their time.

Fortunately, George Martin produced the Broad Street soundtrack, and it ranks as one of McCartney’s finest solo works. It’s a satisfying mix of Beatles and solo McCartney remakes, faithful to the originals but respectfully modernized. I’ll go on record as saying that the ’84 version of “The Long And Winding Road” is better than the original, with its tasteful orchestration and a tight rhythm section pocket from UK studio vets Dave Mattacks and Herbie Flowers. Of the film’s three new songs, “No More Lonely Nights” is an undisputed gem featuring some soaring guitar playing by Pink Floyd’s David Gilmour.

It’s not surprising that the music saves Broad Street; McCartney insisted on performing all of the songs live on camera, and it gives the film an irresistible energy. Key moments like Chris Spedding’s guitar solos and the french horn line on “For No One” receive the camera’s full attention. In the recording session scene, with Ringo on drums and Martin behind the glass, director Peter Webb artfully pans across mixing consoles, tape decks, and compressors with lights blinking in time to the drums, transforming studio gear into objets d’art! This strong relationship between music and image make the film a prime artifact of the early days of music video.

We also gain unexpected insight into Paul’s unique mind. In Barry Miles’ rich McCartney biography Many Years From Now, the author describes how Paul’s creativity is often fueled by vivid memories of ordinary people, places, and things. Knowing this, the seemingly random elements in Broad Street make perfect sense. A BBC radio interviewer is smooth and refined on air, then mutters “What a load of cobblers!” when his mic is off. An old man demands an autograph at the studio gate with the remark “My wife likes your music…I don’t!” We see the world through McCartney’s eyes.

Additionally, the on-screen McCartney still abides by the outlaw, “band on the run” code of the ‘60s and ‘70s. He may be a 42-year-old multimillionaire, but he implicitly trusts an ex-con, seeks the friendly counsel of a local crime boss, and isn’t afraid to show a roadie rolling a joint! The unexpected failure of Broad Street was a bitter blow to McCartney, but by the late ‘80s he would recover with strong new music and a triumphant world tour. Give My Regards to Broad Street is not a perfect film, but its reputation as a total cinematic disaster is undeserved. Enjoy it for what it is – a McCartney-fueled, 100-minute long form music video – and you might discover some unexpected treats.

PS. Speaking of Beatles movies and books, we cover more of them in our posts Rock On! Five Films by the Fab Four and Since You’ve Already Heard The Beatles, Read Them. Plus, you may also enjoy our post on McCartney’s Ram here.