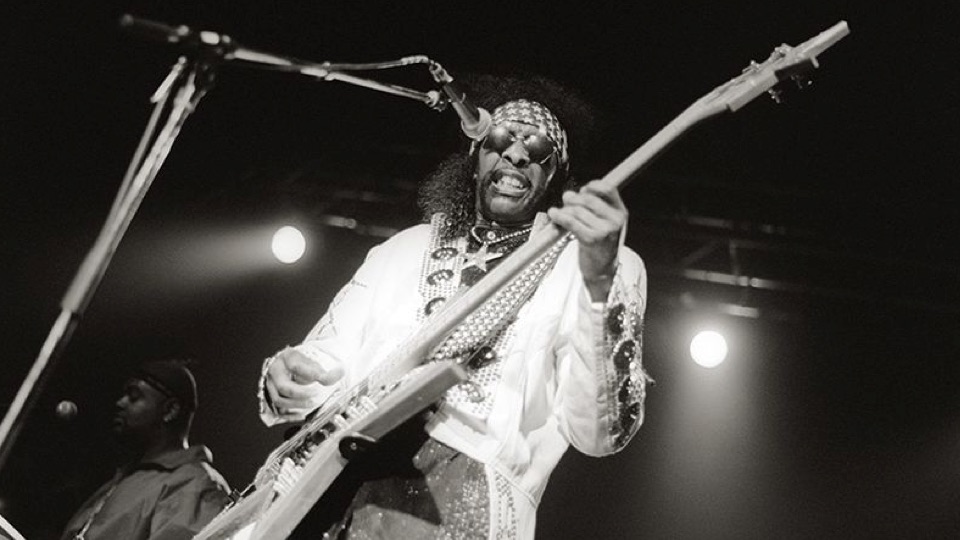 In the early part of 1971, William “Bootsy” Collins, his brother “Catfish,” and drummer Frank Waddy found themselves facing an uncertain future. They previously spent a little more than a year backing up the Godfather Of Soul, Mr. James Brown, not only driving the grooves of some of Mr. Brown’s most memorable hits (“Sex Machine,” “Super Bad,” “Soul Power,” etc..) but also traveling the world as members of the JB’s traversing from Harlem to various parts of Europe and then to Africa. Their sights were set on forming a new band that reflected the influence of their experience with Mr. Dynamite, while also looking sideways at Jimi Hendrix and his Band Of Gypsys and a “Bitches Brew” defined Miles Davis.

For the next couple of years, under the titles of the House Guests, Complete Strangers, and Bootsy Phelps & Gary, the Collins brothers and crew would work towards cultivating their own brand of Funk. They would record 9 tracks (four that were previously unreleased) before embarking on a new musical journey with George Clinton and Parliament-Funkadelic. In 2019, through a deal with the Cincinnati-based record store Shake It Records, all tracks have been released on the vinyl collection My Mind Set Me Free. Here are some of the choicest cuts:

“MY MIND SET ME FREE”

Many of the tracks featured on this overdue collection feature horn and bass guitar arrangements that would be reused on tracks by Bootsy’s Rubber Band and Parliament. This high-energy Funk scorcher features lead vocalist Rufus Allen embracing the virtues of mind expansion. The horn break from this track would later be used in the Bootsy’s Rubber Band classic Another Point Of View.

“WHAT SO NEVER TO DANCE”

George Clinton once coined the phrase “Hyperventilating Grooving,” which describes every ounce of this particular track and also features lead vocals by Rufus Allen. The horn arrangement would later reappear on the Rubber Band track called “Psychoticbumpschool.”

The only cut on this album not presented as one seamless track, “Fun In Your Thang” features lead vocals by Bootsy Collins with Rufus Allen lending strong support.

Released in 1973, Gary “Mud Bone” Cooper handles the vocals and drums on a jam that can only be described as Gutbucket Funk. This would be the only jam to be remade in its entirety when it was featured on the 1975 Parliament album Chocolate City under the abbreviated title “Together.”

The last recording made before their return to the P-Funk organization is once again fronted by vocalist Gary “Mud Bone” Cooper. Previously unreleased.

Many of these foundation-based tracks were reconfigured into classic wipeout music featured on albums by Bootsy’s Rubber Band and Parliament. Because of local distribution, these tracks are rare Funk gems that were extremely hard to find even for hardcore Funkateers. What we have here is an exquisite collection of tracks that represent a key period in the development of the Cincinnati-wing of the P-Funk Mob, jams that go a long way in putting some Fun In Your Thang!

1 comment on “Bootsy Collins and “My Mind Set Me Free””