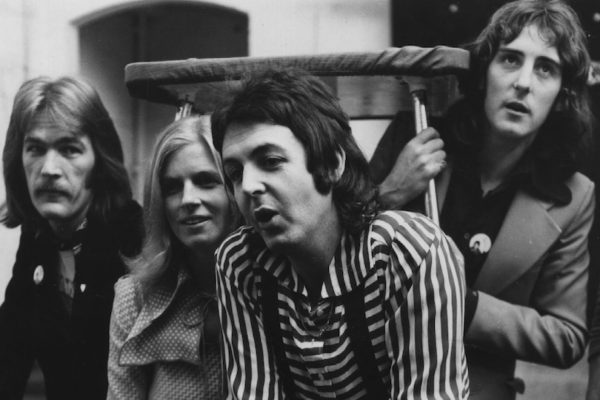 After the cessation of the world’s greatest band of all time, Paul McCartney was eager to work on solo projects of his own. After quickly turning out two legendary albums (McCartney and Ram) with the help of his wife Linda, Paul decided it would be a good idea to form a group that was the antithesis of the Beatles: a raw stripped-down rock n’ roll band. As time wore on, Wings evolved into one of the biggest pop bands of the ‘70s thereby becoming what is arguably the most consistent project of any Beatles solo career. Through the years the groups underwent several lineup changes revolving around the core of Paul, Linda, and former Moody Blues guitarist Denny Laine. A total of eight albums were released from 1971 to 1979. Here’s how they rank.

8. Wild Life (1971)
On the first Wings album, the new group were finding their groove and in search of their identity. Wild Life served as a jumping board to help complement the Wings Over Europe Tour, in which McCartney and company roamed the Continent in a customized double-decker bus then show up at the music hall of their choosing to perform that very night. The sound was a departure from what distinguished The Beatles and provided a mix of folk and rock. To best capture that unrefined sound, over half the album’s songs were recorded in one take. A mixed reception didn’t stop this LP from reaching the top 10 on the US charts. Highlights: “Tomorrow,” “Some People Never Know,” “Dear Friend”

7. Back to the Egg (1979)
Wings released their last album in 1979 then officially dissolved two years later. With its fifth lineup change in eight years, the group tried to keep things fresh by releasing a progressive sound that evidenced a New Wave influence. Back to the Egg also served as a soundtrack for an experimental half-hour TV special, largely composed of music videos. The recording process also proved historic as the Grammy-winning instrumental “Rockestra Theme” featured a mega lineup including Pete Townshend, David Gilmour, John Bonham, and John Paul Jones among others. Highlights: “Rockestra Theme,” “Getting Closer,” “After The Ball/Million Miles”

6. London Town (1978)
In an unprecedented move, Wings decided to take to the high seas to record 1978’s London Town: they rented multiple yachts and spent a few months floating near the US Virgin Islands. The seafaring lifestyle certainly had an effect as half the tunes veer towards nautical themes. (The other half strays towards synthesizers.) Sales failed to match those of the previous album Wings at the Speed of Sound but did include a future Michael Jackson hit via “Girlfriend”. Highlights: “With a Little Luck,” “I’m Carrying,” “Morse Moose and The Grey Goose”

5 Wings Over America (1976)
America’s bicentennial marked the first time that Macca was performing live in the USA since Candlestick Park a decade before. The accompanying tour — aptly titled “Wings Over the World” — proved to be one of the largest tours in history, setting the world attendance record even with almost a quarter of the tour left to play. The three-LP set still impresses as a fantastic collection of live performances. Footage of that tour was compiled into the rockumentary Rockshow which also has aged very well. Highlights: “Maybe I’m Amazed,” “Live and Let Die,” “Go Now”

4. Wings at the Speed of Sound (1976)
WatSoS is easily the band’s most commercial-friendly album as McCartney opted for a different creative process by encouraging every member of the band to take lead vocals on a song. The album spent several weeks in the number one slot in the U.S. and was the fourth best-selling album of 1976. The breakout hit “Silly Love Songs” was number one in the USA, Ireland, and Canada and has since been covered by everyone from Shirley Bassey to Nicole Kidman and Ewan McGregor (Moulin Rouge!). Highlights: “Silly Love Songs,” “She’s My Baby,” “Warm And Beautiful”

3. Red Rose Speedway (1973)
This album really showcased that Wings was starting to click. As the band’s sophomore offering, it also saw McCartney reeling in the rawness and pushing for more polished production. (Which may be why many consider this their most Beatles-sounding offering.) The LP features a plethora of melodic tunes, one of McCartney’s most poignant love songs, and a fervent medley at the end. The critics may have been lukewarm but hindsight shows Red Rose Speedway to be an extremely underrated release. Highlights: “My Love,” “Big Barn Bed,” “Medley: Hold Me Tight/Lazy Dynamite/Hands of Love/Power Cut”

2. Venus and Mars (1975)
A fresh personnel change that involved the addition of drummer Joe English and guitarist Jimmy McCullouch coupled with the success of Band on the Run led McCartney to feel optimistic about taking his group to new heights. With all eyes on their next move, Wings surprised everybody with a solid 14-song album recorded in New Orleans. The influence of the local jazz/R&B scene certainly seeped into the writing process. It may not quite match Band on the Run but it sure got close. Highlights: “Venus And Mars/Rock Show,” “Listen To What The Man Said,” “Call Me Back Again”

1. Band on the Run (1973)
In truth, McCartney needed to release something great to avoid Wings being written off as a failed project so he packed up the group and headed to… Lagos, Nigeria. The result was released to universal critical acclaim including a Grammy nomination for album of the year. Former Beatles cohort Geoff Emerick picked up a Grammy for his work here on engineering. Every song is worthy of being a single, much of it a perfect balance of pop and rock. Band on the Run is often in contention as best Beatle solo album and widely acknowledged as McCartney’s finest album outside the Beatles. Highlights: “Band on the Run,” “Let Me Roll It,” “Nineteen Hundred Eighty Five”

16 comments on “Paul McCartney & Wings: Which Album’s The Best?”