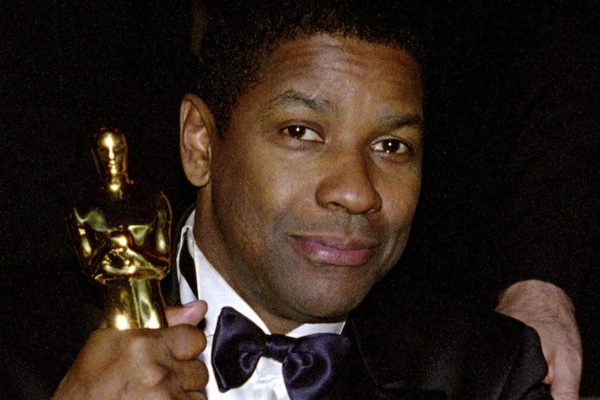 Denzel Washington is irrefutably one of the most talented actors in Hollywood. Bringing an innate charisma and gravitas to every role he’s tackled for over 40 years, he has won two Academy Awards, a Tony, and the Cecil B. DeMille Lifetime Achievement award. A rare talent whose versatility has no bounds, he possesses an unparalleled ability to lend powerful empathy and nuance to each one of his characters. In light of his eighth Oscar nomination for acting this year, we’re ranking his Academy Award-nominated performances in order of merit. Do yourself a favor and make time for a Denzel-marathon as these stellar performances are all timelessly brilliant.

8. Cry Freedom (1987)
For this Richard Attenborough-directed biopic, Washington is South African anti-Apartheid activist Steven Biko whom he portrays as playful, intelligent, and wildly fascinating — all with forceful energy. It’s a shame that halfway through the film the focus changes from Biko to Kevin Kline’s white journalist; it’s safe to say that Washington’s absence in the second half is to the film’s detriment. However, when on screen, Washington surges with dynamism, eclipsing all others in every scene.

7. The Hurricane (1999)
If ever there was a film that demonstrated Washington’s dedication to his craft, it’s certainly this one. The actor shed 60 pounds and put himself through intense training for the role of Rubin “Hurricane” Carter, a middleweight boxer who spent 20 years in prison for a crime he didn’t commit. Although much of the movie takes place in jail, Washington’s towering emotional range is in full display as he experiences hopelessness, desperation, anger, and bewilderment. It’s the heartfelt nature of this performance that rightly earned Denzel his fourth Oscar nomination.

6. Flight (2012)
Now here’s a powerhouse performance! As Whip Whitaker, a pilot whose heroic deeds during a plane crash accidentally end up revealing some uncomfortable truths about his drug and alcohol addiction, Denzel is required to go to some dark places, as Whitaker stumbles deeper and deeper into anger and resentment all while fluctuating between confidence and devastation. To his credit, Washington demonstrates he isn’t afraid to be unlikeable or unsympathetic — a masterful turn done with brilliance few would be able to match.

5. Roman J. Israel, Esq. (2017)
This legal drama, set in LA’s overburdened criminal court system. finds Washington giving one of his best performances as an autistic, idealistic defense attorney who loses himself to the pressures of life-altering events. Awkward and vulnerable, Roman is definitely a change of pace for a performer who is known best for playing strong, domineering men. However, Denzel handles this more soft-spoken role with agility and grace. This one is definitely heart-breaking and deeply affecting.

4. Fences (2016)
Denzel Washington flexed both his directing and acting muscles for his screen-adaptation of August Wilson’s Fences (which co-stars Viola Davis). Washington plays Troy Maxon, a loving yet flawed husband and father in 1950s Pittsburgh, whose personal demons take a heavy toll on his family. Fences is a truly American story of family and disappointment, filled with rich dialogue, which Washington treats with respect and shares with empathy.

3. Glory (1989)
This is the role that launched Denzel into stardom. As the defiant, charismatic “Private Trip” in the first all-African-American regiment in the Civil War, Washington delivers a revelatory performance that won him his first Academy Award. The movie’s infamous whipping scene is one that’s impossible to forget, but it was it’s really Denzel’s raw, sincere intensity that got us excited to see all his roles ahead.

2. Training Day (2001)
Washington’s role here remains one of his most shocking and provocative roles and won him the Oscar for Best Actor. As Alonzo Harris, a corrupt LAPD narcotics officer, Denzel brings rookie cop Ethan Hawke on a 24-hour nightmare mission filled with drugs, gangs, and violence. What was most surprising was, until then, audiences had yet to see the actor play anything but the good guy. Yet in Training Day, Washington seared the screen as an unredeemable, ruthless villain — thereby showing everyone that he was just as capable at being trouble.

1. Malcolm X (1992)
Hailed by both Martin Scorsese and Roger Ebert as one of the ten best films of the 1990s, Malcolm X sees Denzel collaborating with Spike Lee in what can only be described as a political magnum opus. Washington deftly handles his iconic title role with staggering complexity thereby garnering himself a nomination for Best Actor. Al Pacino may have won for Scent of a Woman, but history thinks otherwise as this remains one of the most honest and wonderfully- layered portraits of a historical leader ever brought to life on screen.

PS. Movie lovers have these 2018 films on their “must-see” list.  And when the Grammys meet the Oscars, its magic.

0 comments on “Denzel Washington and the Oscars”