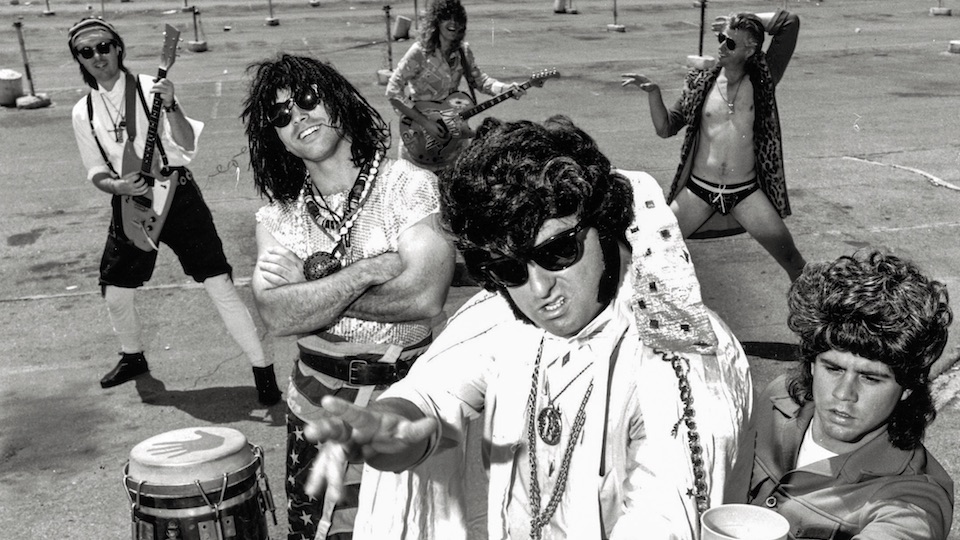 In 1993, grunge had taken hold of the music business. Nirvana, Soundgarden and Pearl Jam ruled the airwaves, and their albums were flying off record store shelves. If you imagined one of the most unlikely acts to ever get regular airplay on MTV or achieve successful album sales during that era, you probably wouldn’t come up with Dread Zeppelin. The band’s unique style featured a blend of Led Zeppelin tunes and reggae music, sung by Tortelvis, a Las Vegas era Elvis impersonator. Sounds like a recipe for rock and roll disaster, doesn’t it? But the band’s offbeat vibe gained them a loyal following in the mid to late 1990s.

Dread Zeppelin grew out of a California rock group called The Prime Movers, who had some minor success in the 1980s. They opened for Thomas Dolby on one of his tours, and also had a song featured on the soundtrack of the Michael Mann film, Manhunter. But Island Records, the band’s label, went through some management changes, and the new regime didn’t offer much support to The Prime Movers, so the group ended up disbanding.

Joseph “Severs” Ramsey, the band’s guitarist and vocalist, came up with the idea of recording Led Zeppelin music in a reggae style, and adopted the alias “Jah Paul Jo,” in honor of John Paul Jones, Led Zeppelin’s bassist. Two other former Prime Movers, Gary Putman (alias “Put Mon”) and Curt Lichter (alias “Cheese”) joined the lineup, along with bassist Carl Haasis (alias “Carl Jah”) and lead singer Tortelvis, forming the nucleus of Dread Zeppelin. The band issued several independent singles that re-imagined Led Zeppelin classics such as “Immigrant Song” with an infusion of reggae, and a healthy side dish of the vocal stylings of The King, courtesy of lead singer Tortelvis.

IRS Records signed the group, and their major-label debut, Un-Led-Ed, was released in 1990. The album sold well, and the band filmed several videos, which were often featured on MTV. The band toured extensively, and their fan base continued to grow, thanks to their enjoyable and often raucous live performances, which showcased the group’s solid musical chops and their quirky sense of humor.

The title of Dread Zeppelin’s second disc, 5,000,000 (*Tortelvis Fans Can’t Be Wrong), was a reference to the Elvis album 50,000,000 Elvis Fans Can’t Be Wrong. The music continued in the vein of the first record, and included the group’s takes on “Stairway To Heaven” and “Misty Mountain Hop.” On this sophomore release, the band also expanded their repertoire to include covers of The Yardbirds “Train Kept A-Rollin’ and Bob Marley’s “Stir It Up,” as well as several original songs. The album was successful, and the group hit the road once again. The band then took a brief hiatus from touring to work on their next record. For the band’s third disc, It’s Not Unusual, the group decided on a change in direction and recorded a collection of disco covers. Several members, including Tortelvis, left the band during the sessions for the album.

The stylistic shift to a disco sound alienated some of the group’s long-time fans, and the record didn’t sell as well as previous releases. On their next disc, 1993’s Hot & Spicy Beanburger, Tortelvis returned to the fold, and the band shifted back to the “Zeppelin meets reggae by way of Elvis” style of their first two records. This time out, the band rambled through Zeppelin classics such as “Going To California” and “Good Times Bad Times,” while also providing covers of “Unchained Melody” and “Good Rockin’ Tonight,” which, ironically, had been recorded by Robert Plant with his side project, The Honeydrippers.

Hot & Spicy Beanburger was well received by the group’s fans, and despite some personnel changes over the years, Dread Zeppelin continues to record and tour on a regular basis. They’ve released a number of studio albums and live recordings, including The Fun Sessions, a collection of classic rock songs reimagined in the band’s inimitable style, as well as a Christmas album, a best-of collection and several DVDs featuring the band’s videos and live performances. The band’s loyal following continues to support them, and fans enjoy the party atmosphere at their live shows. By the way, if you’re wondering what Led Zeppelin thinks of the band, Robert Plant actually stated in interviews that he liked them and dug what they were doing. For a group whose concept seemed like it might quickly run out of steam, Dread Zeppelin has managed to carve out a niche for themselves in the rock and roll world.

1 comment on “Dread Zeppelin: Hammer of the Gods Meets Reggae”