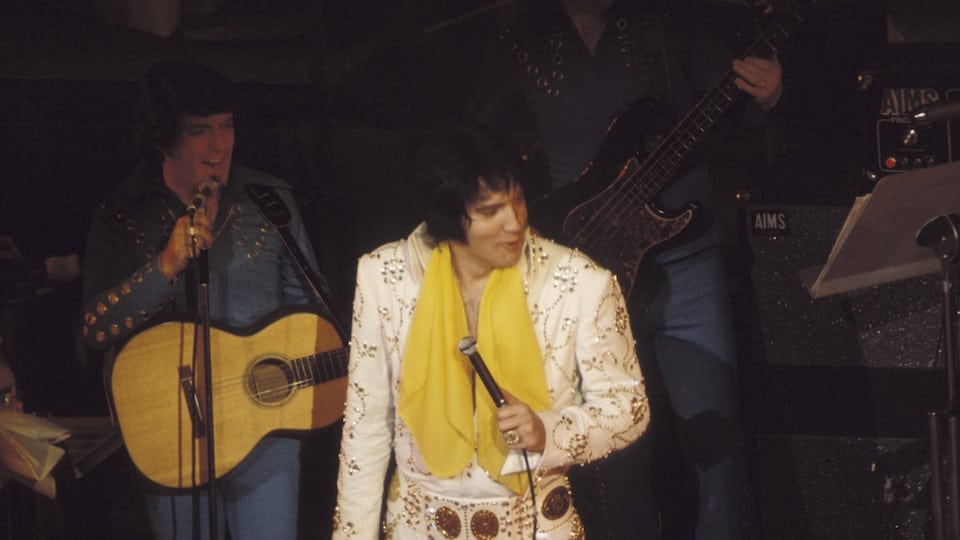 Elvis Presley is associated first and foremost with the ’50s. That’s when the King recorded most of his signature songs, like “Heartbreak Hotel,” “Don’t Be Cruel,” and “Hound Dog.” And while his presence remained formidable throughout the ’60s — “It’s Now or Never,” “Are You Lonesome Tonight,” and “In the Ghetto” — his appeal was still great in the ’70s. How great? Well, two of his singles went Platinum while another seven went Gold. These latter songs may not be as revered today as “All Shook Up” or “Return to Sender” but they’re proof that Elvis in the ’70s was still adding to his historic discography.

Elvis wasn’t just the King of Rock n’ Roll, he also ruled when it came to singing country. Here, he’s got a 20-something Ronnie Milsap on the keyboards for a song penned by Eddie Rabbit — a career breakthrough for the latter. Recorded in 1969, “Kentucky Rain” was released early the following year and went on to become his first gold record of the ’70s.

Even more popular was “The Wonder of You,” Elvis’ first song to hit Number One during this period — albeit on Billboard‘s Adult Contemporary charts. Other earlier versions of this tune were recorded in the ’50s (Ray Peterson, Ronnie Hilton) and the ’60s (The Platters, The Sandpipers) but none quite caught fire like this one — live from Vegas.

This cover of a woeful ballad, his third Gold record in 1970 alone, proved to be sadly prescient of Presley’s marriage to Priscilla: Two years later the couple were divorced. “Oh, I’ve lost you, I’ve lost you / Oh you won’t admit it so / I’ve lost you on the journey / But I can’t remember where or when oh love.”

“Five Films: The Swivel and Sneer of Elvis Presley”

It’s always risky to tackle a number so strongly associated with another singer. While Elvis won’t make you forget Dusty Springfield’s unforgettable version, he at least doesn’t make you miss it while you’re listening to his respectable take on the tune.

Let’s see. Who else has covered this one? Mary Ford. Connie Francis. Kay Starr. Rosemary Clooney. Esther Phillips. Eydie Gormie. Dolly Parton. Anne Murray. And that’s just the women. Who struck Gold when he recorded his version of it? Elvis Presley, of course.

Never one to rest on the laurels of five Gold records in one year, Elvis took his success to another level in 1972 with this Platinum record which in some ways marks the end of an era. It was his last song to crack the Top Ten of Billboard‘s Hot 100. Sadly, it only got as high as Number Two.

In the United States, “Always on My Mind” was the B-side. In the United Kingdom, the order was reversed and “Separate Ways” was relegated to the B-side. Whatever the marketing logic at work was, the record went on to sell over a half-million copies worldwide. It’s weird to remember that we’re now late in his career — although Elvis is only 37 years old at the time.

Was Elvis on the verge of a creative breakthrough at the end? Maybe. This song’s intro has a very different sound before segueing to a honky-tonk vibe that seems to harken to the early part of his career. “Way Down” clearly resonated with his fans, too, as it was the final Platinum record within his lifetime.

Savvy or crass? Whatever you decide, the success of this single no doubt had a lot to do with its being released a few weeks after his death. It’s hard to believe that if such a bit of opportunism happened nowadays, it wouldn’t be savaged by the Twittersphere. But back then it was pure gold.