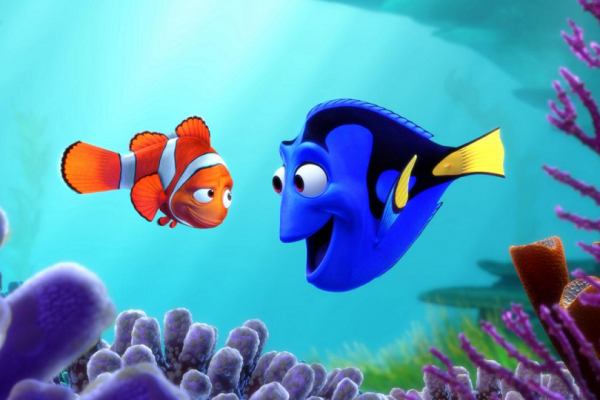 I grew up in a “golden age” of Disney. It started with The Little Mermaid (released when I was seven years old), was followed by Beauty and the Beast and Aladdin, then wrapped up with The Lion King. I would have given anything to see those beloved stories continued on the big screen, but back then, sequels, threequels, etc. were all released straight to video (yes, The Lion King II and similar titles came out on VHS).

These days, sequels, threequels, and prequels rule Hollywood and dominate the box office, hence the (already successful) release of Finding Dory, a sequel to 2003’s much-loved Finding Nemo. I took my kids to see Dory on its first day in theaters (I think I was more excited than they were) and thoroughly enjoyed it. Disney/Pixar has another hit on its hands, largely in part to another brilliant performance by Ellen DeGeneres.

It was DeGeneres’ humor and warmth as the voice of Dory in Finding Nemo that made the blue tang fish with short-term memory loss such a fan favorite – and worthy of her own film. Though Dory was a supporting character last time around, DeGeneres helped her steal the spotlight. This time, it’s all about Dory and her quest to find her parents. We find out that as a baby, Dory (just the cutest little thing) gets swept away in a strong undertow, separating her from her mom and dad. With her short-term memory problems, she quickly forgets who she is looking for and where she comes from.

Finding Nemo writer-director Andrew Stanton returns in his dual role and does a nice job blending the old with the new. We are re-introduced to Nemo and his dad, Marlin the clownfish (voiced by the very funny Albert Brooks), and several other familiar characters make appearances, including Crush the sea turtle and Mr. Ray. There are also some new characters sure to win over audiences, including a sneaky octopus named Hank (voiced by Ed O’Neill), three sea lions with attitude, a loon named Becky, and two whales (don’t forget, Dory speaks whale).

Without giving away any spoilers, I will say this movie mostly takes place in the waters off California (as opposed to Australia in the last movie). This film also employs numerous flashbacks, as the forgetful Dory does remember clues from her past, intertwined with myriad obstacles to overcome.

Just like its predecessor, Finding Dory has a great mix of laughs and heartwarming moments. It’s not only a kids movie – there is plenty for adults to enjoy (there were moments I was laughing out loud). And as with any Disney/Pixar movie, there are some great messages – Dory’s motto “just keep swimming,” be yourself, don’t be afraid, cherish your family, etc.

While I believe Finding Nemo will remain the standard bearer in this franchise, Finding Dory is a fun and worthwhile sequel that holds its own – no fish out of water here! It’s sure to swim right to the top of the box office – and maybe even have you bubbling with joy. Okay, enough puns. But one last hook: make sure you stay until after the credits stop rolling to catch a little surprise.