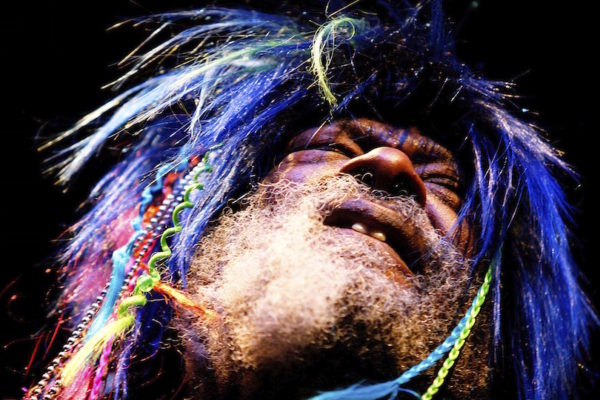 What we’re gonna do right here is go way back to November 28th, 1977. That’s when the universal invaders of Funk known as “Parliament,” led by the “Maggot Overlord” George Clinton drops the latest chapter in an ever-evolving concept. Funkentelechy Vs. The Placebo Syndrome, later described by Funk author Rickey Vincent as the “dawn of a new age,” only features six tracks. But those tracks alter the course of Funk music, as well as Black American music in general. This particular album would go on to become Parliament’s second platinum album, as well one of the best selling albums of 1978.

The unsung heroes of this groove-maneuvered magnum opus include keyboardist Bernie Worrell, bassist William “Bootsy” Collins, guitarist Garry Shider, horn players Fred Wesley and Maceo Parker, and — in his last studio performance with P-Funk — vocalist Glenn Goins. Clinton referees the entire event with the fervor of a psychedelic circus master. What follows is a track-by-track analysis of six master Funk creations that boldly go where no Funk has gone before…or since.

Funkentelechy opens with the unforgettable Glenn Goins on lead vocals. With an industrial-strength groove locked down by bassist Bootsy Collins and Bootsy’s Rubber Band drummer Frankie Kash Waddy, Goins testifies about utilizing the latest artillery invented by Dr. Funkenstein to use against the arch nemesis, Sir Nose D’Voidoffunk. A wise choice for the album’s first single (released in October 1977).

The theme song for the arch villain of Dr. Funkenstein contains musical references to nursery rhymes, Looney Tunes, and Mr. Jinks the Cat, as well as Sir Nose himself declaring his defiance by his refusal to dance. All of this lunacy is anchored by a rock steady-bass powered once again by Bootsy. You’ll have to wait until the end of the record to see who wins!

Professing love in the language of Wall Street closes out side “A,” with Goins and Clinton trading off lead vocals, topped by a sleazy sax solo from ex-James Brown reedman Maceo Parker.

Defined as “a vital vibrational force urging an organism toward self-fulfillment in actuality as opposed to potentiality,” this almost 11-minute cut has gone on to be one of P-Funk’s most celebrated tracks. Anchored once again by Bootsy (bass and drums), the Funk Mob takes on consumerism, Madison Avenue jingles, and pimping of the Pleasure Principle, which — by the end of the song — is rescued with the aid of The Funk.

Dig this definition: “Anything lacking intrinsic remedial value, done or given to humor another.” The instrumental basis for the album’s other title track also marks the return of original Funkadelic bassist Billy “Bass” Nelson who plays against the laser-sharp keyboard work of Bernie Worrell. It also features the very last vocal performance of Goins, who would succumb to Hodgkins Lymphoma on July 29, 1978.

Probably no other record of the rock era, save Sgt. Pepper, ever came to a more satisfying epic climax. Originating as a Bootsy Collins track (he’s also the drummer on this particular jam), the song eventually landed in Parliament’s lap in what can only be called a “Bernie Worrell tour de force.” He locks down all of the primary and secondary keyboard work, as well as working the Moog bass synthesizer. In the process, he creates a fat, pulsating groove that can’t even be replicated by a bass guitar. The harmony part of the song (“da da da di da da da da da da da”) was reportedly inspired by a Jewish bar mitzvah chant. Throw in around 50 chanters, strokers, chokers and clappers, a ridiculous rhythm guitar riff supplied by Bootsy’s older brother Phelps Collins, and some of the freakiest lead singing that George Clinton ever committed to tape, and you’re left with quite possibly the greatest party-on-plastic ever devised by human beings.

In November 1977, The Funkentelechy… album shot to number two on Billboard’s R&B album chart, then was certified Platinum by May 1978. “Flashlight” became the first number one single for the P-Funk organization, as well as the first number one R&B hit for Casablanca Records. That song stayed at the top of the charts for 3 weeks and was eventually certified Gold. The original vinyl release featured an eight-page comic book that explained the conceptual narrative of the record, plus a 22” x 33” color poster of Sir Nose D’Voidoffunk. Needless to say, the album’s influence reverberates through many of today’s hitmakers (“Uptown Funk”, anyone?). America’s favorite Funk family can now take a bow, for giving numerous generations of “Funkateers” a chance to get a little light under the sun.

PS. As a legendary bass player, Bootsy Collins may have influenced these quintessential  80s bass lines.  Plus, take our 7-Day jazz-fusion challenge!

7 comments on “After 40 Years, “Funkentelechy Vs. The Placebo Syndrome” Remains Funkalicious”