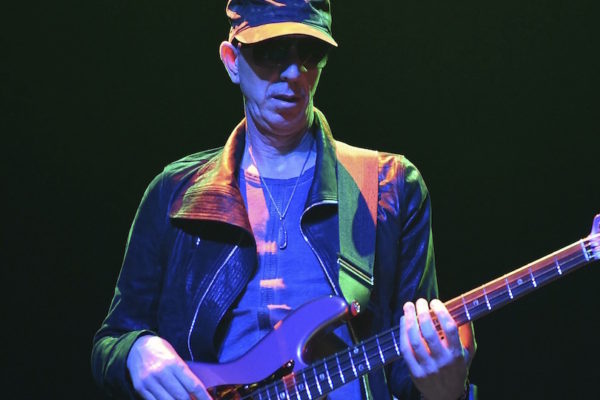 When Leo Fender invented the electric bass guitar in 1951, he ended up shaping the future sound and feel of pop, rock and roll, R&B, soul, reggae, funk, country — and everything in between. Within a few years, bass lines began migrating up from the bottom (“felt but not heard”) to the top, where they not only supported the rhythm and harmony but also offered exciting melodic counterpoints. But by the 1980s, pop music’s love affair with bass had reached a significant peak, with both live and synthesized bass parts filling FM radio with lots of great low-end ear candy. Here are 10 unforgettable bass lines that helped define the sound of that era.

1. Paul Young, “Every Time You Go Away” (Bassist: Pino Palladino)
Welsh bass guitarist Pino Palladino is one of the finest musicians of our time, and alongside Jaco Pastorius, is one of the primary voices on the fretless bass guitar. His thick tone and melodicism made him a valued session player with Pete Townshend, David Gilmour, and Elton John. Pino’s breathtaking fretless counterpoint to Paul Young’s voice here never sacrifices the groove and has kept “Every Time You Go Away” oozing out of radio speakers worldwide since 1984.

2. Deniece Williams, “Let’s Hear It For The Boy” (Moog Bassist: George Duke),
Leave it to a keyboard legend to create one of the catchiest bass lines of the decade! Having made his bones in the jazz/fusion scenes via luminaries Cannonball Adderly, Jean-Luc Ponty, and Frank Zappa, the late, great George Duke became a fixture in the R&B world as a solo artist and collaborator. In 19984, he actually produced this number one hit from the Footloose soundtrack, a song built around a keyboard bass lick so catchy that it’s one of the main hooks.

3. Peter Gabriel, “Sledgehammer” (Bassist: Tony Levin)
Besides being an A-list session player in NYC, Tony Levin’s innovative bass artistry has been a fixture of Peter Gabriel’s band for over four decades. “Sledgehammer” — the first single from Gabriel’s landmark 1986 So album  — marries ‘60s soul and ‘80s technology by way of Tony’s slick, juicy bass line, played on a fretless through an Octave pedal with a pick.

4. Newcleus, “Jam on It” (Synth Bassist: Ben “Cozmo D” Cenac)
Newcleus, a DJ collective in Brooklyn, rocked house and block parties since the late-‘70s. But their smash 1984 single “Jam on It” put them on the map as true hip hop innovators, combining fierce old-school rap skills with electro-modern synthesizer textures. Though the late Bob “Chilly B” Crafton played bass onstage with Newcleus, lead rapper and producer Ben Cenac (“I’m Cozmo D from outer SPACE!”) programmed this mesmerizing two-bar phrase on synth bass. Using only four notes — A, B, C-sharp and E — Cozmo summons the spirit of hip hop’s origins. (Special thanks to Cozmo D for fact-checking with me via Facebook Messenger!)

5. Thompson Twins, “Hold Me Now” (Synth Bassist: Tom Bailey)
This hypnotic, moody track is one of the quintessential ‘80s pop tunes, built on a spacious bed of percussion, marimba, and ethereal synthesizers. That setup left plenty of sonic room for a strong bass line to leave its mark and Tom Bailey’s thick synth bass achieves maximum impact with a minimum of notes; he leaves huge gaps between phrases and drops some tasty fills-in all the right places, including the classic high-register lick in the last verse!

6. Grandmaster Flash and the Furious Five, “White Lines” (Bassist: Doug Wimbish)
Rarely have two notes dropped so much funk! Grandmaster Flash and the Furious Five’s rap classic was built on a homegrown sample of the Sugarhill Records House Band covering “Cavern,” a track by NYC “no wave” band Liquid Liquid. Ensuing lawsuits for “unauthorized use” notwithstanding, Doug Wimbish’s fleet-fingered syncopation propels this track with an irresistible groove. Like “Jam On It,” this one still evokes the energy and urgency of the early days of hip hop.

7. Madonna, “Borderline” (Bassists: Anthony Jackson and Dean Gant)
Madonna’s first top 10 hit lifts a danceable groove with some subtly complex harmonic motion, especially in the chorus. The unique sonic character of the song’s jumpy, driving bass line is the result of Dean Gant’s synth bass expertly doubled by bass guitar virtuoso Anthony Jackson. In the choruses, the bass hits the thirds of the first two chords (C-sharp under the A major, and A-sharp under the F-sharp major). That’s a bold move for pop in any era!

8. Cyndi Lauper, “Time After Time” (Synth Bassist: Rob Hyman)
Initially released in 1983, “Time After Time” was the second single from Cyndi Lauper’s breakthrough debut album She’s So Unusual, and her first to reach number one. Amazingly, the bulk of the track is bass-free; Rob Hyman’s sweet arpeggiated figure only appears in the choruses! Nevertheless, this signature phrase — provided by the song’s co-writer — defines this timeless classic.

9. Howard Jones, “No One Is to Blame” (Bassist: Mo Foster)
There was definitely a surplus of fretless bass on the radio in the ‘80s, as Jaco Pastorius’ new vocab from the jazz/fusion realm entered the mainstream’s ecosystem. But few bassists were as tasteful and creative with the instrument as veteran UK session player Mo Foster. This 1986 track from a Howard Jones album was reworked into a massive radio hit by Phil Collins and Hugh Padgham; bridging the gap between Collins’ powerhouse drumming and Jones’ smooth vocals is Foster’s sinewy, melodic fretwork.

10. Rick James, “Give It To Me, Baby” (Bassist: Rick James or Oscar Alston)
There is some debate as to who actually played this legendary line. The story goes that Rick James would compose the parts, and then teach them to his band members who would then add some signature flair. Regardless of whose hands made this funk, the result is a slice of musical genius: the figure remains the same over two different chords (D-flat minor and G-flat major) but perfectly outlines them both! By jet-propelling both the rhythm and the harmony, the bass line of “Give It to Me, Baby” has been filling dance floors since it first arrived in 1981.

PS.   Wonder what’s up with 80s heartthrob Paul Young?  Here’s the deal.  And we’ve also got the update on Howard Jones.