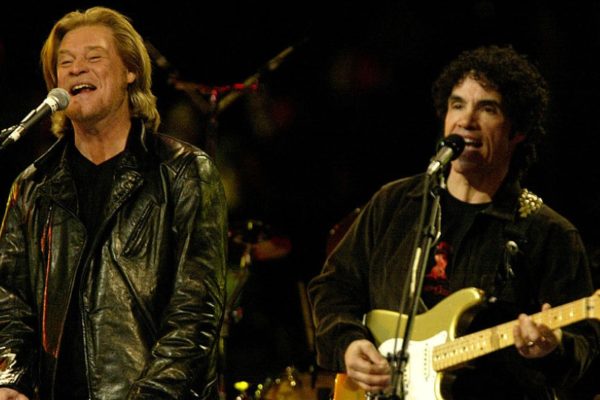 Over the last four decades, Hall & Oates has sold more than 40 million records thereby making these two the third best-selling duo ever. And with six number one hits and 34 charting tunes, the group has definitely struck a chord with the public…repeatedly. But what did we overlook while sampling from their 18 albums of original music? Are there songs that should’ve been singles that weren’t? The short answer is, of course there are. Below are five hits that could’ve been, dating back to their early days as a pair of rockers from Philly on through Big Bam Boom (1984), which marked the end of their era as consistent chart-toppers.

1. “Fall in Philadelphia” from Whole Oates (1972)
This tune shows off some great piano work and sounds somewhat as if it were a collaboration between Elton John and Little Feat. The song starts with Hall and a simple keyboard riff rooted in the blues then segues directly into a New Orleans jazz hook and a funky chorus that then leads into some oh-so-smooth harmonies. Oates keeps the vibe going on guitar while the lyrics recount the struggles the duo faced getting this first album out: “The shower stall is leakin’ / And the ceiling’s fallin’ in / And I’m getting twenty bills to every letter.” Well that grim reality eventually changed!

2. “Nothing at All” from Daryl Hall and John Oates (1975)
At first this one feels very much akin to “Sara Smile” with that noodling intro of muted guitar and synth strings but when the vocals come in, all that changes. This ballad is pure post-breakup as Hall reminisces about what went wrong. (Or is he simply trying to fool himself into thinking that this relationship itself was “nothing at all”?) Admittedly, “Sara Smile” has a more soulful sound but “Nothing at All” is its perfect complement – a dose of blue-eyed melancholy.

3. “It’s Uncanny” from No Goodbyes (1977)
It’s hard to resist this song from the get-go with those opening R&B horns which immediately detour to a groovalicious hook backed by a climbing bass line. The electric guitar fills sound like something from a Dan Fogelberg throwback and a later six-string solo is simple but effective, a treatment the band would take in future releases. Arguably one of the pair’s most joyous recordings, this piece was intended to celebrate Hall’s girlfriend at the time who had the ability to shock him with just how wonderful she made him feel. Listening to “It’s Uncanny,” you’ll share that feeling of pleasure.

4. “The Woman Comes and Goes” from X-Static (1978)
This backroom-of-the-bar rocker features the syncopated keyboard percussion and the sultry sax that would eventually become H&O’s signature. (In particular, the song really seems to foreshadow that later hit of theirs “Adult Education.”) Hall’s vocals are solid; Oates’ harmonies, sweet. Today, the song can almost sound like a pastiche of the band’s techniques but had they released “The Woman Comes and Goes” as a single back in the day, it’s hard to imagine it not getting major rotation on the radio.

5. “Gotta Lotta Nerve (Perfect Perfect)” from Voices (1980)
Hall’s hair was no stranger to New Wave so it makes sense that their discography would include a Devo-style number that’s a bit doo-wop, a bit reggae crunchy-chord progression. Atypical? Sure. But “Gotta Lotta Nerve” is irresistible fun. Audacious? Yes, that too. But as the song says “We’re talking 16 tons of nerve.” For that alone, this should have charted. Why not? The album had four other top 40 singles including “Kiss on My List” and “You Make My Dreams.”

17 comments on “Hall & Oates: 5 Songs That Should’ve Been Hit Singles”