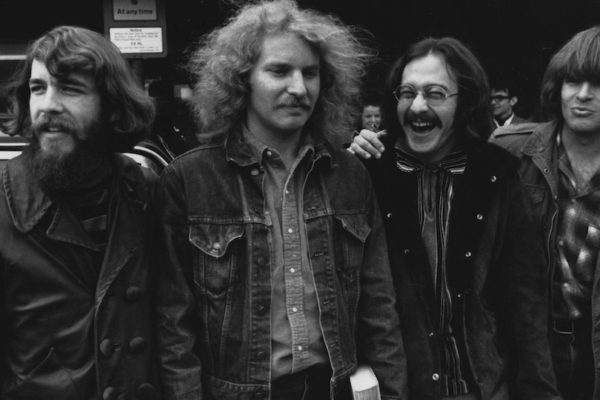 In the last few years, albums that defined the Classic and Progressive rock eras have started to notch their Golden Anniversaries. While the following albums themselves may not qualify for a senior citizen discount, the rock gods who made them earned that right years ago. For kids who’ve already embraced bands like The Beatles, The Who and The Rolling Stones, these albums by new groups/artists of that era further push the limits of rock into new directions. Here are five rock debut albums that celebrate an anniversary and turn “50” this year. Happy birthday, each and every one!

Creedence Clearwater Revival released their self-titled debut in July 1968, the first of seven studio albums in just under four years. (Three were in 1969 alone!) By today’s standard, that kind of output is simply mind-boggling but the band’s first release shows these guys hit the ground running with songs they’d been playing for years under their previous moniker, The Golliwogs. “Suzy Q,” the group’s breakout single, went Gold as it introduced the nation to CCR and the coarse sandpaper vocals of John Fogerty. Not to mention, it had a totally groovy album cover.

James Taylor’s self-titled debut album was his only release under the Apple Records label, but it was the beginning of America’s love affair with the music legend. Released at the end of 1968, the album helped introduce the “California Sound” to the rest of the world and marked the first of seventeen studio albums Taylor has released to date. This particular LP features “Something in the Way She Moves” and “Carolina in My Mind.” (None other than Paul McCartney and George Harrison helped back Taylor on the latter.) Taylor’s discography would sell over 100 million albums worldwide, and it all started with this record.

Prior to 2016, Deep Purple was generally regarded as the most glaring omission to the Rock and Roll Hall of Fame. Having been nominated twice before, the band proved the old maxim that “the third time’s the charm.” Their lengthy discography started in 1968 with Shades of Deep Purple, an album which includes four original tracks and four psychedelic covers, among them “Help!” and “Hey Joe.” But their version of “Hush” is what caught the public’s attention as the track went on to be one of their biggest hits. Although recorded in just three days, the album, like the band itself, was ahead of its time and became an inspiration to future Rock n’ Roll Hall of Famers like Gene Simmons, Slash, and Lars Ulrich.

When John Kay belted out the words to “Born to be Wild,” thousands of young America jumped in their muscle cars and took to the highways. Steppenwolf’s quintessential road trip song was featured in the movie Easy Rider, as was another of the album’s tracks “The Pusher” which plays during the scene in which Peter Fonda stuffs cash into his motorcycle’s gas tank after making a drug deal. The album reached number six on Billboard’s Album Chart and went Gold. Steppenwolf’s debut record set the table for the band’s vocal driven melodies and we’re still eating it up.

Jeff Beck didn’t give his debut LP his name which might be why it falls on a seminal list of overlooked masterpieces. Released in August of 1968, the album features both credited and uncredited collaborations from Rod Stewart, Ronnie Wood, Keith Moon, Jimmy Page, and John Paul Jones. The album combined blues and hard rock in a way that has arguably never been duplicated. Tracks like “Shapes of Things,” “Morning Dew,” and “Rock My Plimsoul” are as perfect examples of this artist’s rock-blues fusion mastery as you’re going to find. If released today, Truth would be just as cutting edge as it was 50 years ago.

PS. Another funky classic from George Clinton and Parliament celebrates an anniversary.  And 30-plus years later, Sting’s solo debut album, “The Dream of the Blue Turtles,” still resonates.