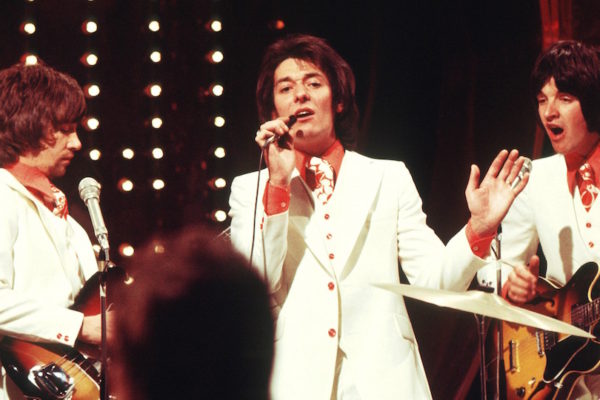 Hollies Sing Dylan (1969) — released stateside as The Hollies, Words, and Music by Bob Dylan — is a lot more folk-pop than folk-rock. The album focuses almost exclusively on Dylan’s best-known songs with “The Times They Are a-Changin’,” “Blowin’ in the Wind,” and a very faithful “I Want You” all in the mix. This was The Hollies’ first album to be released without Graham Nash, who was at odds with the project, even as Dylan went on to give it his blessing. (Both Nash’s singer-guitarist replacement Terry Sylvester and drummer Bobby Elliott recall how Dylan sent the band a thank-you note upon the LP’s release.) Dylan wasn’t the only one who appreciated it: the album climbed to Number Three on the UK charts. Below are the best of the best tracks.

1. “When the Ship Comes In”
This opening track has a rollicking spirit that reminds you of contemporary alt-rockers like Mumford & Sons, propelled as it is by a strumming banjo and some winning upbeat harmonies. Frankly, it also recalls the hootenanny style popularized by the Kingston Trio and New Christy Minstrels of the 1960s. Whether your references are retro or neo-retro, this rendition lives up to the lyric, “A song will lift / As the mainsail shifts…”

2. “This Wheel’s on Fire”
Want to hear Dylan rock by way of The Hollies? Then this is your song. While this particular rendition might not achieve the psychedelic atmospherics of Julie Driscoll’s take from the year before, this go-go worthy version does feature more-than-admirable Roger McGuinn-styled guitar playing by Tony Hicks and driving drum work by the always-superb Bobby Elliott. Dancing to Dylan? You may feel compelled.

3.” Blowin’ In The Wind”
“Blowin’ In The Wind” is one of Dylan’s most covered songs with several hundred versions by everyone from Stevie Wonder to Pete Seeger. This one, the Hollies’ only Dylan cover to include Graham Nash (which you can hear as a bonus track on later CD reissues), differs from most in that its more about the melody than the lyrics; the lush strings, cabaret horns, and a swingin’ drum beat are more likely to catch your ear than the unconventional “blow-whoa-whoa-whoa-whoa-in’ in the winds” refrain. Peter, Paul, and Mary, this is not.

4. “Quit Your Low Down Ways”
This may be the least known of Dylan’s songs on the album but as frontman Allan Clarke says in the video below “We’ve always liked folk music” which explains part of the appeal of doing a Dylan album and why they picked this tune which was originally recorded by Peter, Paul and Mary on their In the Wind album” (1963). Upbeat country blues might not be what you’d expect from a band that was part of the British Invasion but excellent harmony vocals by Terry Sylvester and great acoustic fills by Tony Hicks deliver the goods —  and then some.

5. “My Back Pages”
The multilayered orchestration works really nicely on this one which boasts a very L.A. pro-duction sound reminiscent of the Wrecking Crew (the famed session musicians who backed the Mamas and Papas, and the Beach Boys among others) with the flute in the background adding an especially whimsical touch. People still debate of the lyric “Ah, but I was so much older then, I’m younger than that now.” What do you think after listening to The Hollies version?

0 comments on “The Top 5 Dylan Covers by The Hollies”