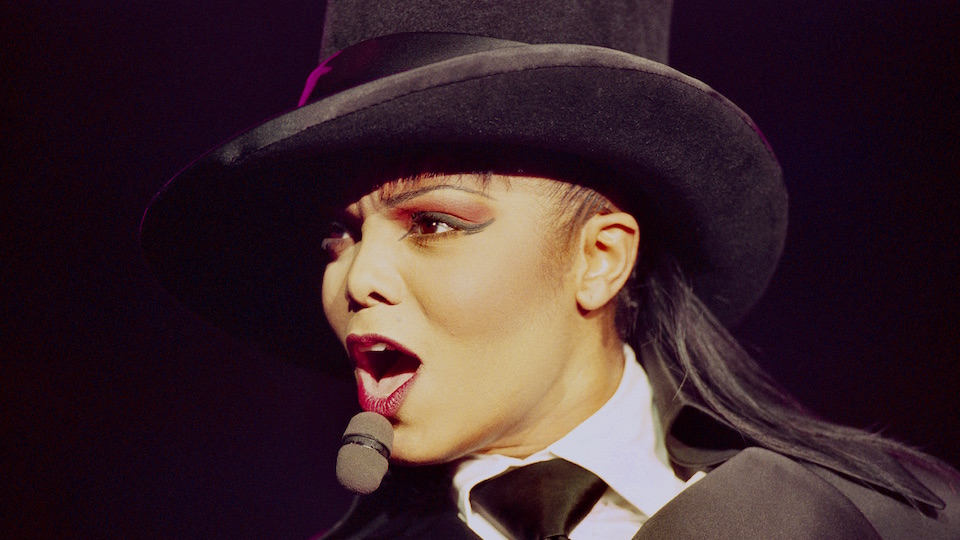 Glory Hallelujah! After more than a decade of oversight and controversy, pop superstar Janet Jackson will be officially inducted into the Rock ‘n Roll Fame next month. One of the foremost divas of the music industry and, according to the 2008 Business Wire, “…one of the top ten selling artists in the history of contemporary music,” her legacy is wide-ranging, ever-changing and profound. Her Jackson dynasty connection is but the tip of the iceberg: Janet Jackson has influenced dance, fashion, and performance for decades.

Janet was the baby daughter of the storied Jackson family, born in Gary, Indiana on May 16, 1966. She was talented from the outset but receded in the shadows of The Jackson 5 and, later, brother Michael. She began her ascent to fame as a child actress in sitcoms like Good Times, Diff’rent Strokes and Fame.  She released two standard pop albums in the early ‘80s (Janet Jackson and Dream Street). They did passably well but were no match for the “Michaelmania” of the time.

All this changed in 1986. Janet made the courageous choice to not only break free of the stranglehold of her father Joe’s grasp but to sing about it as an emancipated young woman. She collaborated with producers Jimmy Jam and Terry Lewis on her Control LP and caused a sensation. She busted innovative dance moves, sharpened her look to a sexy, urban-militia gloss and performed songs about independence, freedom, and empowerment. Tracks like “Nasty,” “What Have You Done for Me Lately,” “Control” and “The Pleasure Principle” ruled the radio and MTV airwaves. The album swept the Grammys and the American Music Awards and sold over 10 million copies. Her superstardom was assured.

She kept up the extraordinary string of hits and increasing influence with her follow-up Rhythm Nation 1814 in 1989. This album upped the ante with songs about social injustice, sexual harassment, crime and romance without missing the proverbial beat. Rhythm Nation outsold its predecessor handily and encompassed a variety of musical styles. Songs like “Rhythm Nation,” “Escapade,” and “Black Cat” remain enduring standards. She also excelled in the music-video arena. Her urban grooves and distinctive dance steps set a standard equaled by few.

But the hit track “Love Will Never Do (Without You)” broke the mold with a dazzling video that showed her softer side. Produced by the late great fashion photographer Herb Ritts, the images of an incandescent Janet romping in the desert, every inch the joyous goddess, gave her even more impact.

The 1990s and 2000s brought additional hit albums: Janet, The Velvet Rope, All For You, Damita Jo, 20 Y. O., Discipline, and Unbreakable. Her tracks always feature crisp production values, abundant carnality, and driving rhythms. She also brought a luminous screen presence to movies like 1993’s Poetic Justice. And while maintaining a distinct air of mystery, she’s been open about her struggles with anxiety, depression and fluctuating weight issues.

Of course,  we can’t ignore the bejeweled bare breast in the room. In 2004, Janet was the NFL halftime performer for Superbowl XXXVIII, where she performed a medley of her hits. But when surprise guest Justin Timberlake showed up for a duet of “Rock Your Body,” things went…surreal. In a move that became the topic of absurd viral contention, he tore open her costume, revealing her bare breast (embellished with some gold jewelry) and brought the ire of millions who objected to this piece of mild salaciousness on a family show. Timberlake and Jackson issued post-game apologies; Janet’s was seen as lukewarm and Timberlake’s description of the event as a “wardrobe malfunction” had a nation in derisive laughter and put that little sound bite into the lexicon, where it remains.

Jackson paid dearly for all of this. Disgraced former CEO and Chairman of CBS Les Moonves was furious at what he believed was a deliberate stunt (we’ll likely never know). It’s widely believed that he kept her music off the airwaves for years following the event.

Still, true divas cannot be quashed. Janet remains a beloved and enduring pop icon, bringing her breathy voice and superb strut to a massive output of hip hop, R&B, New Jack Swing and ballads of love and empowerment. A charismatic beauty, survivor, voice of integrity and now mom of a young child, her stake in the music firmament is secure. The long-awaited acknowledgment by the Rock ‘n Roll Hall of Fame is something to celebrate with powerful beats and dancing in the streets.

0 comments on “It’s Janet…Miss Jackson, If You’re Entering the Rock Hall of Fame”