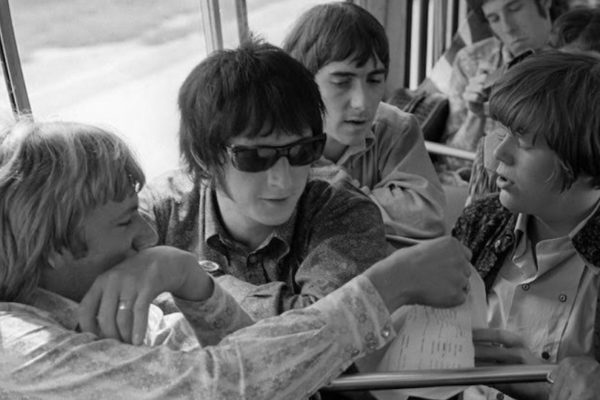 By now we’ve all seen Robert Maplethorpe’s photos of Patti Smith, Linda McCartney’s shots of her husband Paul, and Andy Warhol’s prints of the Rolling Stones. So where do you go for a fresh look at the icons of rock n’ roll? A good place to start is Jeff Hochberg’s amazing collection of Unpublished Rare Rock & Jazz Photos which features astonishing images of such legends as The Beatles, Lou Reed, and Chuck Berry; contemporary icons like Beck and Green Day; and even non-music celebs like Muhammad Ali. To get a limited edition print of one of these luminaries, click here. To learn more on how this massive collection came to be, read our interview with Hochberg below.

Q: Let’s start with the basics. How did you get into collecting photos?

A: I’ve always loved the end result of the photographic process: the image, on paper. My first important camera was one of those old Kodak Disc cameras. Great for school-aged kids — likened to today’s mediocre gear on a low-end smartphone of today. I then went on shooting with an old Nikon film point-and-shoot. At around that same time (around 1986), I began collecting anything and everything that had to do with Jimi Hendrix. While the collection began primarily with posters and other ephemera, I started buying limited edition photographic prints in the late 1990s. Around the same time, I started buying negatives whenever I could find them. This is pre-eBay, so my main lead source was Goldmine magazine. And, once I started, I never looked back.

Q: How did the larger Unpublished Rare Rock & Jazz Photos Archive come to be?

A: The first collections I remember acquiring were photos of Beck and Green Day from the 1998 Virgin Music Festival in the UK, and a set of Phish playing Cincinnati in 1992. I sat on these negatives (probably around 500 images) for years before actually digitizing them. For more than a decade, I was buying up lots wherever I could find them. I never invested the time, money or energy into digitizing these negatives, so it wasn’t until 2011 that I had them converted to digital files and printed. Since then, over the past six years, I’ve added some real treasures to the collection. I didn’t consider it to be “world-class” until I picked up the Tom Morton archives.

Q: Do you have an interesting back story regarding any particular group of photos in the current collection?

A: I spent nearly four years trying to convince Tom Morton to sell me his archive. While the negatives were sitting safely in his office, no one was getting any enjoyment out of them. I explained to Tom that my goal when it comes to collecting is to have access to images that don’t exist anywhere else in the world. I simply wanted to be the only person in the world with these beautiful images on my wall. That resonated with him and we agreed on a price. I flew to Texas a few weeks later to pay the balance and pick up the collection. While there, I asked what else he had stored away. He did some digging and came up with a few plastic crates of negatives. Each set was stored in it’s own wax envelope noted with the subject’s name. I missed my flight home because we ended up spending about three hours going through the boxes. In the end, I came home with more than I knew even existed. And that, today, really anchors the collection.

Q: How many different photographers are currently represented in the archive? How many photos?

A: There are probably two dozen photographers whose work is represented in the collection. The entire collection consists of tens of thousands of images but I would say there are maybe 5,000 that are “wall-ready.” I’ve spent a lot of time over the past two years trying to cull the collection down to 250 images to put in a “look-book” but I’m still stuck at over 1,000 images. There are just too many beautiful shots of my favorite bands to pick out a top 250. Think about this: When you have over 80 professionally-shot images of The Beatles — some of John and Paul, some of all four, some of just George, Ringo, et cetera — how do you choose a favorite?

Q: What’s the most popular photo within the collection and why do you think that is?

A: For me, the holy grail is this: Harry Benson with Cassius Clay (not yet Ali) and the Beatles in Miami as Clay preps for one of the biggest and most important boxing matches of the century. We have a complete set of six pristine images in color! These are the only images from that day — the single most iconic image in sports and rock n’ roll history — that were shot in color, and they’re in our collection. They weren’t shot by Harry Benson, but they’re of equal quality and the subject is exactly the same.

Q: What are your newest additions to the collection?

A: The newest edition came during springtime. I was looking for a photo display unit to showcase images in a pop-up environment. I drove about two hours west into New Jersey and come across some backwoods recluse who is rebuilding ’70s Jaguars in his driveway and literally sitting on top of the most impressive collection of glass plate negatives I’ve ever seen. I explain that I’m here for the display case but if he has anything — anything — that’s related to rock or jazz to let me know. His response, “You know, I have some boxes of Bowie and a bunch of others playing the Cap in Passaic in the ‘70s. Is this the stuff you’re interested in?” As far as I can tell, these are the moments that we wait for. Guy comes back with a few bags and we start sifting through. There are slide canisters somewhat organized by band. There are envelopes labeled by band. No real reference to data, venue, city… That’s the bad news. The good news is that there were thousands of negatives and slides and I see names like David Bowie, Lou Reed, The Who, Rod Stewart, Wings, Dylan, Chuck Berry, David Crosby, and Sha Na Na. I ask him what he wants for the collection and he tells me to make him an offer. We both walked away happy.

Photo by Tom Morton: The Who and Peter Noone from Herman’s Hermits